Max's school year is getting off to a good start.

While his homebound teacher was getting curriculum from the school, they spent the first two weeks of school working on a lesson about apples.

Max watched some videos on apples and read books, but the funnest part was walking to the little orchard in our neighborhood and picking apples and making applesauce with them.

It was a little toasty, but we took a field trip and walked over to check out the different types of trees in the park. 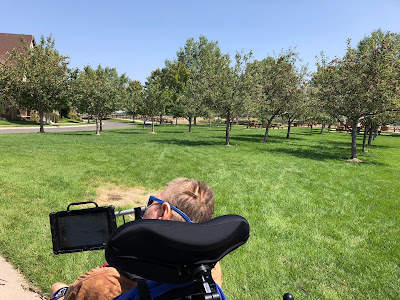 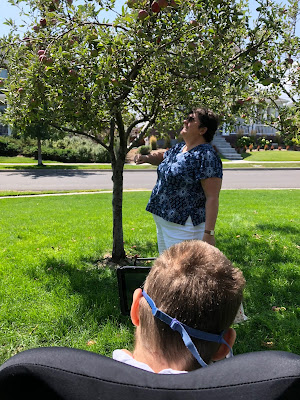 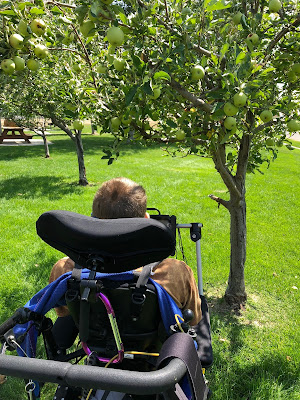 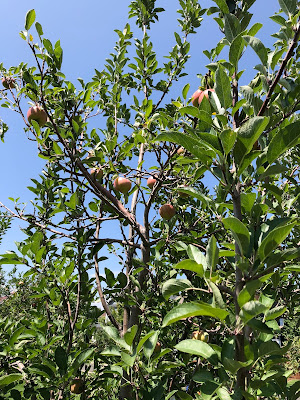 He picked from five different trees and brought them home. 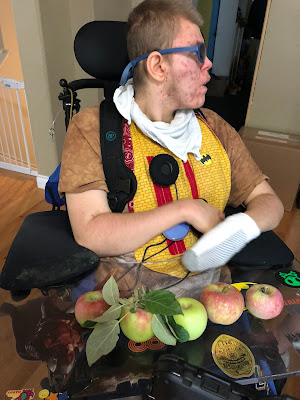 They read a book about going apple picking, at the end of the story the kids made an apple pie.  This gave Max an idea. 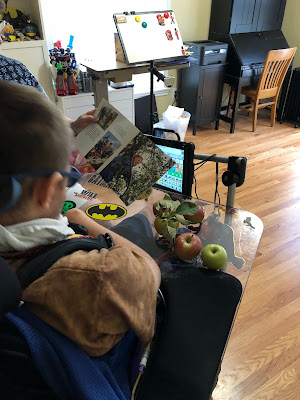 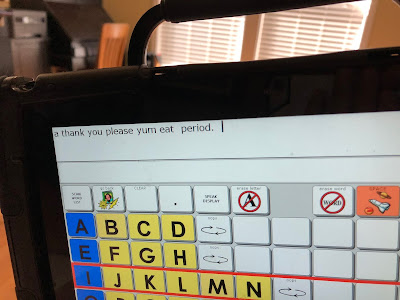 He and his teacher decided to cook with the apples they picked too! 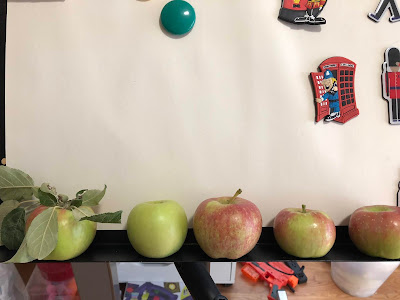 They decided to make applesauce! I bought a few apples to supplement, but Max only wanted to use his apples.  His teacher suggested they could read another book about apples, but Max was ready to cook. "We should do it now period. peel apple now" 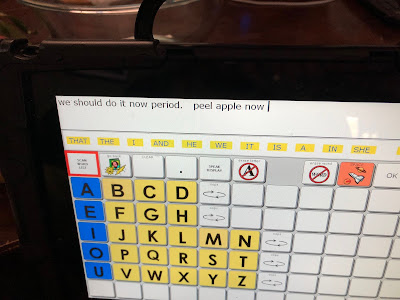 While she was peeling his apples, she told him the steps to making the applesauce for him to spell out. 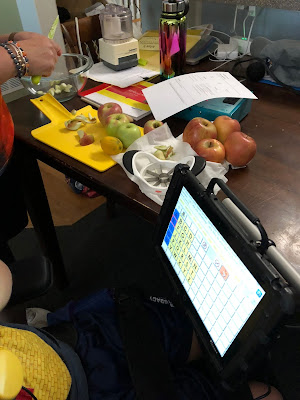 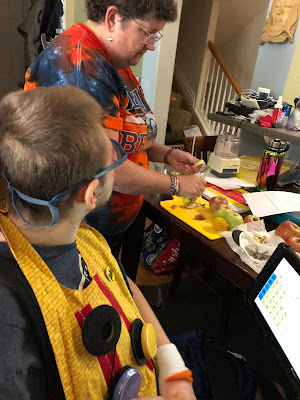 While she was peeling and cutting the apples, Max was chatting with us.  He asked his nurse Rachel if she thought it was cool, and asked her to turn on some soft music. Mrs. B. asked him how many more apples did she have to peel since she had already peeled two.

He said "3 you don't know how many apples." (Teenager attitude?) 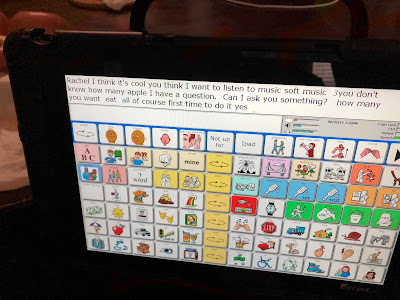 He got to smell the apples.  And the lemon that went into the recipe so they didn't turn brown. 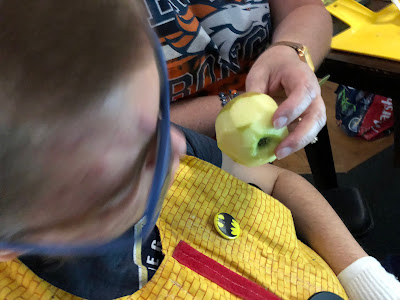 That got his taste buds going.  He was ready to try it! 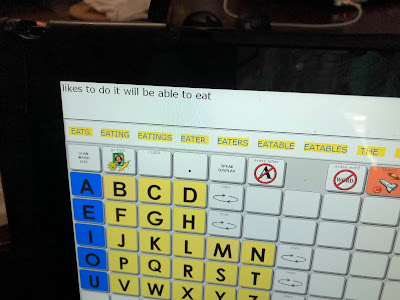 But first they had to cook the apples. 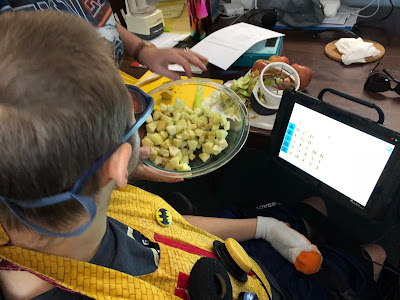 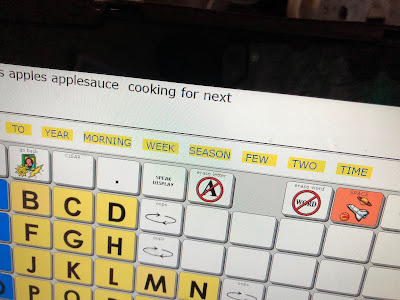 After the apples were cooked, they went into the food processor that was hooked up to a plug in machine that Max's switch plugs into so he can control it. 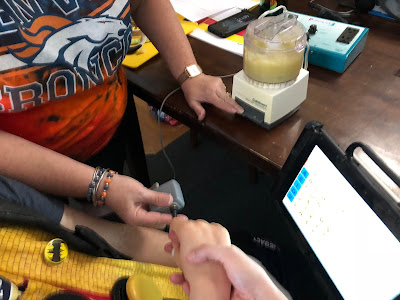 The final product, applesauce made by Max. 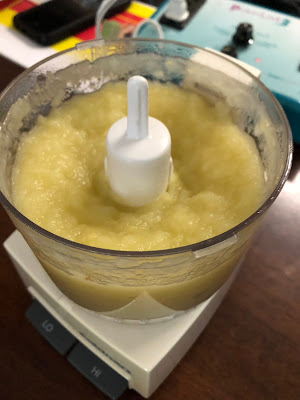 He got to smell it and see it up close. 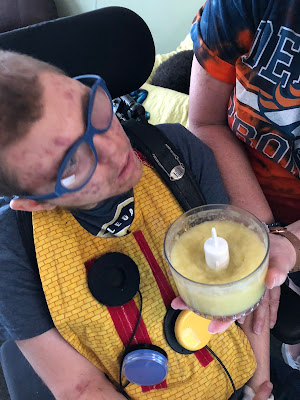 But he really wanted to taste it. As a reminder, Max does not eat much of anything by mouth.  He takes tastes but he's not able to control it all in his mouth to get enough for growing.  Feeding Max was always a struggle before he got his g-tube.  Now it's just for fun. 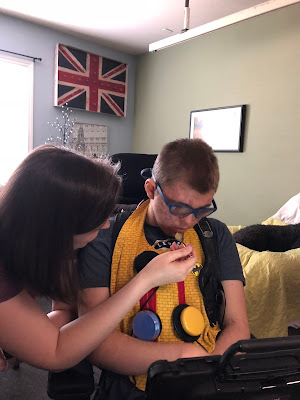 He thought it tasted yum! And then he called his dog George over to try a bite. He thought that was really funny! 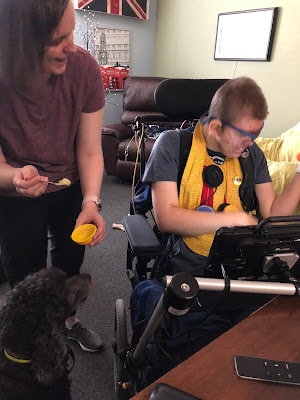 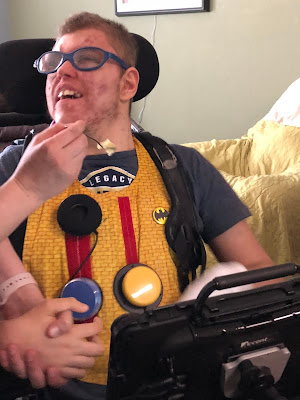 It was a lot of fun for Max to get to pick his apples from the tree, and then make them into something he could enjoy.
Posted by Deana at 10:03 PM