Just look at this tired Momma. With her ragdoll little baby.
She thought that was the most tired she could ever feel. She thought it was the most traumatic thing she could imagine watching her baby struggle to breathe. She thought he was heavy then! She was so tired when this picture was taken, but had so much optimism because after a month of failed attempts, he coughed the breathing tube out and changed the direction of his life.
I sometimes look back on old photos and think, "What would I tell her if I could?"
I wouldn't tell her about all the hard days and hard nights they'll still have. I wouldn't tell her how many more days and nights she would spend in one of those hospital chairs. I wouldn't tell her that she has no idea what tired is yet. I wouldn't tell her that the traumatic experiences were just beginning (although, I might tell her to find a therapist sooner). I wouldn't tell her there would be days she feels hopeless from lack of help, or lack of services, or from constantly fighting for his right to survive and thrive. I sure wouldn't tell her he would outgrow her - because the idea of moving a man baby around might have crushed her spirits altogether.
I would tell her, "Love him every day for the rest of his life like it's December 1, 2004. Cheer on every thing he accomplishes, no matter how small it seems. Teach him new things. Teach the whole world about him. Show him new places. Let him hear the roar of the ocean and feel the grass from another country under his feet. Teach him to read, and talk, and sing. And let him teach you, he will be your greatest teacher. Give him everything you can, so he has the best life he can have. Because you may not know it now, but on December 1, 2004 he is showing you that's what he wants."
Happy Extubation Day 2021. The day in our family we celebrate the day the lion roared.
Posted by Deana at 5:29 PM No comments:

I think the best way to come back to the blog after nearly two years away is to post about the boy who lived turning 18 years old today.

Max has been looking forward to being an "old man" for months, and it's finally here.  He made plans on his AAC device, and gave us an entire week to pull it together.

Max has spent the entirety of 2020 and 2021 indoors, without visitors save for a few visits from his aunt and cousin, a pop in here and there through the window from his people (all his therapists and teacher had to stop coming for in home visits)
, and the few times he's gone to the hospital for appointments. He doesn't have any nursing coverage (since June), so it's been a lonely almost two years. 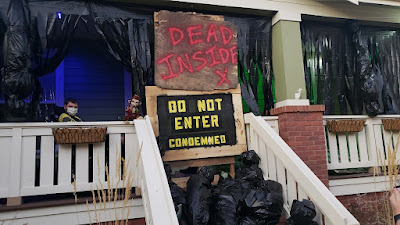 He got to see almost everyone on his list and everyone was so awesome to come give him his birthday wish.  For the night of Halloween, he was able to hear all the trick-or-treaters outside and even got sung to by a group of neighbors.

He got phone calls from Pops and Great-Grandfather and Nanaw and heard messages from lots of other people.  He will have some ice cream soon (he likes tiny bites of vanilla ice cream), and then hopefully have lots of dreams filled with visions of all his own people coming to visit him for his birthday. 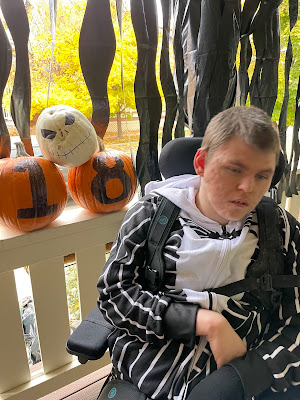 Happy 18th birthday, Monster Max.  I can't wait to see how adulthood looks like for you, because you had such an incredible, one of a kind childhood!

This old blog just isn't what it used to be.  I used to update often about all of Max's news, but last year he didn't want to be online.  And that's okay...it is, after-all, his life story.  But, I am going to sneak in here and give an update on first day of school and if he'll let me, I might be able to update more.  He's doing really well, and we're really just in a routine of living life with our now TENTH GRADER!!! 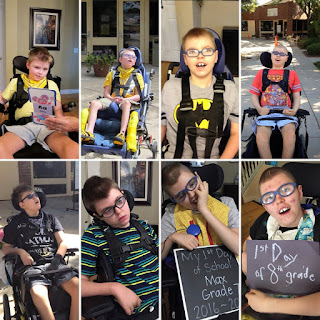 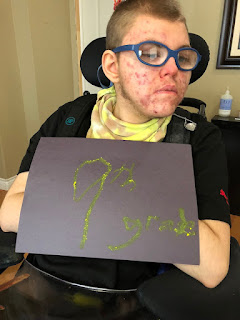 And now, Grade 10.  He's such a funny guy, and so sharp. He wanted to wear his dad's t-shirt for his first day of school.  And wanted to write his sign on blue paper and red marker. 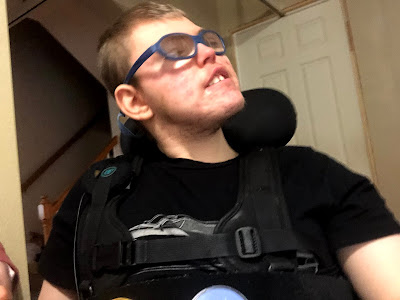 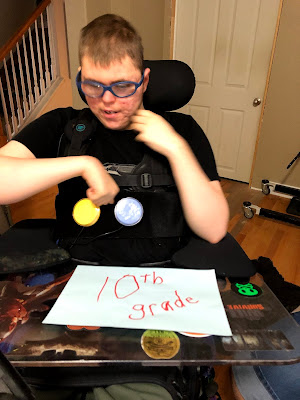 His biggest interests right now are listening to The Beatles, and fastest fast cars. It's been a terribly hot summer, but he's enjoying going on evening strolls when it's cooler.

He's hoping for a great school-year and of course we want that for him too. Here he goes...Sophomore Max.
Posted by Deana at 11:52 PM No comments: