Summer has come and gone and now it's time for another milestone in the life of Max.

I've had all summer (most of which Max was feeling poorly, again) to consider that my baby boy was going to be starting high school.  But it didn't hit me until today just what a really big huge incredible deal it is that he is in high school.

It isn't ever lost on us how special it is that he made it another year.  I'd be lying if I said I was certain we would make it to this day.  He's still the boy who defies all odds and has now made it to his first day of 9th grade. 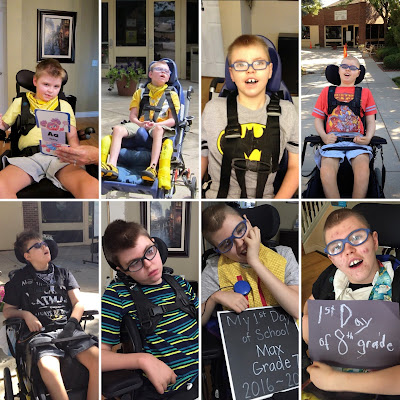 He was so ready for school today that he sat in his chair and talked with his teacher for two straight hours.  I don't know that we could stitch together two hours a week last year for most of his school year. 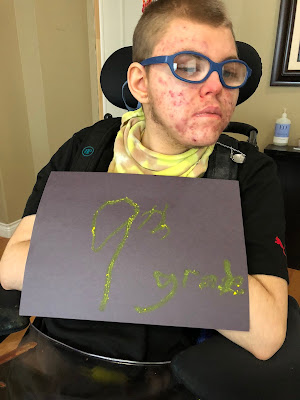 Max picked out his first day of high school shirt and was excited to wear it this morning.

Last year was the year of the lion, and the year before that was sea turtles.  This year ... he's all about FAST CARS!

He wanted to wear a yellow Ferrari shirt for his first day of high school. 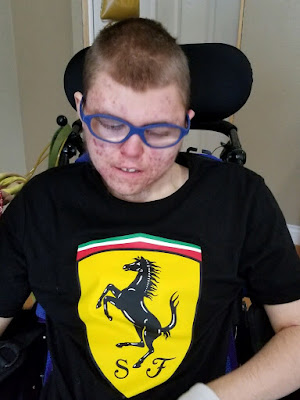 After catching up with each other, Max and his teacher got right to work on his first high school project. He's writing a short autobiography for his classmates to learn more about him.

He answered some of the letters his new classmates sent him.  There were a lot of questions about what he likes to do, and how many pets he has, and what is his favorite animal.

He greeted them all with "Hey, what's up? Long time no see!" In answer to what did he do this summer - "Fun playing. For a little while I was sick."

When his teacher asked him about high school he said, "hard and boy embarrassed...new people have been able to go to some time high school. "  We both told him we were sorry he was feeling embarrassed, but all the 9th graders are starting something new and they probably have been feeling the same way.

He said middle school was "awful boredom. Important for me to go on to high school. at last fun!"

His teacher read him a first day of school book and they visited some more before Max let her know he wanted to do some more work. He wanted to make a high school picture.  So they looked up his new school's emblem and he made that as his first piece of art for the new school year. 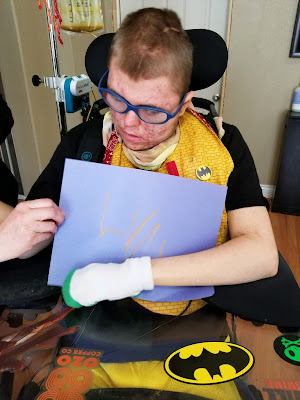 Max is ready for the new adventure!  Hopefully high school is all he thinks it will be!
Posted by Deana at 12:02 AM