Since the spring, Max has been having random fevers, malaise, and several trips to the hospital to try to figure out what is making him act sick, but not actually be sick.  He has been to the ER 3 times and had several visits with his PCP and specialists about what might be going on.

They have run tests on his blood, and cultured samples from his nose and fluid from spots on his face and nothing has shown up as alarming.

Through all of this time, the acne on his face has progressed to be more and more irritated and painful to him.  We chalked it up to him being on testosterone replacement therapy, which he will be on for the rest of his life since he can't make testosterone on his own.

When we changed the testosterone treatment to a smaller amount weekly in the spring, we saw the symptoms start to show up and the acne (first diagnosed as cystic acne) started to worsen.

This collection of photos shows the progression from April 2017 - January 2018. 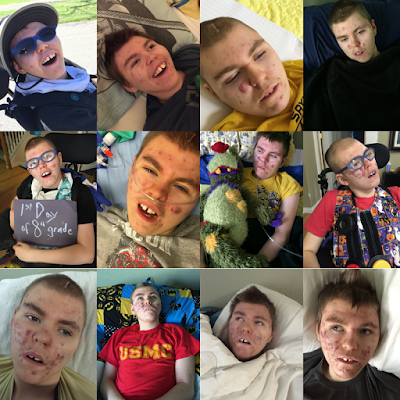 In the late spring/early summer, he was struggling with headaches.  We didn't know why they started so suddenly but they were miserable for him and we ended up starting a migraine medicine.  The headaches have since gone away for the most part, but then we started seeing him having trouble breathing in the late summer, and fevers spiking, then running in the low-grade range when they weren't spiking.  He was on oxygen two times,  and in the ER 3 times.

By fall he was having more regular fevers, and really not wanting to participate in therapies or school.  He was more tired than usual and we really started to see the eruption of acne progress to other areas of his body besides his face.  Once winter rolled around, we were in frequent contact with his PCP and specialists trying to figure out what was going on with him.  The fevers were high and consistent.

This week it all came together when I sent a set of photos to his pediatrician who had us get culture kits to collect samples of the output of pus from the spots on his face, back, and arm. Nothing grew from the cultures, but he was suspect because of the color.  (I'm not posting those photos...you do not want to see them.) When nothing grew, he consulted again with the head of Dermatology who said we have to get him in right away.

Yesterday we took him in to see the Dermatologist and he was diagnosed quickly with a severe, rare form of acne called Acne Fulminans.  We are still learning about it, and how it has affected Max, but it's basically a sudden, painful, ulcerated acne.  It's systemic, so that means it affects the entire body.  It can have muscle and joint pain along with very painful ulcerated acne. It's acute, so it comes on quickly and hopefully with treatment it will go away.

Of course when we started looking into it were so grateful we caught it when we did.  This is a terrible form of acne and can get out of hand quickly.  There doesn't seem to be a lot of literature on it. But what we have read all says it's a rare skin disorder, looks like around 200 cases known.  We chuckled when we read it's rare....we wouldn't expect anything else from our rare guy.  Just add it to the list of rare conditions he has.

We will be following up pretty frequently with Dermatology, possibly Rheumatology, Endocrinology, and his PCP who focuses in complex medical needs pediatrics.  It's a lot of trips to the one place we try to avoid this time of year, but they are all being incredible about keeping him as safe from germs as possible, and moving schedules around to try to avoid him having to be admitted.

He started the treatment this morning, Prednisone, which he'll be on for four weeks. The teams are all discussing how they will move forward with the second part of treatment, which is Isotretinoin...or Accutane.  It has side effects that make everyone slow down and make sure it will work with all of Max's other unique medical needs.  We have four weeks to get that worked out before starting it.

About an hour after we gave him the first dose of Prednisone this morning, he started sweating, and sweat for 8 hours.  It was the first day in months and months that Max didn't have a fever! He was talkative and interactive too.  We're hoping he won't have too many side effects from the steroid and certainly hope that we are able to keep him away from germs since we know steroids can lower immunity.

So that's the new diagnosis.  Be hopeful with us that it will all clear up soon and we'll be able to see our happy, sweet boy's face again without all the painful spots.

I'm adding a collection of pictures below for anyone who ends up searching for Acne Fulminans. If you don't want to see it, stop reading here.

Since it is so rare, there aren't a lot of photos online of examples.  We wished we had found more photos to compare to when we were researching it.

I’m so sorry that Max is suffering — and you, too. I hope he continues to heal. I’m also wondering — of course — why he can’t use cannabis medicine. Its anti-inflammatory effects are well-documented, it is anti-microbial and acts as a neuro-protectant. I understand that Max is exquisitely sensitive, but I feel certain it would do no harm and could actually really help to alleviate some of his symptoms.

Elizabeth, could you point me to the documentation for the anti-inflammatory effects you've found so I can read them? I didn't even think of it!