Steve tells me all the time, "He's not a baby." To which I respond every time, "He's MY baby."

Another page has turned on the calendar and our big guy is 14 years old now.  The really does seem pretty old...but still my baby.

Max woke up happy and ready for a very fun birthday. He's been talking about going to the zoo for several weeks.  He wanted to see the lions, which to him are the BEST. Period.

He gave a list of people he wanted to go to the zoo with him, his cousin and aunt, and grandparents too.

Then he gave a list of all the animals he wanted to see.  Thankfully his cousin knows the zoo really well and was a great guide. Max loved every minute of it. 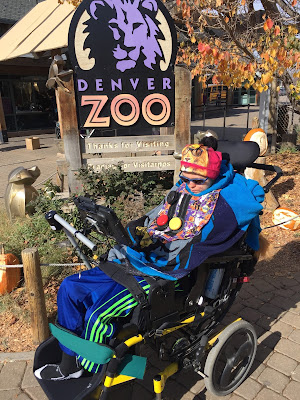 The main (mane) thing he wanted to see was the lions.  They were feeling pretty lazy in the sunshine, but one walked up a bit closer for him to see. 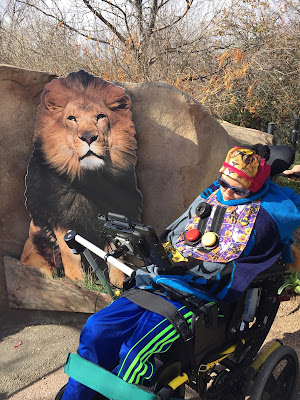 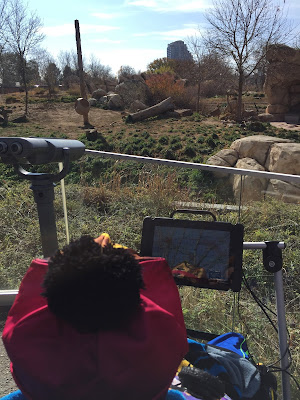 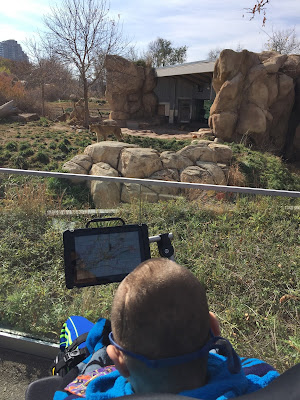 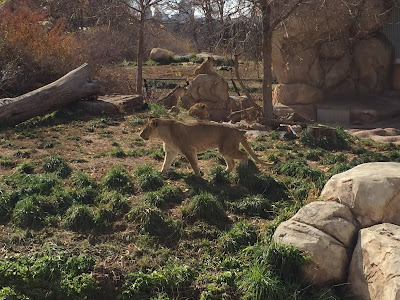 This is as close as he could get to seeing a lion up close. 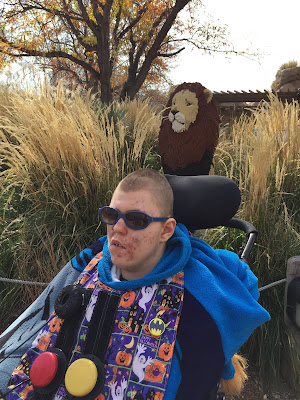 The giraffe was eating so he got to him up close.  The zoo is definitely isn't the best place for the visually impaired, so it's really great when we can get him up close to the animals. 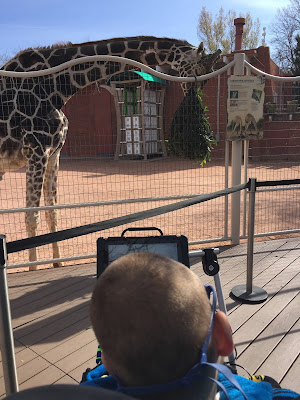 The baby giraffe was interested in Max and his cousin. 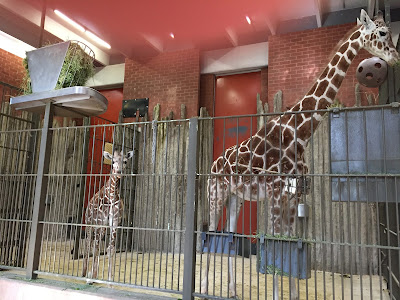 Max said "Play. I need."  I think we all would love to play with that baby giraffe! 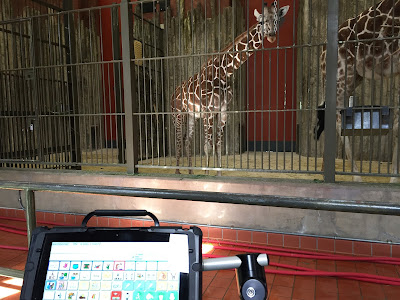 His next request was to ride on the carousel.  We found the lion!! 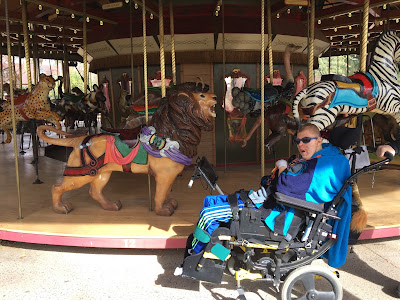 They have a designated space for wheelchairs, right where the ramp is attached.  Max's Grammy and Grampy rode behind him.  Daddy right beside him, and the rest of us were right in front of him. 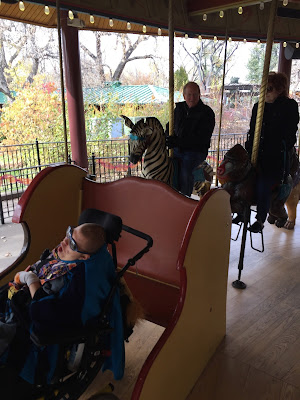 This is what Max had to say about the carousel ride.
I think he would have spent all the time on the carousel.  He squealed and laughed and danced.  We need to remember how much he loves it!! But, there were more animals on his list.  He wanted to see monkeys, so we made our way to the primates.  This is the only one who caught his attention. 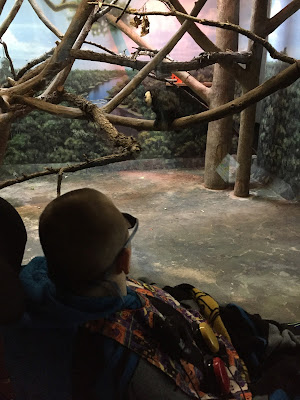 The baby gorilla was out and playing.  He liked seeing the gorillas, and orangutan - who was playing so much it was hard to get a good photo of. 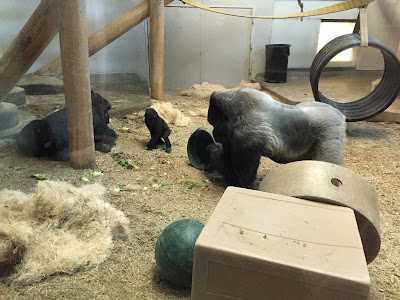 And lastly, we were looking for a baboon - at his request, but found this mandrill instead, and may have told him it was a baboon. It was up close and easy to see. 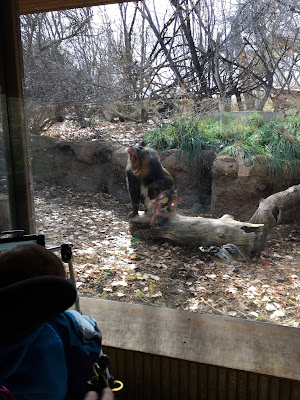 After the zoo, we went home to get ready for birthday and Halloween fun.  Max put on his lion tshirt and got out his Batman cape, since he wanted to be "Lion Batman" for Halloween.  He wanted to hand out candy, and scare the little kids...always his favorite.  He will laugh when they scream.  This year a lot of neighbors brought trick-or-treating to him since he can't take the steps up to their houses.  He is set with stickers, and trinkets for a year!

Max was all about ghosts this year as his creatures.  He didn't want to set out any of his zombies from this year, so Daddy hid them out of his sight for the older trick or treaters to see. 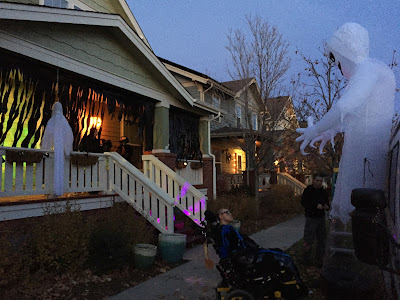 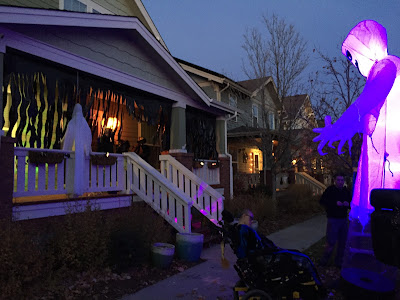 This was his favorite this year.  He wanted it on top of his van, but the wind was so strong we had to tie him down on the ground. 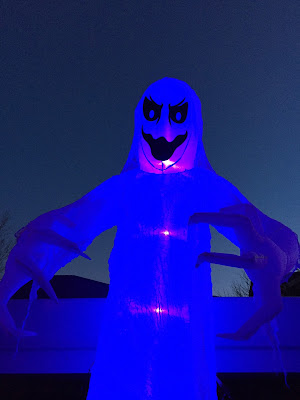 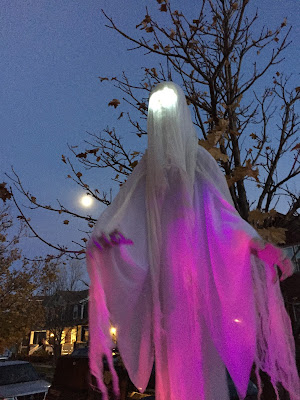 After we got the decorations on, I took Max for a quick walk around to see kids out and to see some decorations before it got dark.  Then we made a stop back inside to have dinner and for Max to try out his birthday gift from us. He and his dad have been rocking every night for months, and the little blue chair that rocked my baby was no longer able to hold them both.  We went to the La-Z-Boy store and sat in all the big man rockers they had and found this one for him. He got it last night and wanted to rock and rock and rock! My feet don't touch the floor when I sit in it!  But Max L-O-V-E-S it!!! 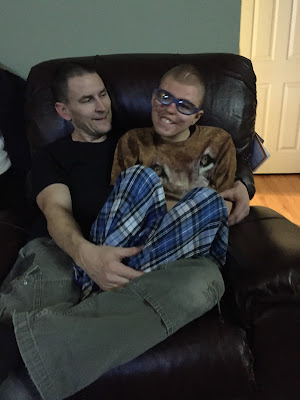 When the trick or treaters started coming more frequently, we took Max out to the porch to get to scare the kids with all his spooky creatures.


His spider was down in the bushes to scare all the moms and dads.  The kids remember it's there every year!

We really didn't have too many trick or treaters. It was a cold, windy school night, and there was a lost little Batman and a hurt teen in our neighborhood, so I think everything just ended earlier than some years.  We were packed up and in the house by 8:00.

Just in time for a birthday cupcake for the guy.  We sang him Happy Birthday To You and told him to blow out his candle.  He took a deep breath in and let it out...and of course it was just enough to blow out that candle.  (He may have had a little help.) 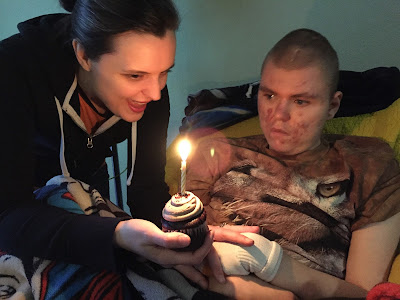 Happy 14th Birthday, Max.  We love the boy you are, and we hope this year is one of your best.
Posted by Deana at 6:48 PM