I slept through two alarms this morning.  I woke up later than I had wanted and skipped the slow wake-up looking through my social media sights to quickly get in the shower and get around.

The hot water washes away aches in my back and a few tears wash the sleep from eyes...just a few no need to get all worked up so early in the day.  I'm not sad, I tell myself...I'm just so tired.  I think I must have slept through my alarms because it's the first night in many that I felt like I truly slept. And I could have kept sleeping, but duty calls just like every morning.

I step out of the shower to be greeted by our geriatric dog, Olive, who needs out.  She persistently whines and whimpers until I throw my robe on and run her upstairs to avoid a mess on the floor.  I let her out and see that it's raining.  Rain.  Glorious cool rain....a very welcome sight in these too hot, too long, too summery summer days.

Olive stares at me from the screen door. She's not going to do anything in the rain, so I let her back in and go back downstairs to continue getting ready.  I get dressed and start the morning bargaining with myself.  What do I have time for? I can probably get in some breakfast, or I can do a workout, but not both.  I decide on a fast and hard workout and will have a late breakfast, maybe eggs for lunch.

I check on a still sleeping Max before clipping into the stationary bike and take a scenic ride through Santiago, Chile.  I go to a different location on each ride.  I can't stand the hyper classes yet.  I would rather daydream of traveling to far off places - another life for fifteen minutes.

As I get to the last minute and a half of the climb I hear the familiar sounds of Max waking. I turn up the resistance and push as hard as I can pretending I'm racing to get to him at the top of the mountain. The video ends at a statue of Jesus with people all around.  Maybe I would like to see that in person one day.

I come upstairs to find a happy and sleepy Max.  He's worked his way down in his bed and kicked off all his covers.  His room is a cool 62 degrees.  He won't sleep in anything warmer than 62 degrees, and he's chilly.

I notice he has a diaper to change and get him changed then pick him up to check his skin all over to make sure there are no spots to watch.  When he sleeps especially hard like he did last night, he can get areas that are tender.  Everything looks good, other than the painful areas of acne that has started to cover his back, chest and face in the past year.  It's something I can't figure out and wish he wasn't having to experience because it's so painful for him.

After his skin check and a few stretches, he's made another diaper for me so I change it.  I rip off one of the tabs as I'm trying to close it, so start all over with another diaper.  Three diapers in five minutes.   I tell Max I am going to go get his medicine made and then get him up.  I tuck him in and lower his mechanical bed and put up the padded sides so he's safe.

I let the dogs out again and let them back in quickly because it's still raining and they don't like it.  I stop to look at my neglected garden and think how nice it would be to enjoy a cup of tea out there in the rain. I must have been standing at the door long enough for the dogs to want back out, so I let them out and shut the door.

I make Max's medicine and get his recliner ready for him - it's more than a chair really, it's a throne fit for a king. I get a text from Steve telling me he has good news, he doesn't have to travel this week.  I feel a wave of relief because I won't have to be alone at the end of the week.  The dogs are scratching at the door and I let them in and immediately notice the muddy paw marks on the floor to be cleaned up later.

I hang Max's food and get it primed, then move the overhead lift into his room.  I tell him his lift was like a speeding rocket. I reminded him that was a simile, since that's something he's working on with his speech therapist.  He smiled and I asked if he was a speeding rocket, or was he a bird flying through the air high above the trees? He said he was a bird and I told him I would have to check, I think that is personification, but my teacher momma mind is still on summer vacation.

I get him settled into his chair and notice he has another diaper that needs changed.  I wonder why he is having so many diapers so early in the day and remember he had extra fluids overnight to kick the little cold he's had.  Once he's comfortable I give his medicine and hook his feeding tube into his g-tube button to start feeding him.  I apply his deodorant and pull the Batman shirt he chose to wear over his head then cover his legs with one of his favorite fuzzy blankets.

It's time to wash his face with the medicated soaps and creams that are supposed to ease the painful spots that remind me daily that my sweet babyfaced boy is turning into a man, still stuck in a baby's body.  He only fights me a little bit while I clean, tone, and moisturize with the magic potions and is starting to doze off again by the time I open the blinds to show him it's raining.

I turn on his music - Simon and Garfunkel's 'The Sound of Silence' fills the quiet room fitting the mood of the sky outside and I turn on the tea kettle.  I answer a text from his speech therapist checking to see if Max is feeling up to therapy later today and pour myself a cup of tea.

I take the teabag out of my mug and sit down to answer emails and sort through the stack of papers calling for attention in front of me. I look over at Max who is shifting and kicking in his chair.  I get up to reposition him and notice he has another diaper to change.  I change him and get him comfortable again before sitting down to my cup of tea.

I look at the clock, it's been an hour and a half since I opened my eyes.  It's just another day. 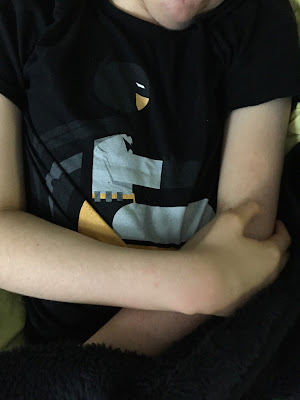