Max has been working hard at getting his ideas across in art therapy lately.  Yesterday he was frustrated with no being able to express himself exactly like he wanted to, but he stuck it out and was able to get his thoughts across so he could make exactly what he wanted, a t-shirt for his Aunty Angie.

Once he was able to tell us he wanted to make her a t-shirt, he had to make sure we knew what he wanted to put on the shirt.  He spelled out G-E-R-A-F-D, giraffe! Which just happens to be her favorite animal. 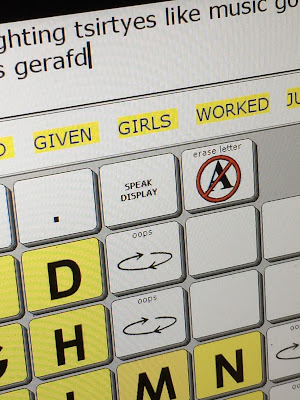 He got to work and chose his colors, said it needed two giraffes and a heart, and then it was all done.

He was so proud of himself once he finished it that he wanted to go right away and give it to her.  So, once Daddy got home from work, we loaded up and took it to her to surprise her.

He's such a thoughtful guy.  I wish it wasn't so much work for him to get those thoughts across, but we love it when he's able to.