Today was Max's last day of 7th grade.  He's had a good year, mostly because he's decided to be such a rockstar with his talker.  He has shown a level of intelligence this year that we had no idea was inside of him.  Maybe we knew, but we didn't know how to get it out.  And he waited patiently until we figured it out with him.  At the beginning of 7th grade, he was just learning the new placement of his switches and hadn't started the medicine to bring in his focus yet.  His moods were all over the place and he hadn't yet started talking about his feelings to let us know why he was getting so upset. It's been a big year for him. While the first day of 7th grade started with smiles and excitement.  The last day of 7th grade ended abruptly in tears because of a terrible headache Max had.

As soon as I got him in his chair he started crying and trying to get out.  Thankfully, Robby made him a headache page so he could tell me what was bothering him.  He wanted me to turn off the lights, take off his glasses and get him to his dark cold room.  I asked him if he could finish school first and he said no. 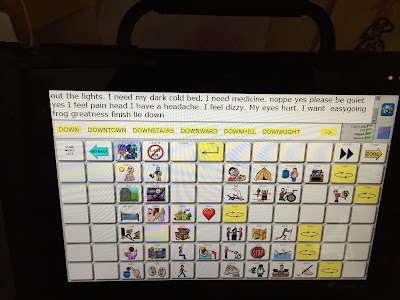 We had his teacher open her end of school gift from him and then he was off to bed, where he still is listening to his quiet music in the cold and dark.  He will get to have extended school year (summer school) starting in a few weeks, and hopefully less headaches by then.  But for now, some relaxation for this big guy.  Fare thee well, 7th grade!

Congrats on finishing another successful school year, Max! I sure do hope that headache goes away quickly.