In speech therapy today, Max got to listen to Robby's Beatles records.  They are working on figurative speech and this encouraged Max to work on similes.  Robby let him choose the songs, and then asked him to come up with some similes about the songs.

We know this is his all time favorite Beatles tune, and as soon as it started playing he said "awesome, good." He goes on to describe it.
Eleanor Rigby
Old Woman
Smooth as the other fog that aelinor

We asked if Eleanor was as smooth as the fog, and he said yes.  Give the song a listen and tell me he doesn't get it dead on with that description.  It plays like a thick fog rolling in. 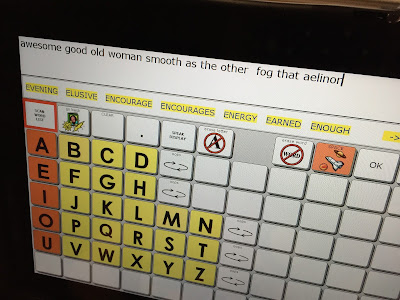 DJ Max next requested Blackbird, multiple times while Robby got the record to play.  It's not as fast as hitting play on his iPad! When he typed "blackird want like " - he was asking for Blackbird to be put on. 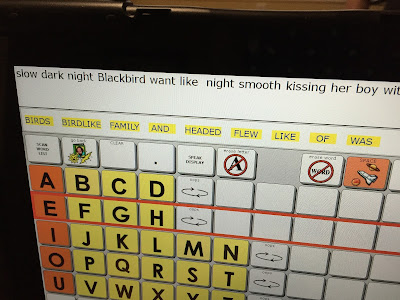 Blackbird is a such a special song.  When he was a baby, we were visiting with his Dr. L. and he played him Blackbird on his guitar.  I had never thought the words so deeply until then.  It became his fight song in the darkest times of his earliest days.  "Take these broken wings and learn to fly.  All your life you were only waiting for this moment to arise."

I don't know who the "her" is Max was talking about, but the boy is him.  He is always the boy in his stories.
Maybe the night is kissing him.  Maybe Blackbird is kissing him.  Maybe he remembers being rocked to this song, with kisses of hope for better days where he would be free. Whichever it may be, his words struck me as some of the most poetic words I've heard from him.

After Blackbird, they listened to Robby's favorite song, Rocky Raccoon. I can't find an original of Rocky Raccoon by The Beatles on Youtube, so Max told me I could share this one from his favorite guy, Jack, singing it. 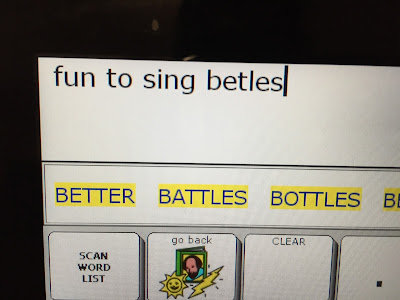 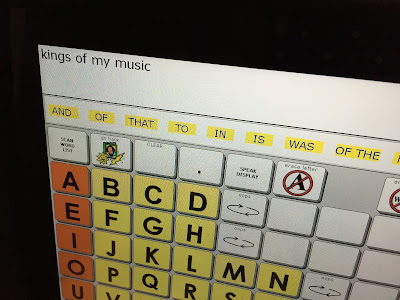 Kings of my music

I think Max and Robby may have found their favorite way to bond.  They both could spend hours for weeks and months ahead listening to The Beatles music together.  And I so look forward to hearing what he has to say about their music.
Posted by Deana at 5:54 PM