Yesterday in music, Max had a headache coming on and didn't much feel like loud music. We hooked up his computer and he asked Ms. Laura to play the guitar. He said he wanted to listen to music, The Beatles.  His final request came by him spelling I-M-A-G-I-N-E.

She asked if he was wanting Imagine by John Lennon and he said yes. 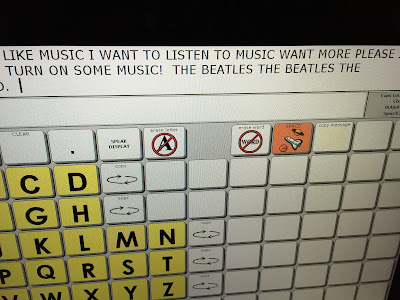 She quickly found the chords and started playing and singing it for him.  She played it through a few times and during one of the times she was just playing the guitar - not singing - he was singing along. Then I see him start to build a sentence on his computer and saw he was singing one of the lines.

Wow. Just wow. I am always so impressed with not only Max's tenacity in expressing himself but in his choices! That guy has incredible taste!

He has the very best heart.