It's late spring, so we're gearing up for all of Max's follow-up appointments at the hospital.  Last week he saw Endocrinology and Neurology.  Next week he has more appointments and more peppered throughout the rest of the summer.

These first two appointments were pretty uneventful, just a few changes to medicine doses and checking up on how he's been doing. And of course a height and weight.  He's 5'2" and 89 pounds. His doctor said he's probably close to done growing height wise, but may still fluctuate on weight. The real story to share is how Max interacted with his doctors this time.

Max has been going to doctors appointments his entire life.  In the early days he was going multiple times a month to see all the specialists who follow him.  As he's gotten older, the visits are not as frequent. That said, Max still knows who all his doctors are and will tell us to contact them if something is bothering him.

He's been letting us know some things that have been bothering him lately so we had a list of things to bring up with his doctors. We took his computer with us so he could chat with the doctors if he wanted to during his appointments.

For the visit with his Endocrinologist, she had barely walked in the door before he started in on telling her just what was bothering him. I blurred out some of what he said for his privacy, but he gave her an earful of ailments. 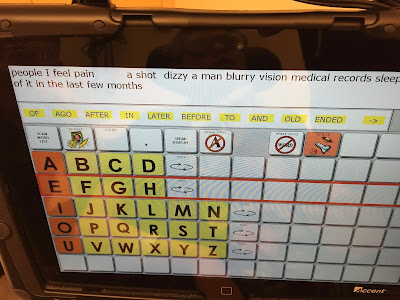 He told her where he was having pain because of his testosterone shot. And that it caused him to be dizzy and have burry vision. That gave us something to talk about with both his neurologist, and will bring it up with his eye doctor too, since he has never told us either of those things. We were going over his sleep journal and he said 'medical records sleep', then told her 'fear of it the last few months'. We didn't ever get to the bottom of if it was sleep he was afraid of or his shot. He talked to his doctor for 15 straight minutes. She was so interested in what he had to say and hung on his every word. In the end, she told him she would do everything she could to help him feel better after he gets his shot, and she was so sorry it was making him feel so badly.  And she thanked him for telling her what was bothering him so she could better help take care of him.

Later in the week, Max got to see his Dr. L.  for the first time in a year. When we got to the appointment, Max was MAD! In fact, he told us he was furious, angry, hot and frustrated.  When the nurse came in before the doctor Max was not having it.  He said 'no. want doctor L.'!  She went and got him and before he could sit down at his desk, Max started telling him what was bothering him. He told him "my head hurts, dizzy,  I feel weird ask me questions so we can figure it out, okay?" Dr. L. loved that Max was talking with him and he asked him a lot of questions until they figured it out.  He thinks Max is having migraines, which would explain his wanting to be in his cold, dark, quiet room recently in the middle of the day.  He also told him when his head hurts it makes his stomach hurt, and he doesn't want to wear his glasses.  They talked it through and Dr. L. asked Max if he had a headache at that moment and Max told him no.  Then Max told him, "thank you."

When the appointment was done and we had a plan for the headaches, and some testing he wants done this summer, he told Max how proud he was of him and how much he loved talking with him. Max was proud too.


Both visits were great.  All of Max's doctors are always very caring and listen to our concerns, but this was the first visit where Max advocated for himself. He let his doctors know what was bothering him and once he knew they heard him and were going to try to help him his whole body relaxed. Being heard and understood is a very powerful thing.  It's something we can take for granted. I'm so proud of Max for working so hard to make sure his voice is heard.  And so happy he's able to show his doctors just how smart he is.

This is one of the best posts I have ever read. Being able to communicate and advocate for themselves will extend and improve quality of life. It is just SO big.