Max is starting a unit on Africa for summer classes.  Today in school he worked on the KWL (Know, Want to Know, Learned) for Africa.

He continues to amaze us with his knowledge on things we had no idea he knew about.

These are the things he KNOWS about Africa.  He told his teacher with his computer and she wrote it down for him. 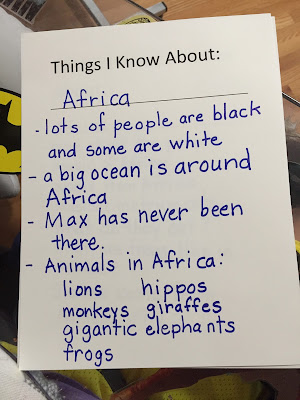 He typed "People black" we talked about how most have dark skin, but some have light skin like his.

He typed "a sea around"

He typed "I never been there."

Then he named all the animals he knew lived in Africa. "lions, hippos (spelled hepo), monkeys, giraffes, gigantic elephants, frogs)

The things he wanted to learn about were insightful too. 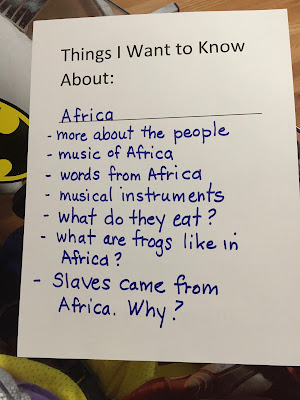 He typed "more about people"

He typed "eat tacos pizza". I told him I didn't think they eat tacos and pizza but we would have to find out.

He typed "slaves come from their. why?"

He typed "that I said ejioppt" I said that was a really great way to spell Egypt for the first time and helped him spell it the correct way.  That's when he said, "thank you." I remarked to his teacher what a stark difference it is when he's interested in learning about something.  He would hardly fill out a KWL on his last unit on seeds.  Today he knocked it out of the park.  He finished his KWL on Africa, colored a map of Africa and watched videos on African bullfrogs.  Once he finished the videos, he told his teacher he was done and it was time to play.  She told him he finished everything on the lesson plan so that was okay today.  He was SO happy and proud! 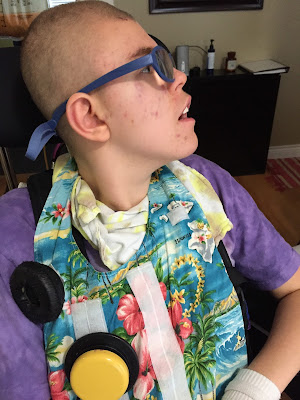 We can't wait to see what all he will learn and teach us this summer.  He's such a smart guy.
Posted by Deana at 5:22 PM