Max continued on with The Frog in His Bed story today as soon as his teacher arrived.

After his last story, Aunty Angie wanted to know if the frog talked.  He said it was a secret and he would only tell her what the frog says.  So when he started talking about it again today, we tried to get more info about the frogs in the bed.  He said "frogs live in my bed
frog questions about the old woman" (he sometimes calls his teacher "the old woman" just to be sassy.) She was asking him questions about the frog, so he was saying she could ask the questions.

When he said "word play" he meant he was playing around, just kidding.

I asked him if he was calling his teacher "the old woman" and he said "if I said that I said that." Where did this sassy teenager come from? 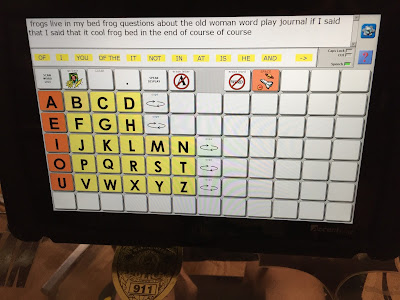 Mary asked Max what the frog sounds like when he talks.  He said "mean the spooky", and when we repeated that as a question, he answered "right." 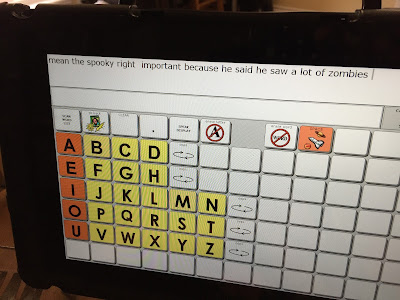 I had Steve take some video of his storytelling.  He told Mary there was more than one frog.  He also said "frog hopped into my mind."  He said they were imaginary, but not when he sleeps. Daddy asked if the frogs scare the zombies with their spooky voices and Max answered they make them be quiet.   I asked if the frogs were magical, and he answered, "yes, of course. I said that."

At the end of the video he says "them all over her bed" I told him no way there are zombies all over his bed! He was really trying to spook me with his story!

After Steve stopped the video he said "stop taking of me."  So we put the cameras away.  He just wanted us to listen to his story and stop documenting everything he said.

He finished up school and did some spelling outside to finish up his time.  Then it was time for speech therapy and he had to tell Robby all about the frog story, so I snuck the camera out again.
Once Max filled him in on the frog and zombies, Robby asked if there was more than one frog, and Max answered yes.  When he asked what their names were, Max answered "aardvark and duck." 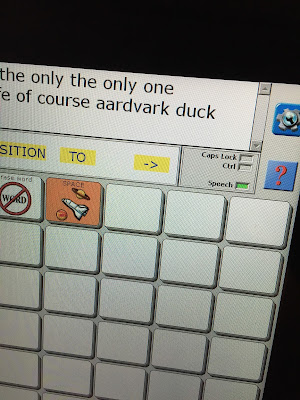 Max was asking Robby if he thought his story was boring and then told him it's cool.  And said again, frog was in my mind. 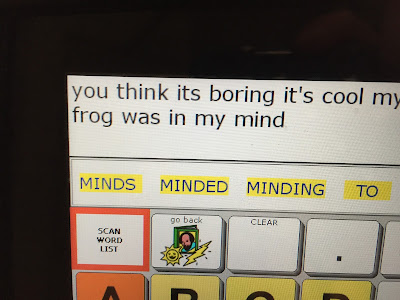 Then Max said "ugliest bed for the end" and I asked if this was the end of his story.  He said "of course" so the end of his story is "ugliest bed for the end boy eat zombies."  When Max is talking about himself he will often call himself boy or man.  He made his ending extra spooky by saying he eats the zombies.  But then clarified by saying, "only one." 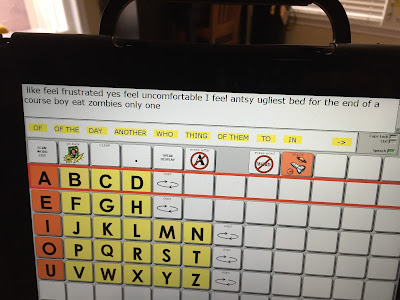 We all cracked up at this ending.  He really hung on it to get the laugh and make sure we all made a big deal out of how gross it is.  Then he finished the whole story off ... "joke." 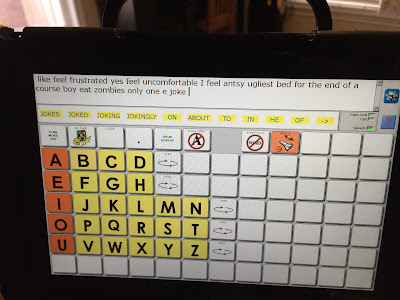 He told me to write it all down for you to read, so you'll have to let him know what you think of his story.

Thank you so much for sharing. Max is so creative and I loved the story! I hope to read more stories soon!

Your friend from Dallas,
Mahrukh Akhtar