Today in school, Max was in a story telling sort of mood.  His teacher was going over the people who were here for his IEP meeting the other day because they forgot to introduce themselves to him, and he had asked Mary who they were.

After she went around the room from memory, he told her there was one she missed.

He said, "also frog in the house."

I said, "what? where was there a frog in the house?"

Steve said, "Are you even kidding me?!"

Max said, "not even kidding. of course."  (He spelled 'kidding' in his alphabet page.)

I said, "there is a frog in your chair?  I better go make sure it's not still there."

He answered, "a new home in the house."

I asked where it had moved to in the house. He answered, "bed."

I said "Oh no! Your nurses are going to be scared to find a frog in your bed!"

He said, "Only one fatty frog, forever safe from me."

I asked if he was the only one who could see it and he cracked up.  Then finished his story with "period."

It was the most creative imaginative story he's ever come up with.  Of course there wasn't a real frog in the house, but he was really trying to convince us otherwise.  "Not even kidding." 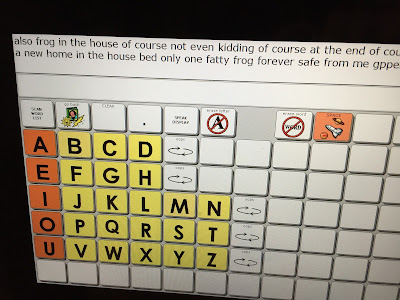