Last night at midnight, Max woke up and I got to give him a happy birthday hug and kiss before tucking him back into sleep.  It's still so hard to believe we have a teenage son! As I was looking at him all cuddled up, I remembered the night he was born 13 years ago.


As I reflect back on today, I am struck by just how relaxed it was.  It was one of the most relaxing birthdays we've ever had with Max.  I think that had a lot to do with I let him direct the entire day. He didn't want a big party.  He didn't want me to make a cake.  He didn't want to do therapies, or school. He just wanted to do what he wanted to do, and that's exactly what we did.

I let him wake up when he wanted, which was around 10:00am.  He ate his first food and watched a little bit of his Halloween cartoons before wanting to go chill out in his room and listen to spooky Halloween music before school (yes, it's a real station on Pandora, and yes, he loves it!).  When it was time to get ready for school, I asked him what he wanted to wear as a costume.  Much to my surprise, he chose Batman.  I truly thought he was starting to get over his obsession with Batman....I think maybe he'll always have love for Batman.

His teacher had activities for him to do, but he just wanted to play with his creatures.  Max has a lot of Halloween animated creatures and wanted to show them all off.  The only thing he said with his talker was he wanted to go play, go in his van.  So we cut school short and left in his van for the train station.  It was pretty warm today so we skipped any too warm places like the zoo or park.  He was happy to visit the train station and watch the trains coming and going, and of course people watching while we had lunch.

After lunch, we got his birthday dessert for him.  He wanted coffee ice cream from the ice cream shop at the train station.  Max just takes little tastes of food with his mouth so he doesn't choke.  So we just asked for a sample spoon of his ice cream and it was just right.


Of course, Max and Dad had to stop and get a coffee...because that's what the guys do when they're out.  We stopped and watched more people and cars go by before heading back home to get ready for Halloween! 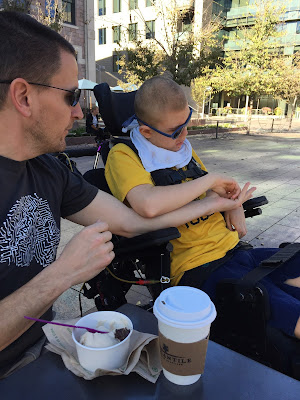 We do up Halloween big around here because it's a fun holiday for us all.  But this year, Max was very into it.  I'd say this was the most he's ever had input about what he wanted to do for Halloween - not just his birthday.  This year, he changed his costume selection three times.  The first choice was Man in the Yellow Hat.  Then he wanted to be scary.  Then he wanted to be Batman.  The only one we didn't do today was Man in the Yellow Hat (from Curious George).

When it was time for trick-or-treaters, he wanted to get scary and come out on the porch to help Momma and Daddy hand out candy --- and scare the kids!

From 6:00pm-8:00pm he sat outside and had lots of opportunity to scare people!  He actually got a few of them really good with his disgusting guts tshirt.

We couldn't believe he sat outside so content for two hours.  It was the first Halloween we didn't spend split between several things.  We were all together out on the porch handing out candy and enjoying the trick or treaters.  A whole gang of seventh graders came at one point and wished him Happy Birthday one by one.  They all have grown up with him, and while they all are getting older and figuring out their own new teenage experience, they are genuinely some of the kindest kids.  He was so happy to have them wish him a Happy Birthday, and of course this old witch may have shed a few tears behind her mask.  We had neighbors walk over to say hello and wish him a happy birthday, and lots of kids loved his costume and his creatures.  And just when he was ready to go inside, his nurse arrived.  He put on his scariest zombie call and scared the jeepers out of her.  Really it was his animated spider that jumped out at her from the leaves, but it got a scream all the same and made his night complete!

I'd say in all it was a great day. So great, I forgot to give him his present!  We'll get to that in the morning!  I think he's showing me life can be a little more laid back now that he's a teenager.

Wow. I can't believe your guy is thirteen! Just wow and happy, happy birthday to him and happing birthing day to you. Your perfect baby.