Before he turns 13 on Monday, I need to put a post here marking the end of the "kid" years.

This past month -- BIRTHDAY MONTH!! -- has been a fun one for Max.  He so enjoys October, and lets us all join in on his fun. He's changed costume ideas a few times, and I think he'll stick with his choice this time.  But, if he's anything like the rest of us in this house, he might change costumes a few times on his birthday.  He loves scaring his nurses and teacher.  He likes setting out something spooky each night to get his nurses.  But he also is sweet to them, and wanted to get them cupcakes with brain and eyeball frosting.

He's been using a new medicine this month for his involuntary movements, and we've seen increased focus and he seems to be less agitated when he's trying to focus on something.  Because he's not moving so much involuntarily, he's been able to use his talker with a lot more accuracy.  He chats up a storm with his teacher and therapists, but mostly with me when they're not here.

The other day as he and his speech therapist were talking about zombies, and the zombie crawl Max loves but missed this year, he had a great idea.  Robby was showing him pictures of all the disgusting fake blood he used to dress up like a zombie, and Max said "Mom, I want eat drink".  I told him no, only grown up Robbies can do that - it would taste too gross and he couldn't put it in his mouth.  Not to be deterred, he got right into offering a solution. "Mom, I eat cold chili" -- "NO!  That's so gross, Max!"  To which he cracked a grin and laughed.

He also has been very much into being "a man" lately.  He and Daddy are men, and they do men things.  When I forgot to put his lift sling under him in his wheelchair the other day, I was trying to explain to him I would need his help to hold still so I could safely get him out of his chair.  He said "Nope, need my dad."  I told him I can do it, I just needed him to hold still and it would just take me a little longer than it does daddy.  He said "Nope, need a man."  So, he sat in his chair contently until his dad got home a bit later.

Now for the pictures of October.  Yellow leaves, pumpkins, cooler days, crunchy leaves, and lots of walks.  All his favorite things! 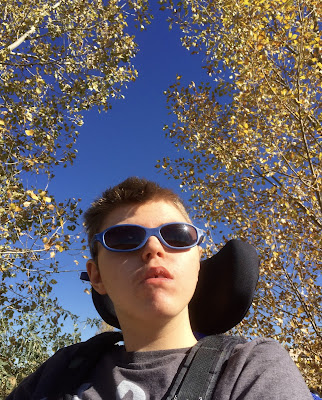 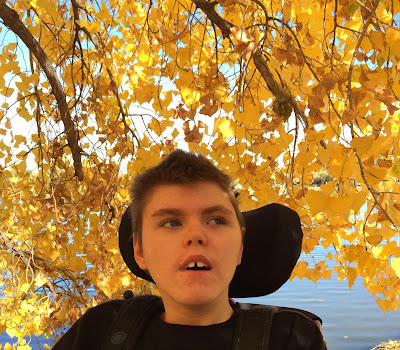 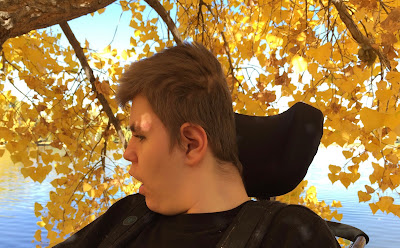 Colorado has plenty of yellow leaves to see in October! 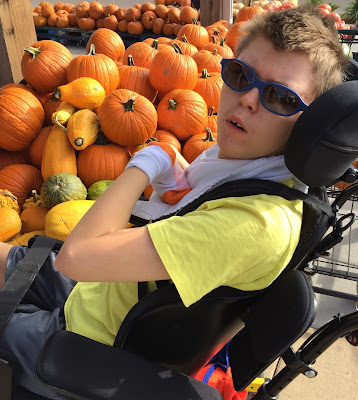 Max got to pick out his pumpkins this year. He chose bumpy ones. 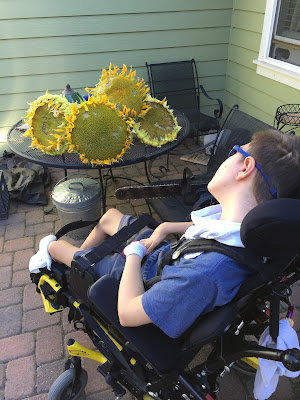 Max's sunflowers were HUGE this year! 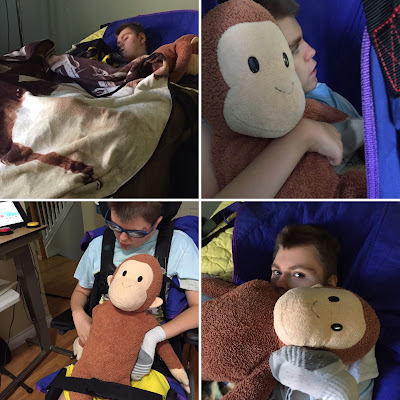 He still loves holding Curious George and wants him in his bed each night to go to sleep. 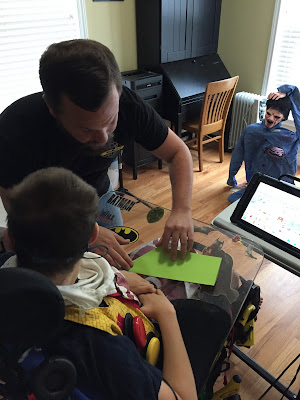 He and Robby do such fun activities.  Robby helped him make his first paper airplane.  Notice Max's zombie in the background. 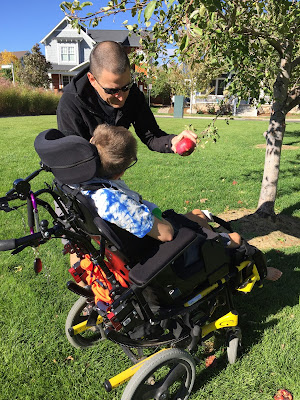 Max and Daddy went searching for apples in our neighborhood orchard.  We found one in the tree not already claimed by the birds and squirrels. 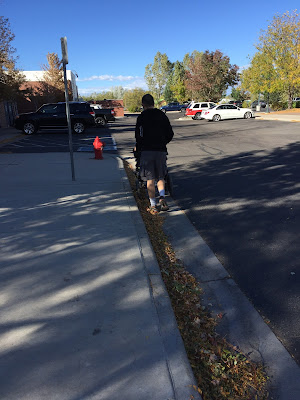 On our daily walks to the mailbox to see if sister has written, they take detours through ALL the leaves to make them crunch under his wheelchair wheels. 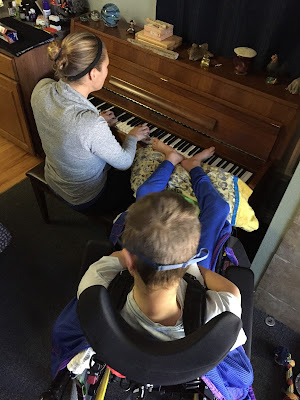 Music is still his #1 love.  His long legs finally reach up to the keyboard to play along with Laura. 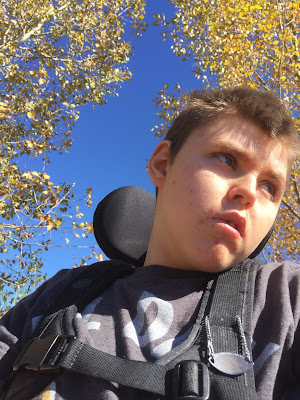 The open space behind our house is full of fall time treats.  Yellow leaves beside the ponds, and finally a FROG!! 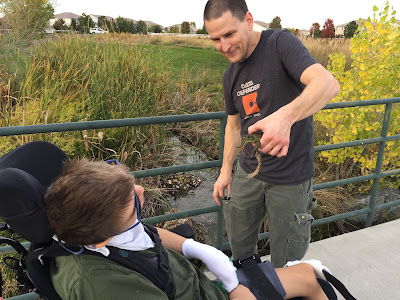 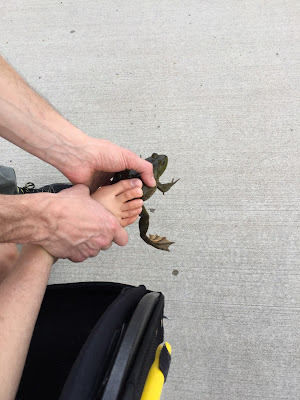 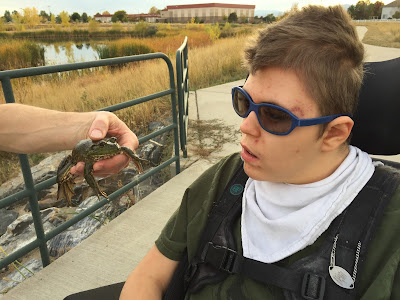 Momma spots them and Daddy tries to catch them for Max.  This one jumped out of his hand right after I took the picture...then I jumped a few feet back and screamed.  That may have been Max's favorite part about finding the frog. 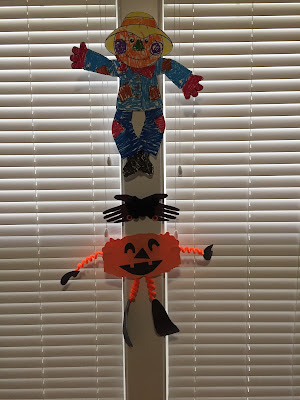 He has been working on "wh" questions in school, along with continents, and famous artists.  But, like always, his favorite part of school is making things.  Here are some of his Halloweeny crafts. 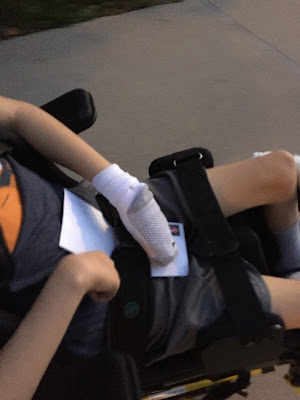 He's also been writing his sister while she's training.  Then we walk it over to the mail box and check to see if she's written back. They will get to talk on the phone soon, and I know they'll both be happy for that. 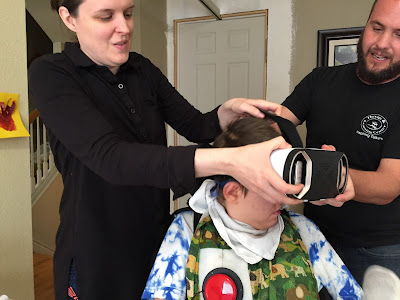 Robby tried out a virtual reality headset with Max.  Max HATED it!  Robby agreed to not try it again, but thanked Max for trying it out. 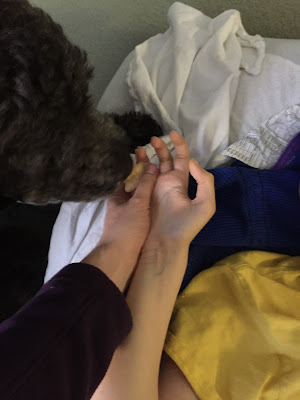 Max made dog treats in school for George and Olive.  This was a bat shaped treat. George hardly let me get the picture before he was taking it out of Max's hand and licking it clean. 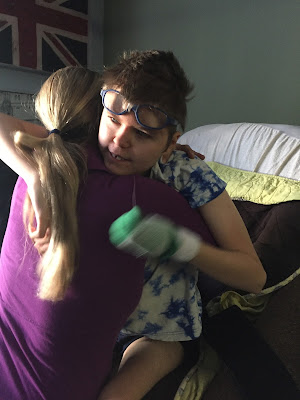 He loves to give hugs lately.  Here he is giving Ms. Laura a great big hug for singing to him Happy Birthday.  He does love her. 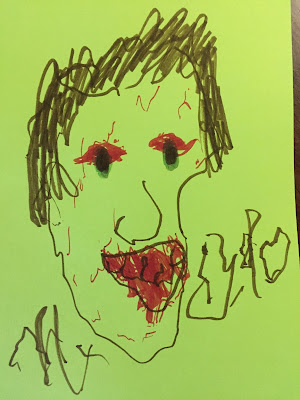 He wanted to draw his dad a scary zombie picture in school.  He drew this with me guiding his hand.  It's so much more steady now that he moves the marker around where he wants.
On the left, he wrote "MAX" and on the right "DAD" 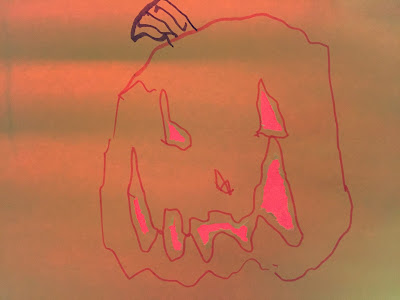 He wanted to make a scary pumpkin too.  He drew his pumpkin, then cut out the creepy eyes and teeth and pasted on top of orange paper. It glows up against the window. 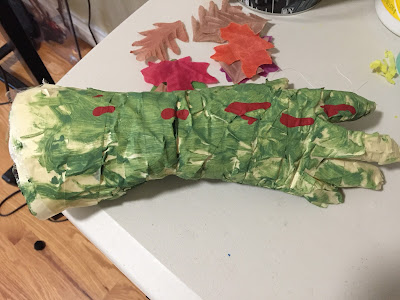 Max and Robby made a zombie hand, complete with blood drops.  Spooky! 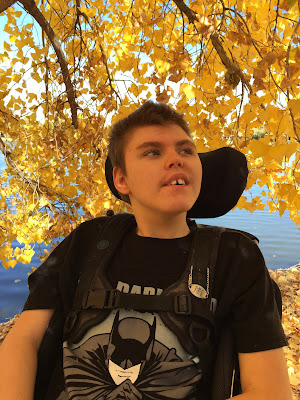 This is Max, at the end of his 12 years.  He's happy, and big, and strong.  He's challenging at times, and a joy to be around more often than not.  He knows what he likes, and knows what he doesn't like. He tries to sleep until noon if we let him. And wants to be in his room listening to music or playing movies at the end of school and therapy every day.   He tries to get away with one thing with me and another with his dad. If he doesn't get his way, he yells at us and throws a fit. He tells us jokes and likes testing his limits with a sly grin on his face.

I suppose we do have a teenager, after all.