We have been swept up in the back to school - winding down summer - ramping up of Santa's Little Hackers - finishing up doctors appointments - seeing daughter off to her next adventure end of August and start of September.   Hasn't everyone?

I wanted to take some time to mark on Max's blog who he is right now because it seems like he's changing and growing so much lately! He's a great mix of growing up and still loving the things he always has.  Except Sesame Street...he is completely over Sesame Street no matter how many times I tell him it's a fun show.

On his second day of school, he talked his teacher into quitting early in order to play outside.  She had a cool bubble machine he got to play with.  I don't think bubbles are something he can see but he was able to feel them popping on him and he loved being outside.  He wants to end every school time with being outside! 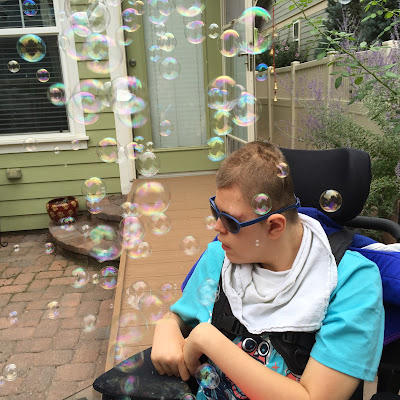 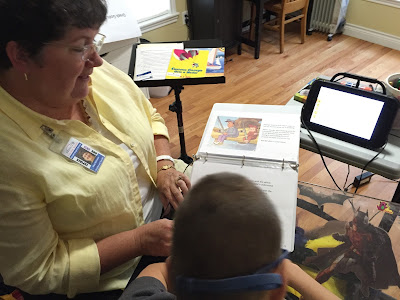 In school one day he had this to say about his beloved Nonni who passed away last year. I was headed to Oklahoma to see family and he wanted to go see Nonni. 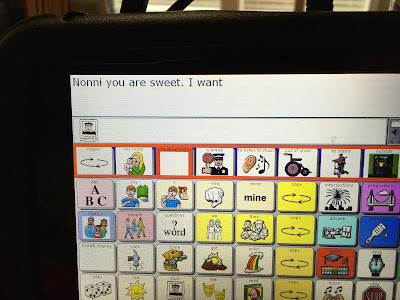 He's teaching his teacher how to play Go Fish -- which is, he says he's done playing when he's winning. 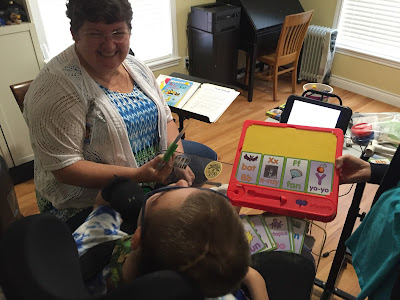 Max isn't into just one thing these days, as he has been in years past.  His interests are a variety of all the things he's loved.  Here he is with a few of his favorite things.  His Batman blanket, his Curious George pal, his cuddly Where The Wild Things Are pillow. 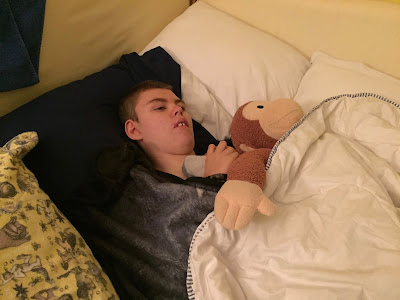 He likes surfing and calls himself a surfer, and all the same music, and has found Kung-fu Panda to be his latest movie favorite. He likes listening to audio books, especially the stories on storynory.com. I had to ask if he still likes Batman because he hasn't asked to watch it in a while. He told me he does, but I think it's just not his obsession.  He still answers to Officer Max, and likes the idea of being an Ocean Officer like big sis will be training to be.

On Labor Day, we met up with some of his classmates because our neighborhood was holding a fundraiser at the pool for Santa's Little Hackers. One of his classmates was working on an assignment for Scholastic News about people making a difference in the community, and chose to interview us.  It was interesting to see Max's interaction with his peers.  In the past, he's always been very excited to see them, and they with him. But this was the first interaction we got to see the teenage coolness from him and them.  Gone are the days of being little kids...they're definitely moving on into the aloofness of being teenagers. And for us that was just so interesting to see since it was so age appropriate. 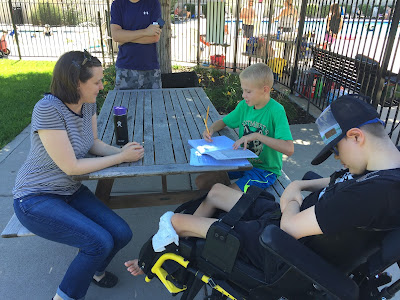 Max has been going on a lot more walks since the weather is cooler, and we're able to get him out more often. He had a rough few months with getting the right dose of testosterone and we're finally able to plan around his good and bad days. 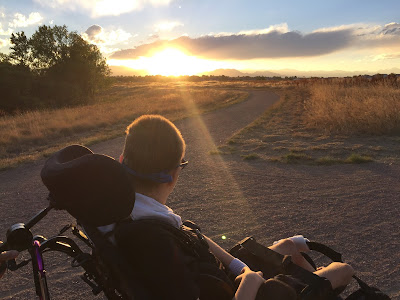 While he still loves turtles, he's added on bears and frogs to his animal lists.  He wanted to see a bear so badly on our drive to and from California.  And he and Daddy go on a frog hunt every day.  We've seen a few, but it's hard to catch them without getting in the water! 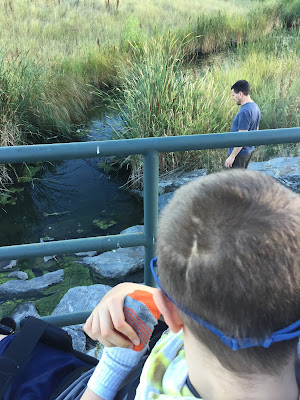 Max still has multiple therapies every week.  He has speech, music, PT, and art therapy each week. Here he is with Ms. Laura playing his keyboard his favorite way...with his head. He lays and composes songs for hours and when he's done, he rolls off. 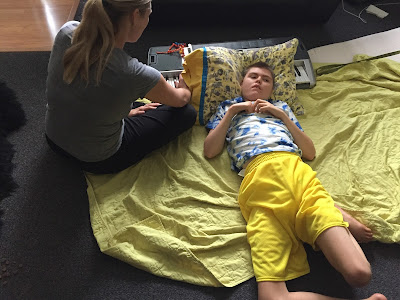 Last week he had his annual metabolic appointment.  He wanted to take his computer with him to talk to his doctor. 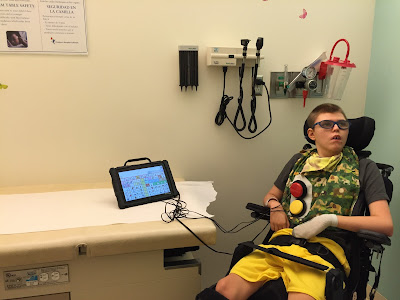 He was greeted by the doctor who first diagnosed him almost 13 years ago, by being called "Dr. Watson."  He thought that was funny, and gave him a smile and got down to work spelling in his ABC section of his talker.

He said "u" "understand", when we were explaining his health in the past year.  This is a question to make sure the listener knows what he's talking about. 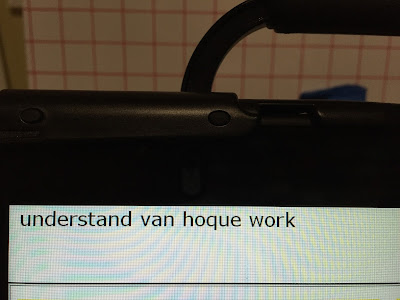 We discussed treatment, and research.  Since Max is still the one they're doing most of their clinical research on for his disease, CblX,  we were going over some options for treatment of a specific chemical that has been high in him. (Is that vague enough for you?  They are bit of hush hush about it, since it is research.)  When we talked about the new medicine, one of the side effects was serious stomach upset.  His doctor said he didn't want to try it in Max because of the side effect, but in talking it through with us they thought of another medicine that could work and decided to give it a go.  Max was quick to respond to that. 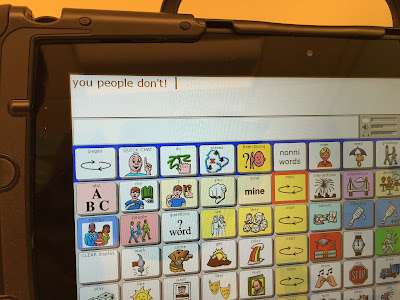 He was sure to tell us he didn't want it, but we all did.  I told him it isn't the one that would upset his stomach, but another medicine that Dr. V said wouldn't upset his stomach.  He finally agreed to it, but had one set of parting words for everyone before we left.  "My like come don't!" -- good thing he only has this appointment once a year. 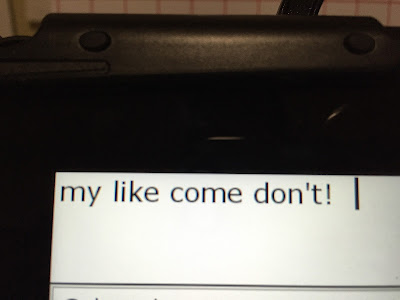 Max has been very much a pal of his dad lately.  I think since Steve has been traveling so much in the past year, they're both making up for lost time.  Max got a new shirt from 3eLove.com,  (we all did!) and wanted to match with dad.  That little heart in the middle is they how and why we vote. 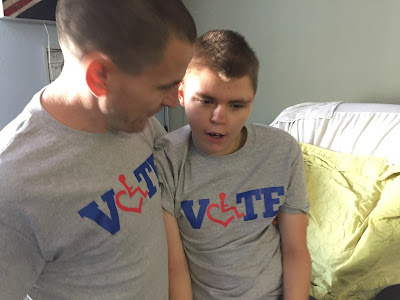 We took a little outing to one of his favorite places in Denver, to have lunch and watch the trains. Don't these guys look alike? They like watching officer shows and zombie shows together...just doing boy things. 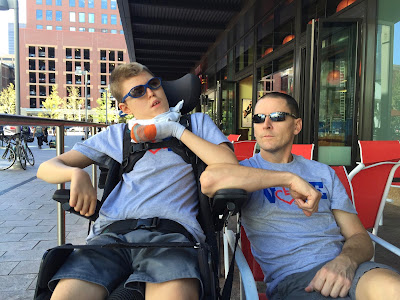 The trains depart every 15 minutes for the airport now, so he gets to see them every time we take him to the station.  The conductor drove by very slowly and waved to Max as they left the station. 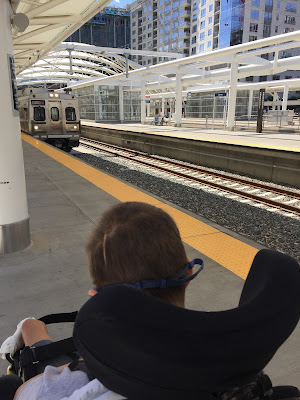 He's been helping me train for a half marathon walk I'm doing in memory of my mom soon.  Again, loving the cooler days and sunsets to walk by.  I have told myself that pushing uphill, in the heat, at altitude doubles the workout so is training me faster. 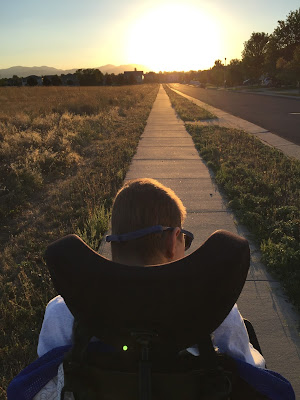 He has downtime a lot more lately, but that's got a lot to do with teenage hormones.  We'll take him to his room and he'll watch a movie, or listen to music or a story for about an hour then he's ready to come back out with us.  He allows cuddles every now and then,  even though he's a big man-cub now. 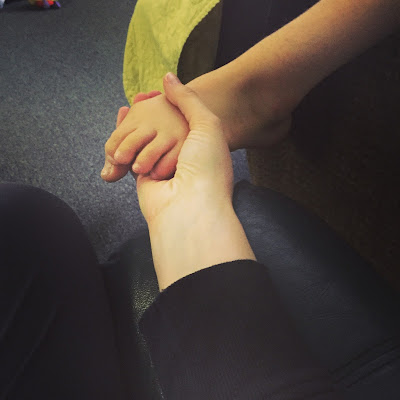 Hopefully I've been able to capture a bit of who he is these days.  He's such a mystery in so many areas that I wanted to stop and recognize all the unique things he lets us know about him.
Posted by Deana at 4:38 PM