As a 5th grade project, Max got to participate in the science fair at his school.  His classmates all worked in groups, but Max's group consisted of his teacher and mom.  His friends came to help out with his experiment, and he was able to put together a great science project.

He was supposed to learn about a body system.  Max chose digestion.  As part of learning about digestion, his teacher was reading him a book about edible insects.  I think I made enough disgusted sounds and faces for it to stick, because he was hooked at that point on making his science project about edible insects.

We found articles for him to read, and videos to watch.  As it turns out, insects really are quite nutritious and a good source of sustainable protein.....if you can just get over the ick factor.

These are some of the infographics Max used for his project. 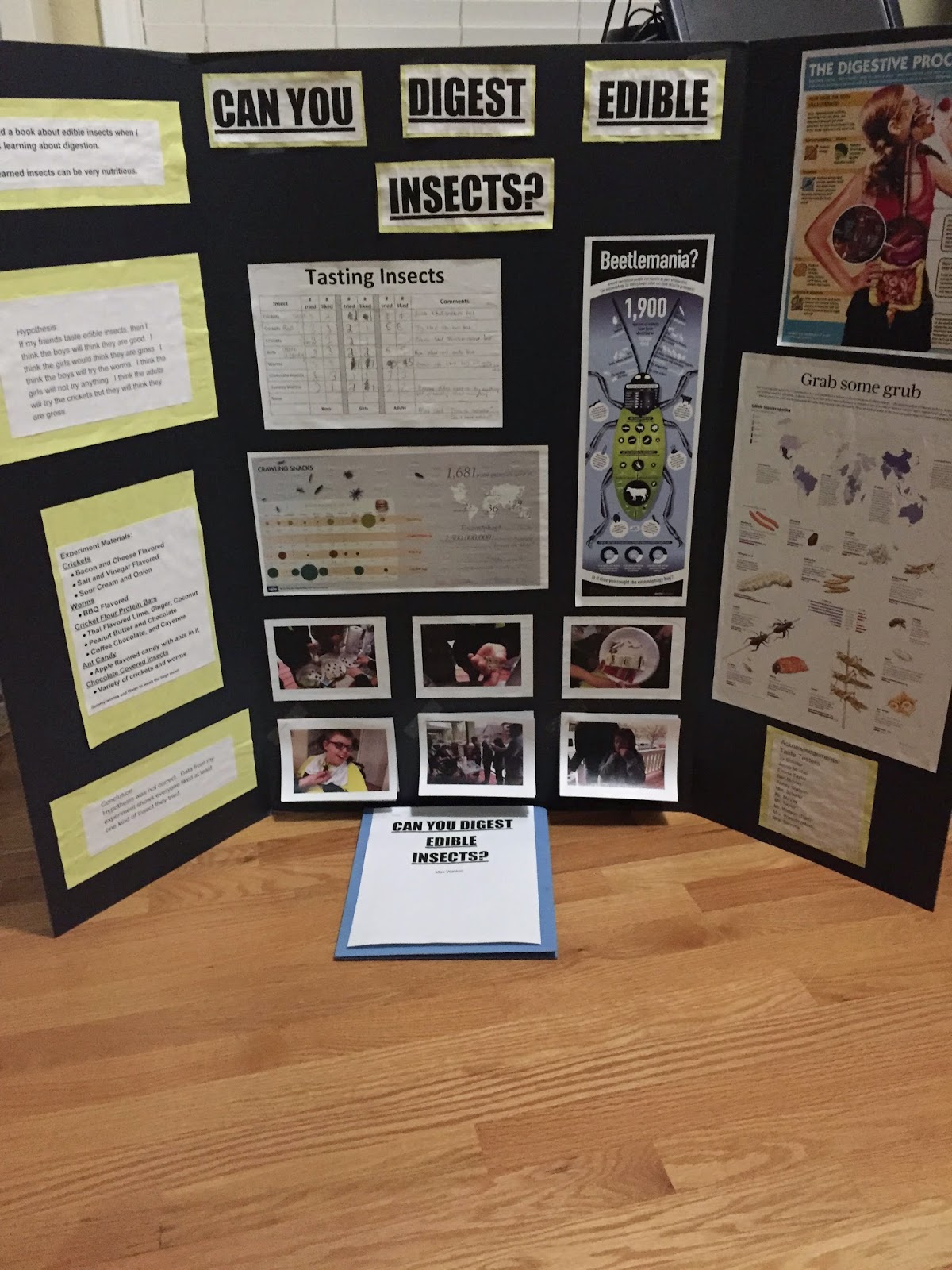 The taste test experiment was his favorite part of putting his project together.  We ordered edible insects from amazon.com.  We got crickets, worms, cricket flour bars, chocolate covered insects, and ant candy. 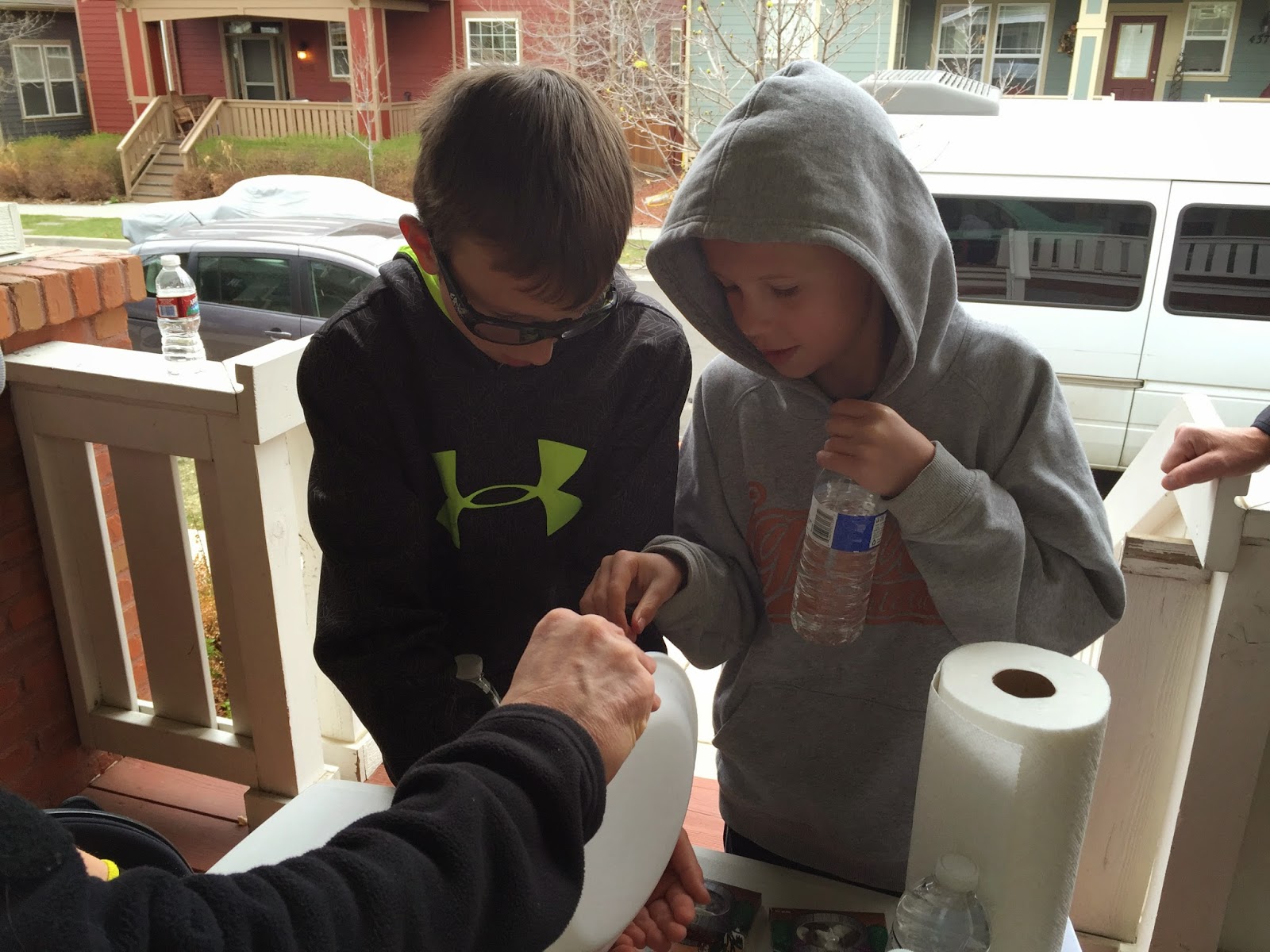 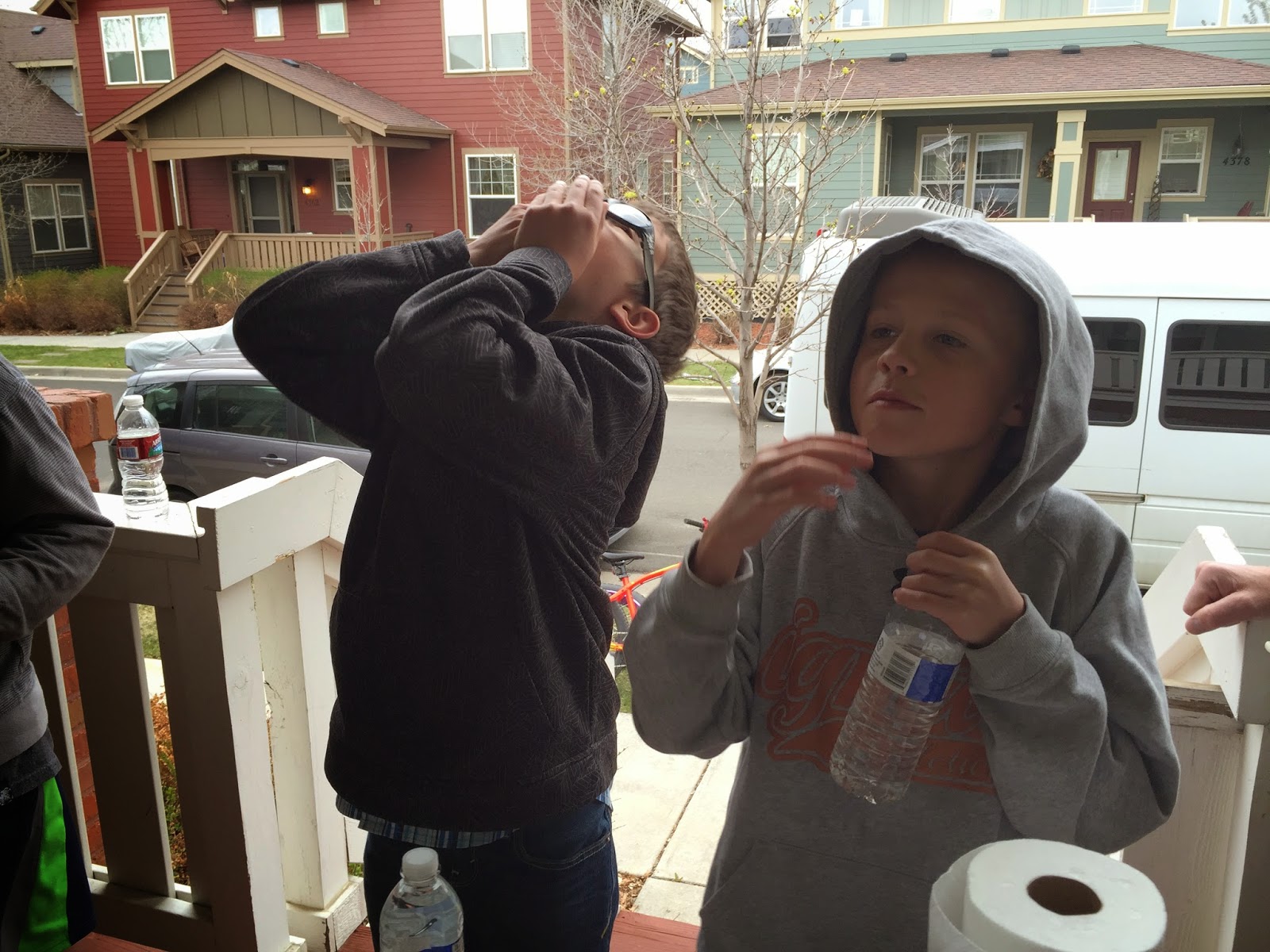 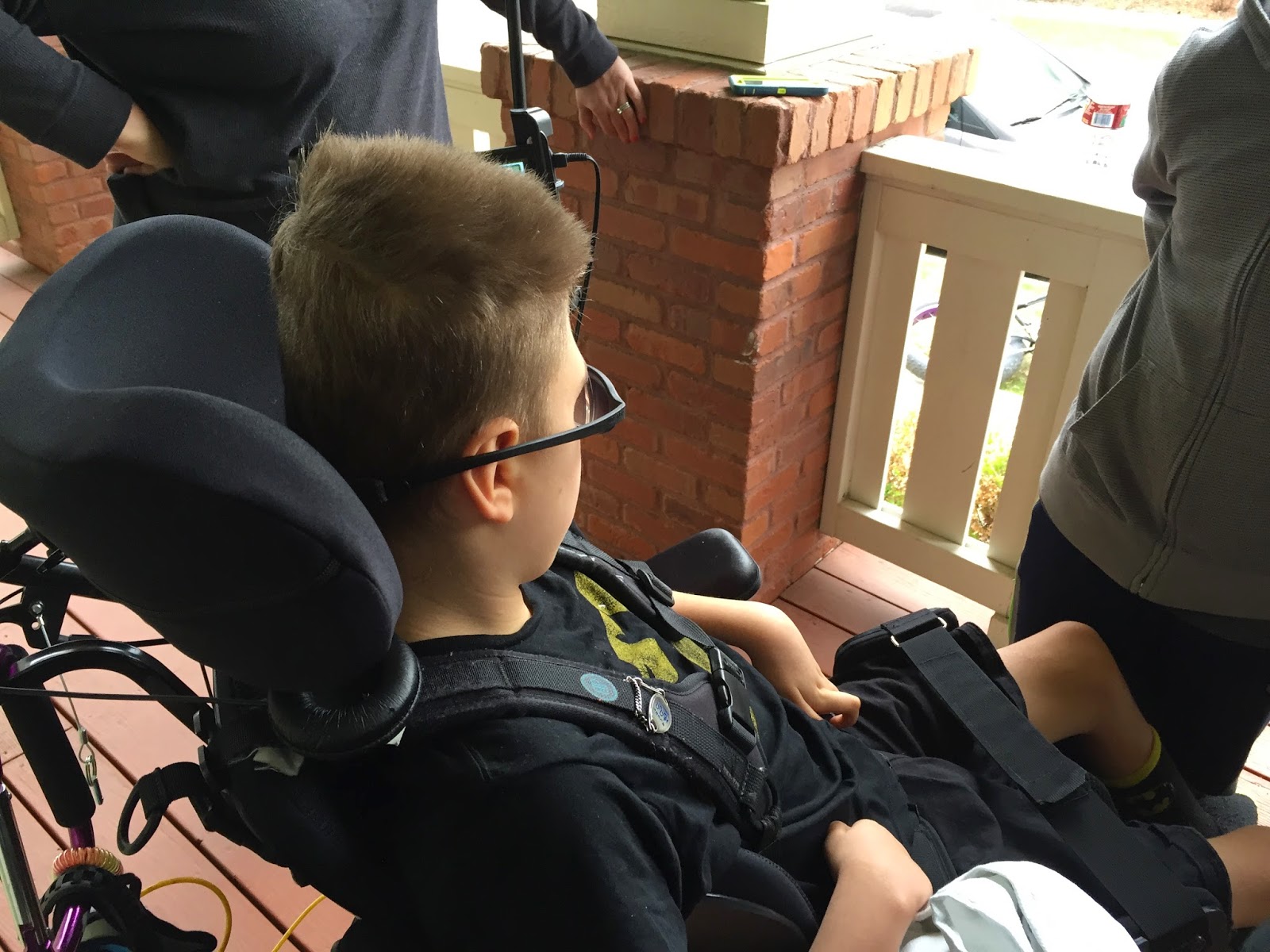 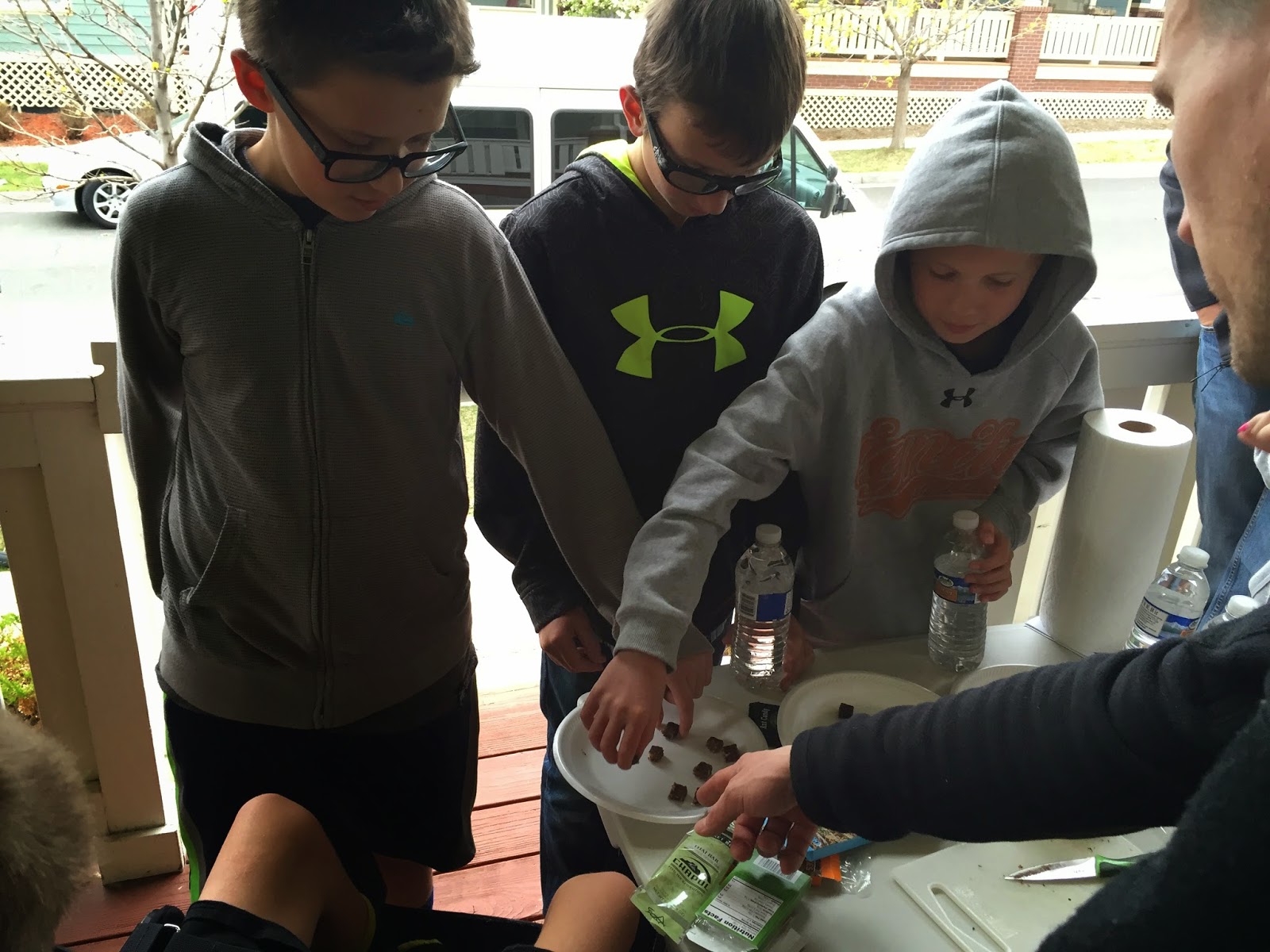 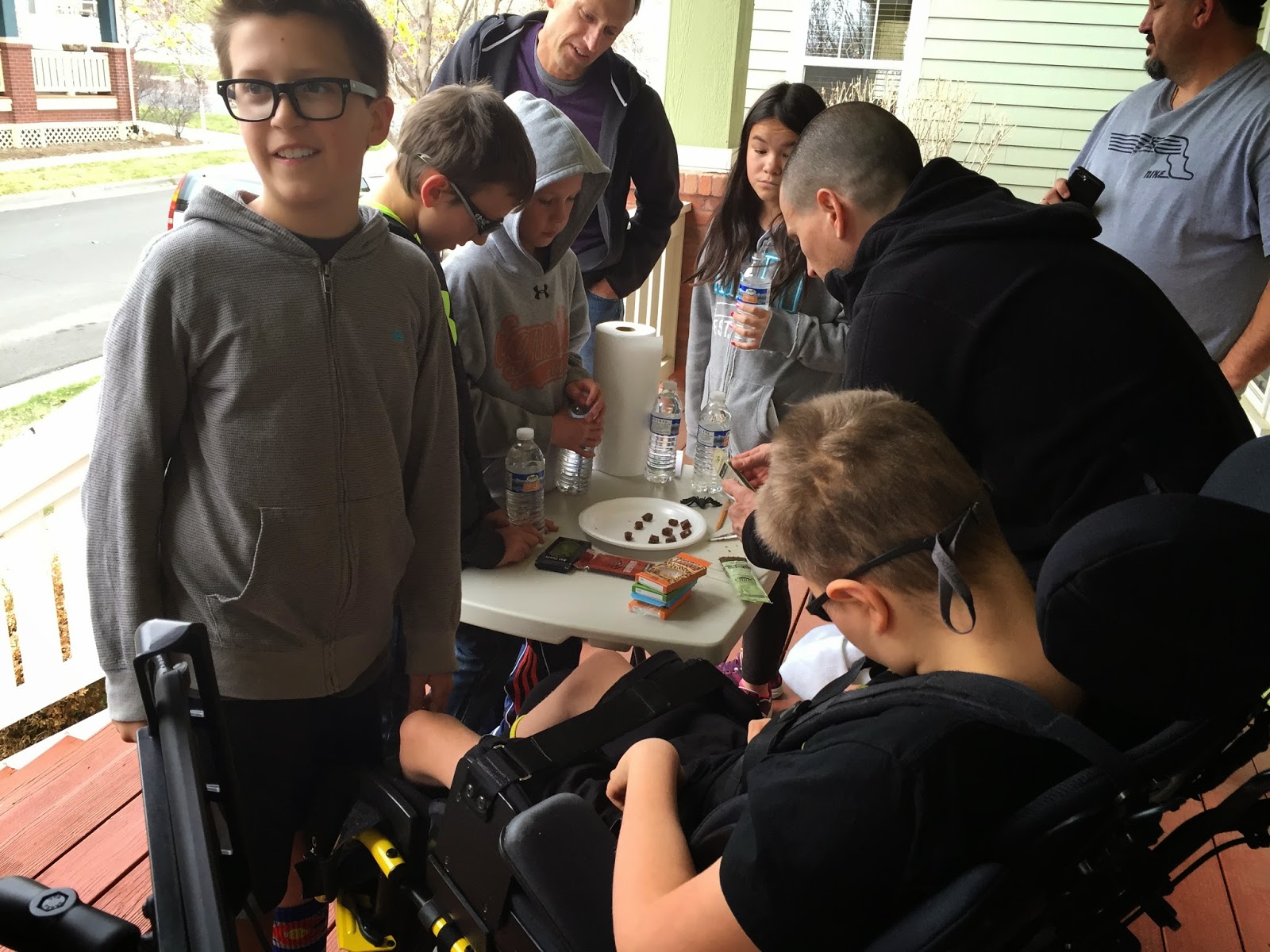 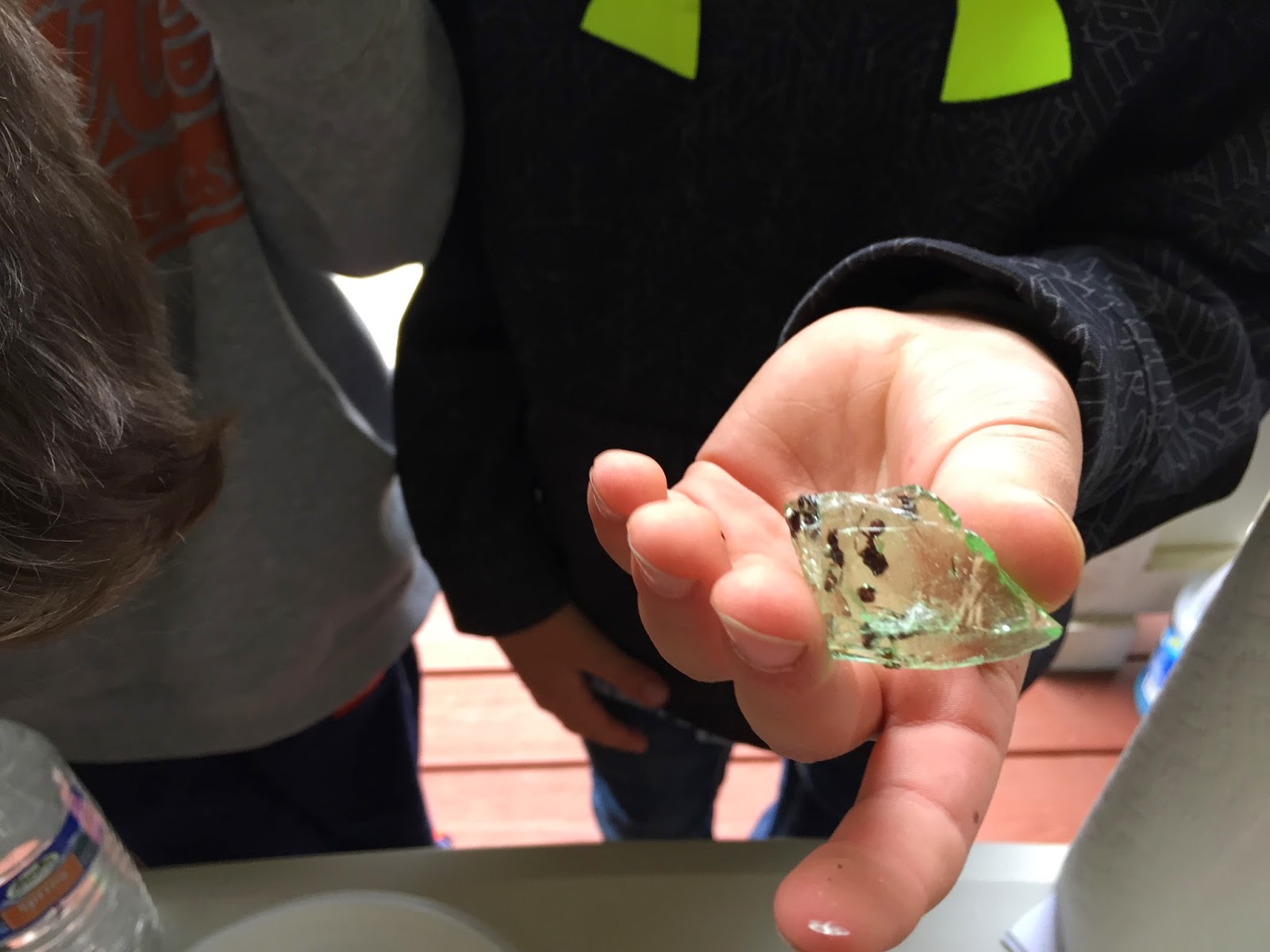 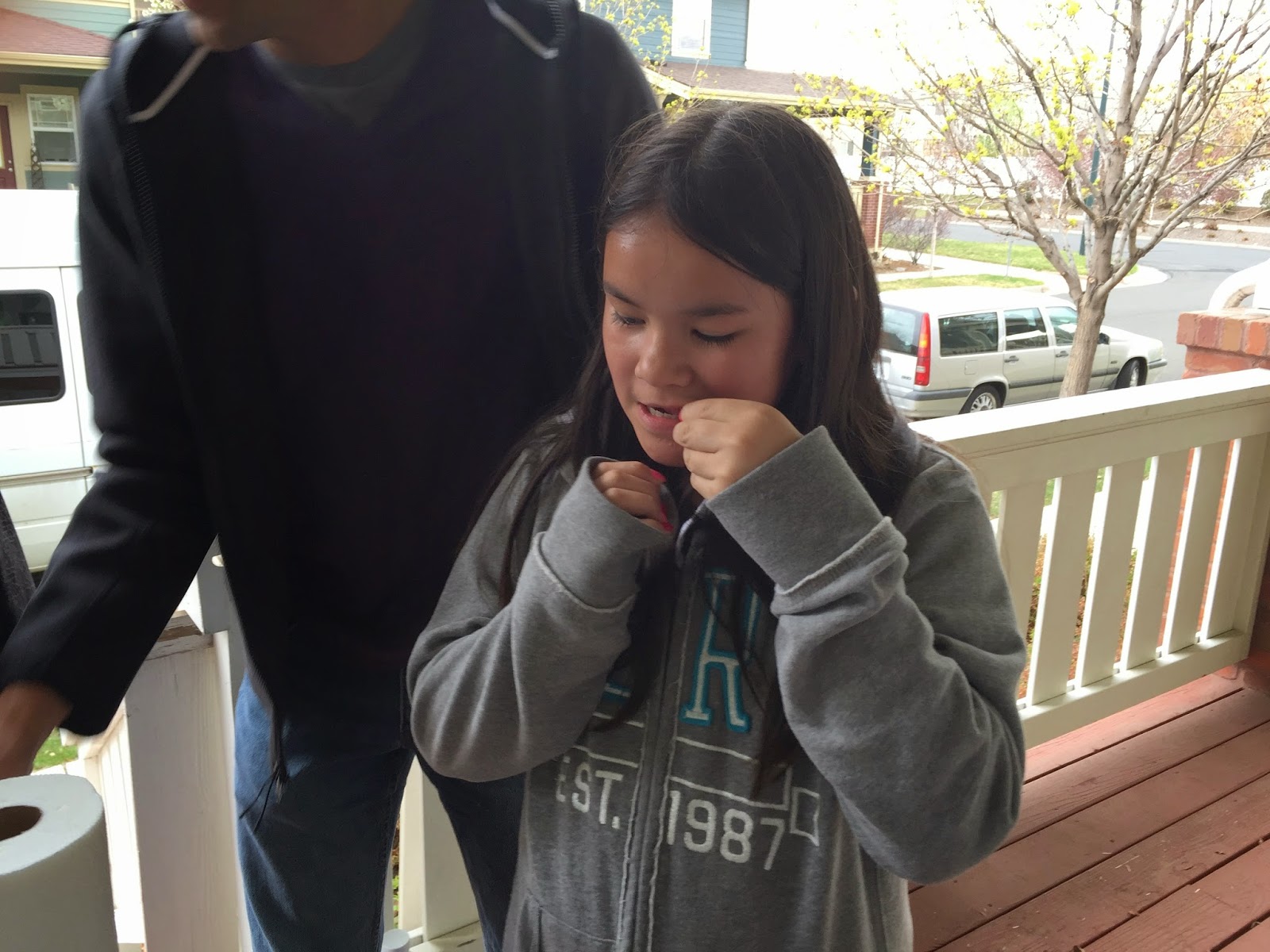 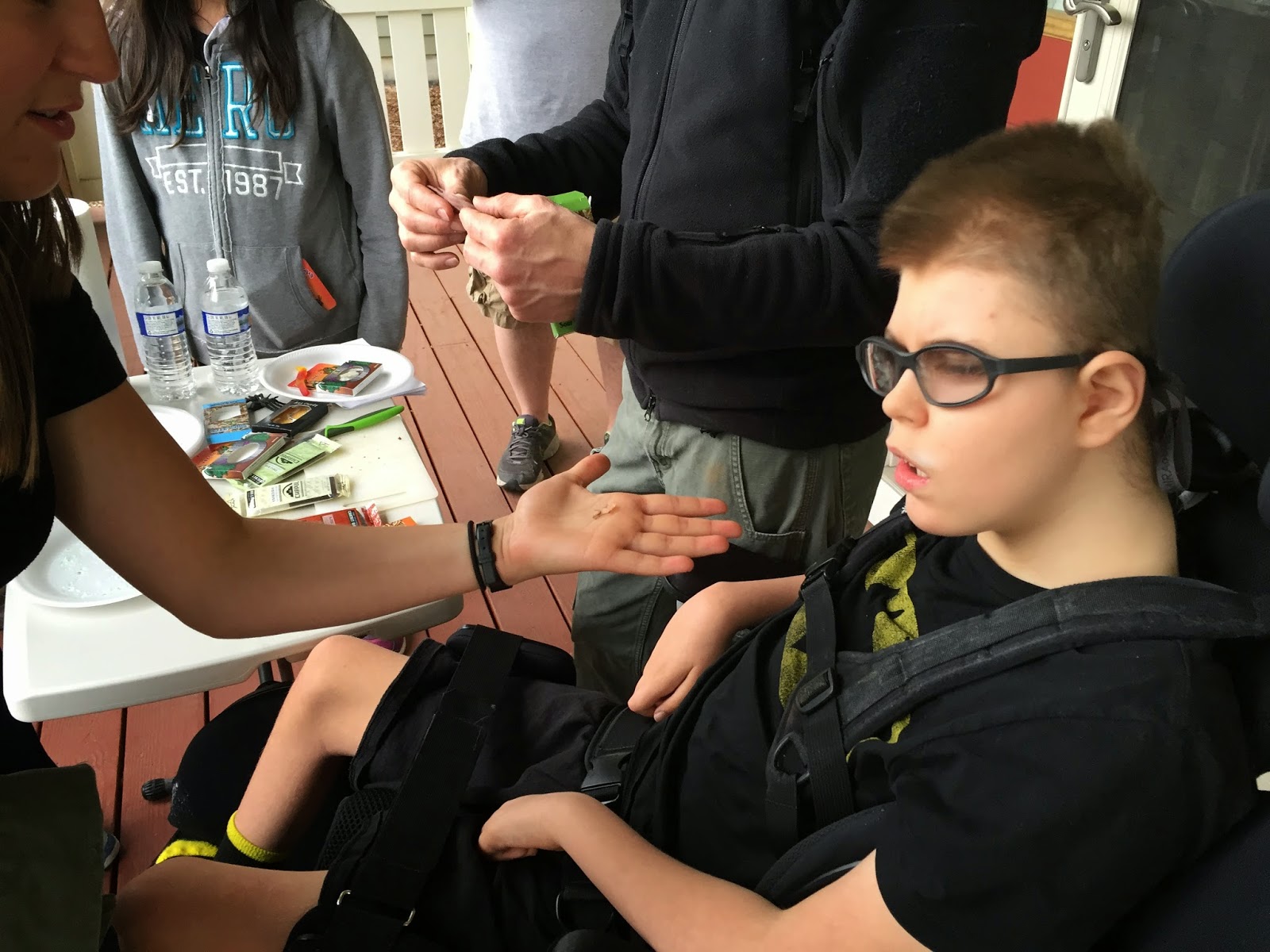 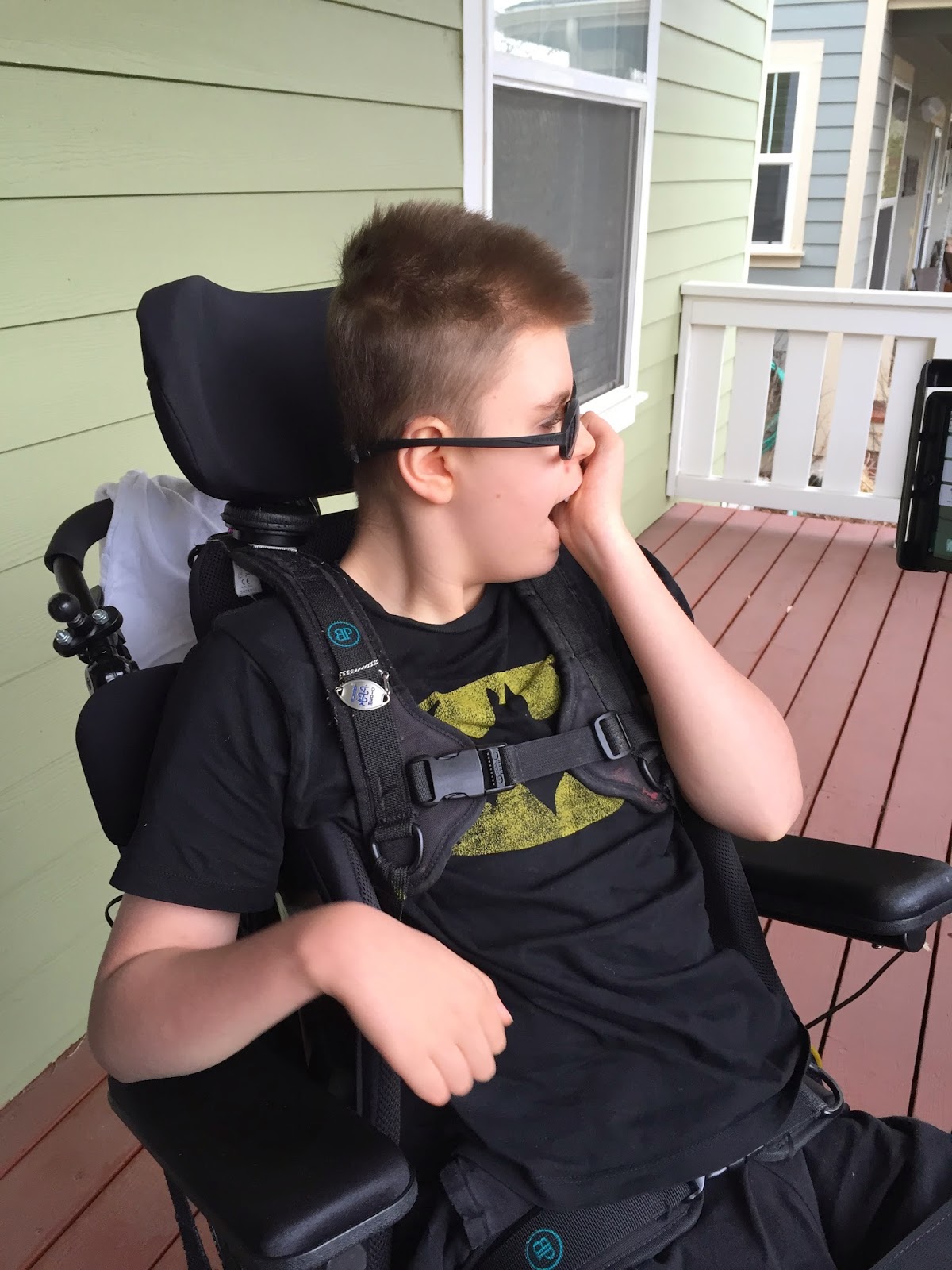 The boys tried everything.  And mostly thought they were good.  The kids didn't really like the cricket bar made of coffee. And our lone girl was skeptical of everything at first, but then gave them a go with the chocolate covered crickets.  Then she was game to go back and try everything else.  The adults were happy to add to his data too.  They all thought they were fine.  I don't think we'll start stocking them into the pantry, but they weren't disgusting. Max asked for a turn, but we had to wait until he tasted them with his teacher, in case he would have any allergic reactions to them.

He loved having his friends there helping him with his project.  They helped gather his data, and gave him plenty of photos for his board too.

The next time he saw his teacher, they had their own taste test.  While Max can't eat by mouth, he can taste and he got a real kick out of "eating" bugs. 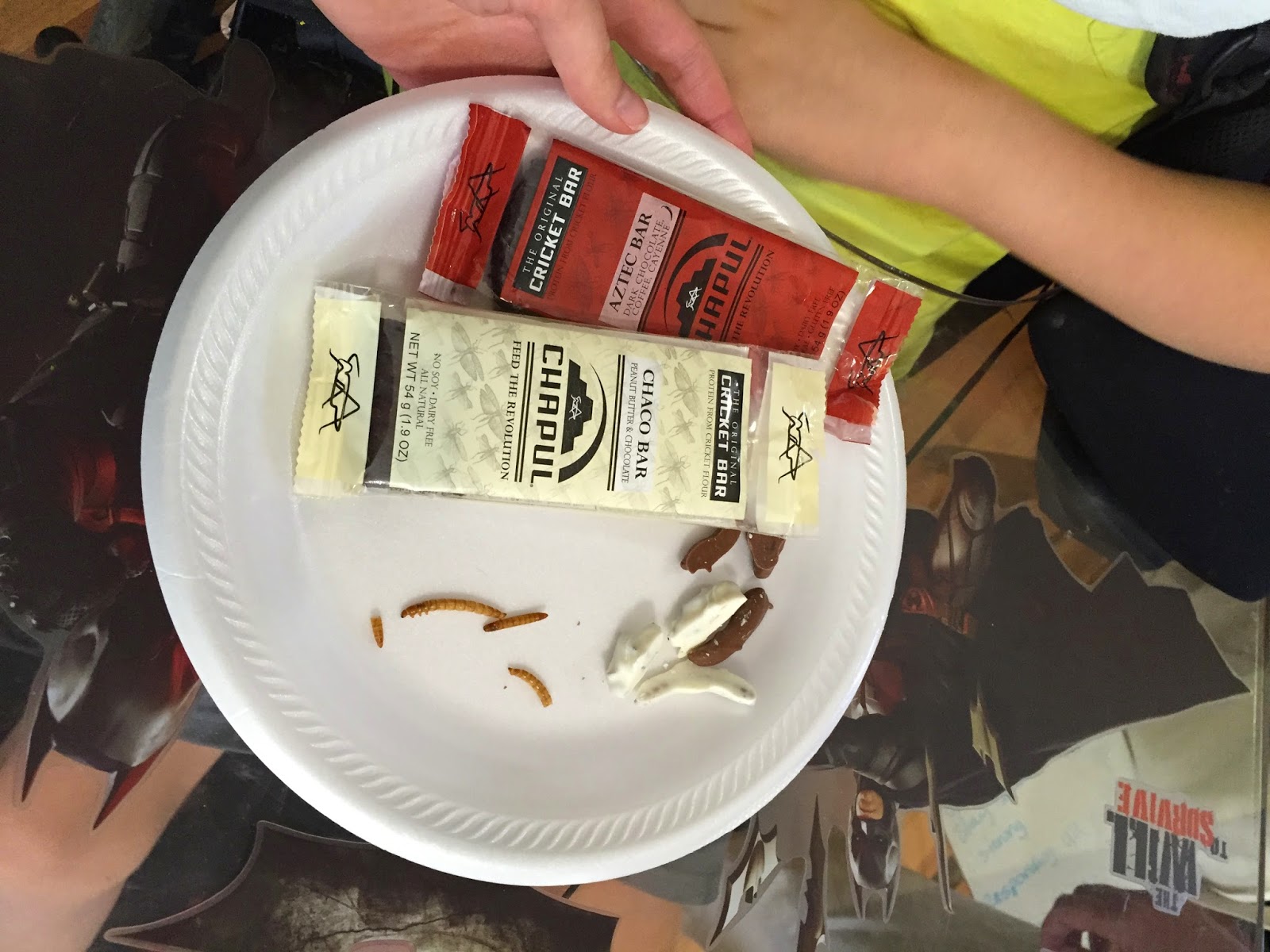 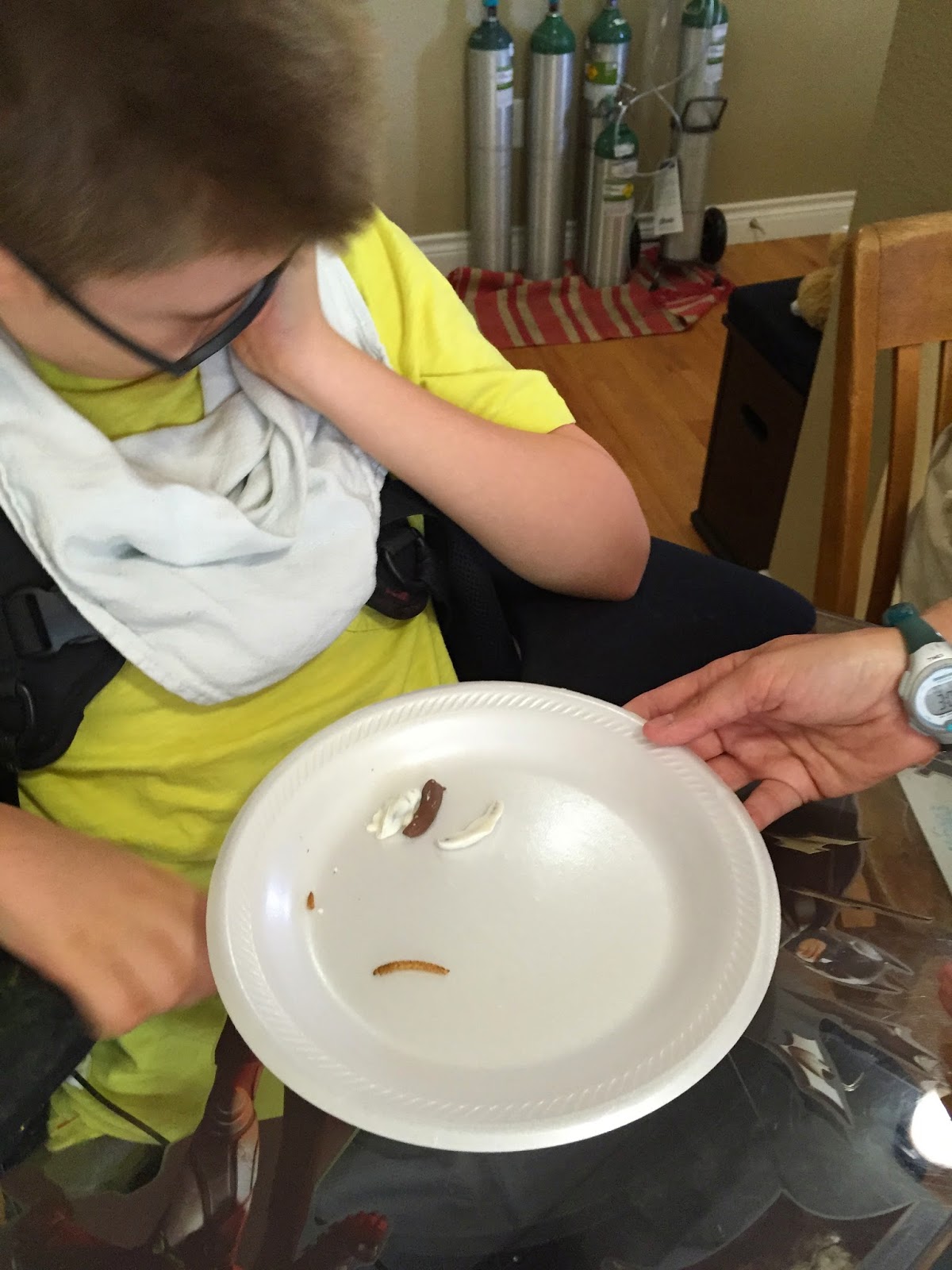 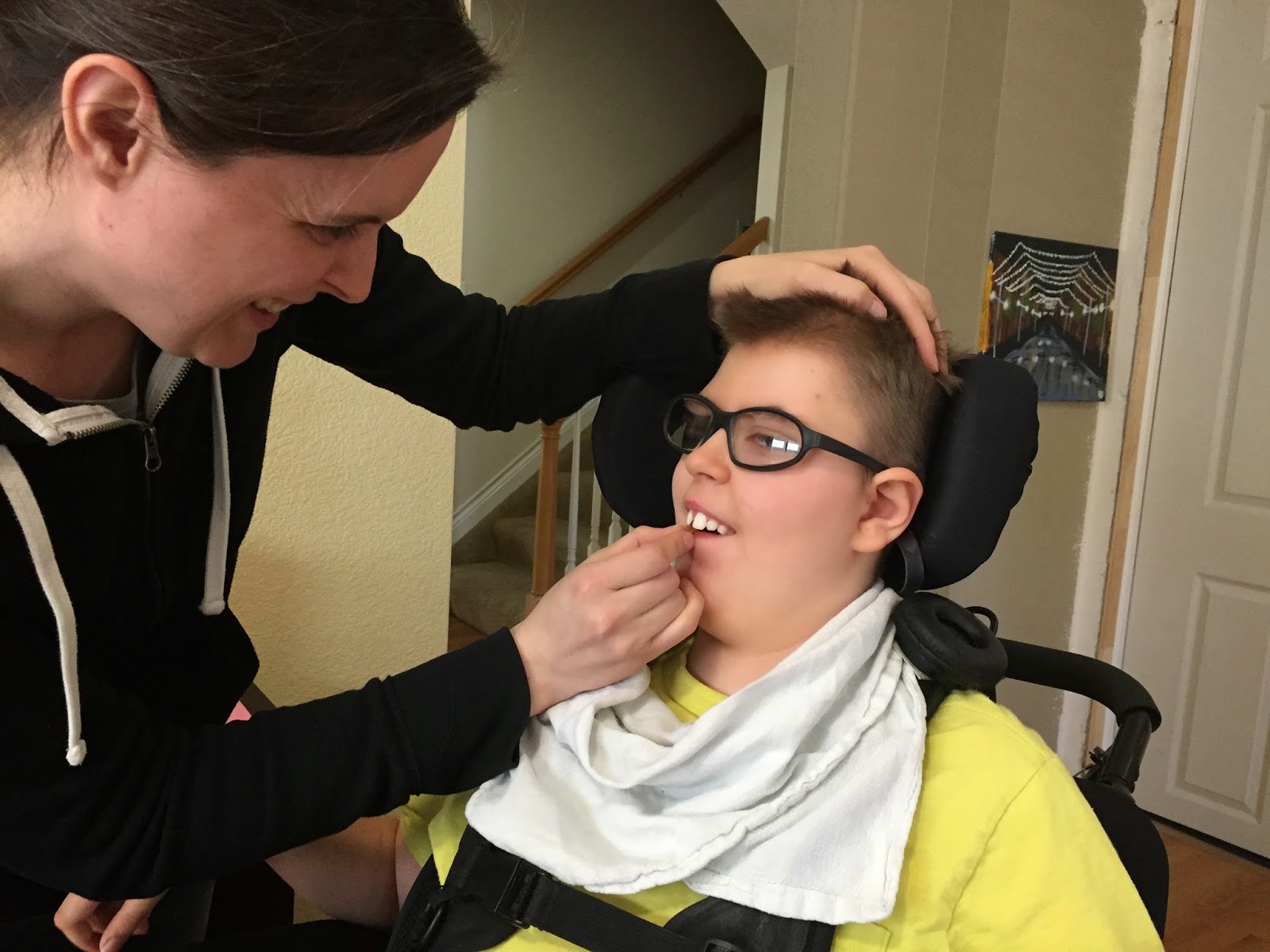 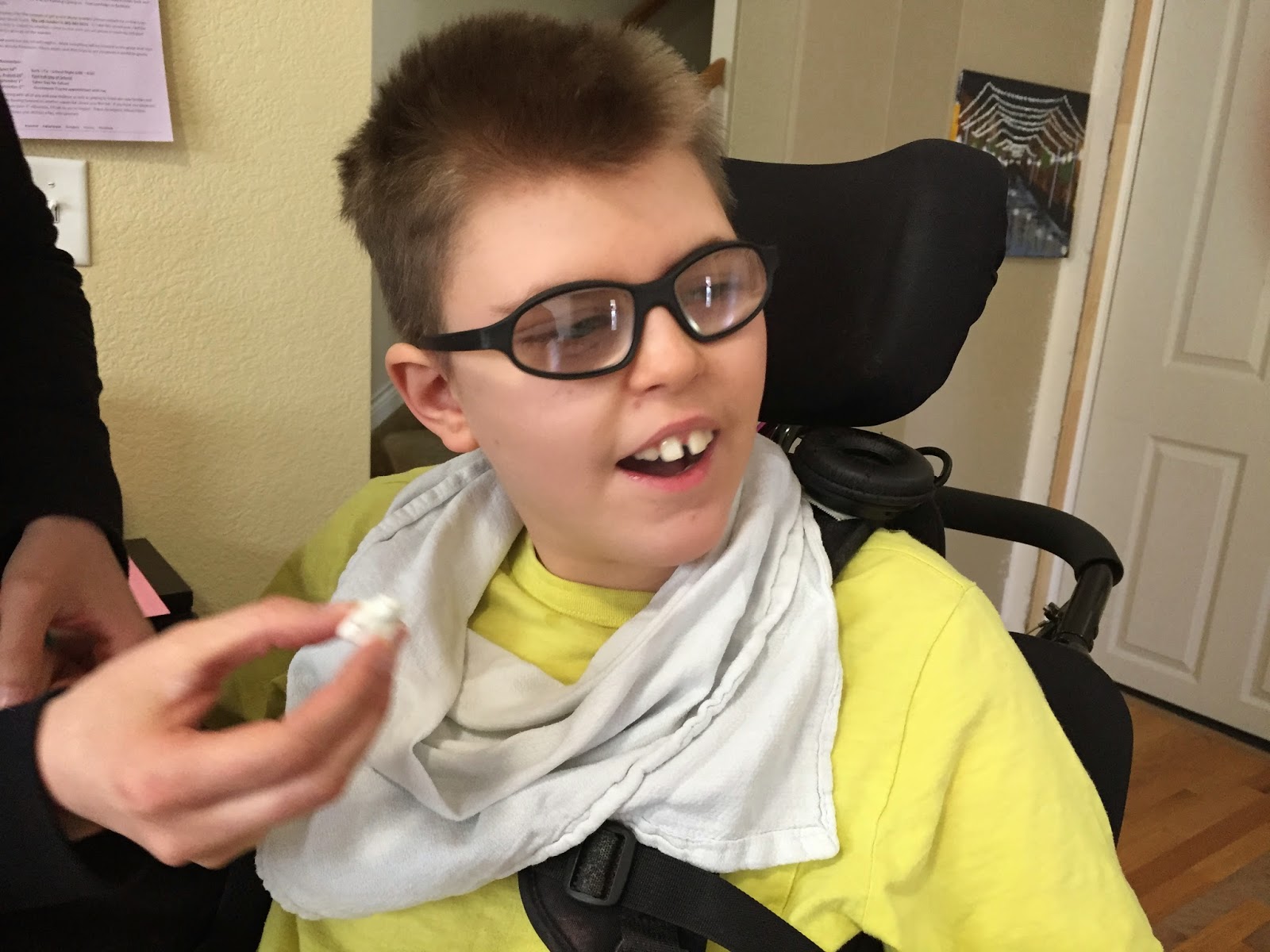 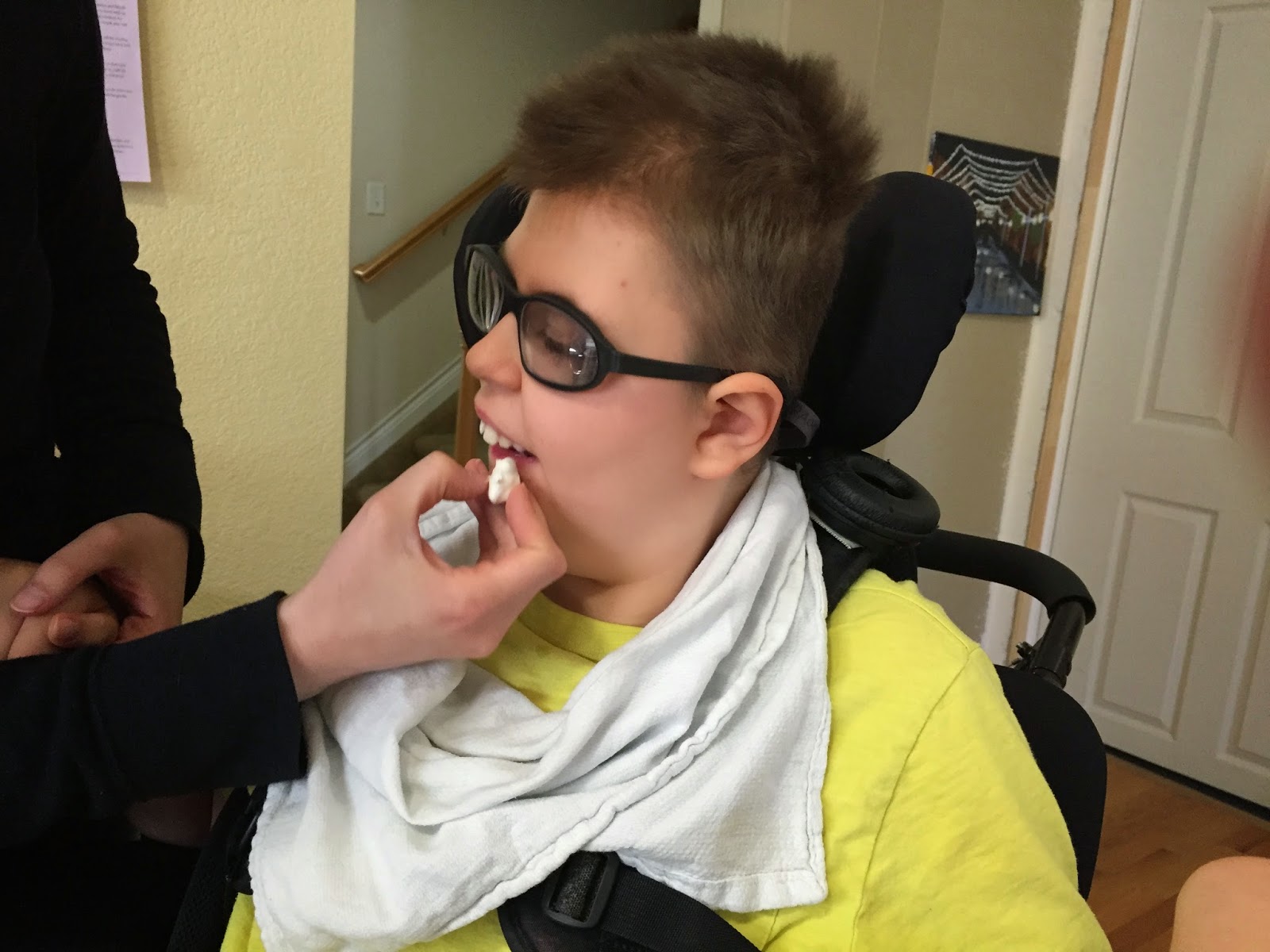 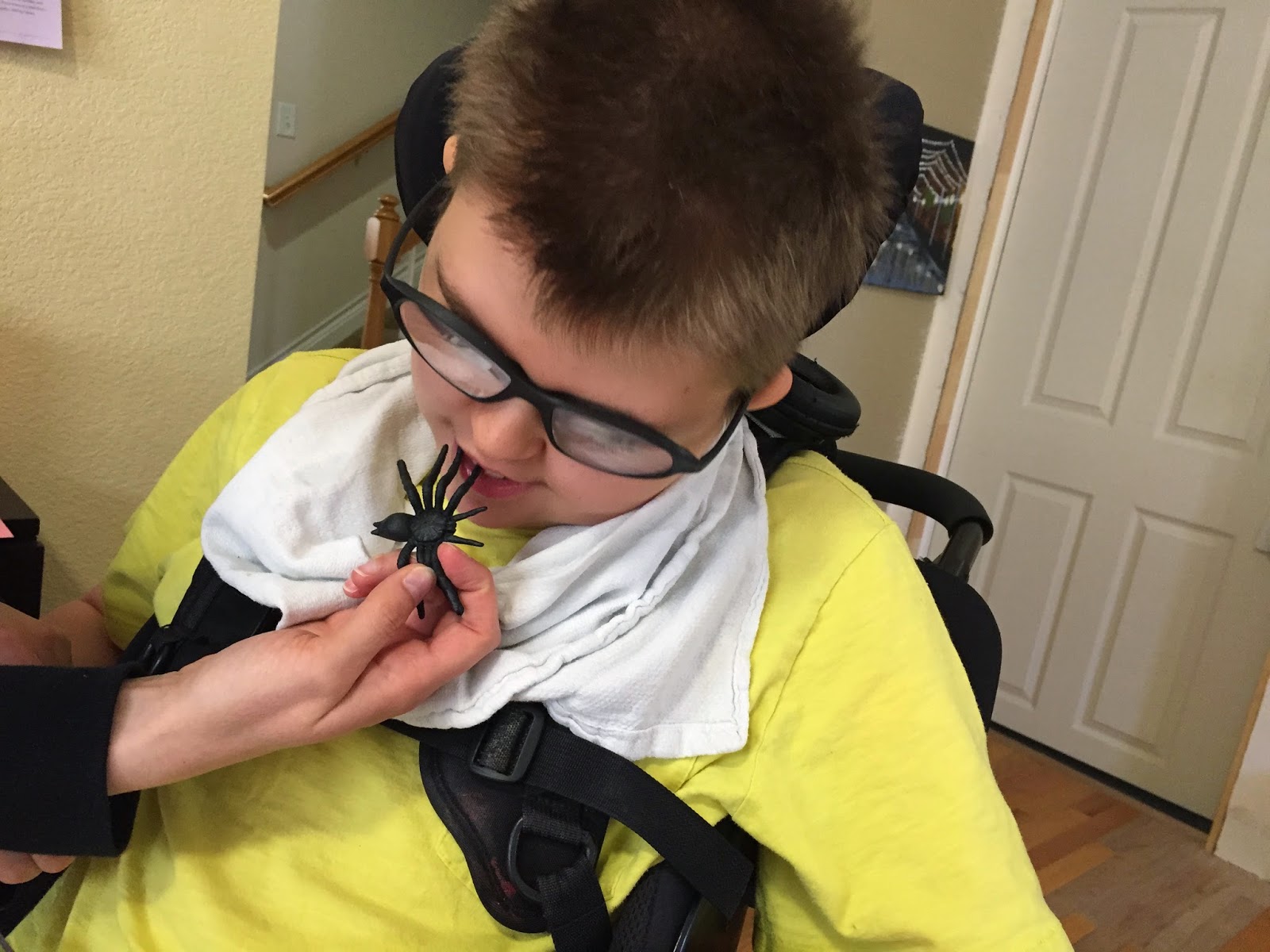 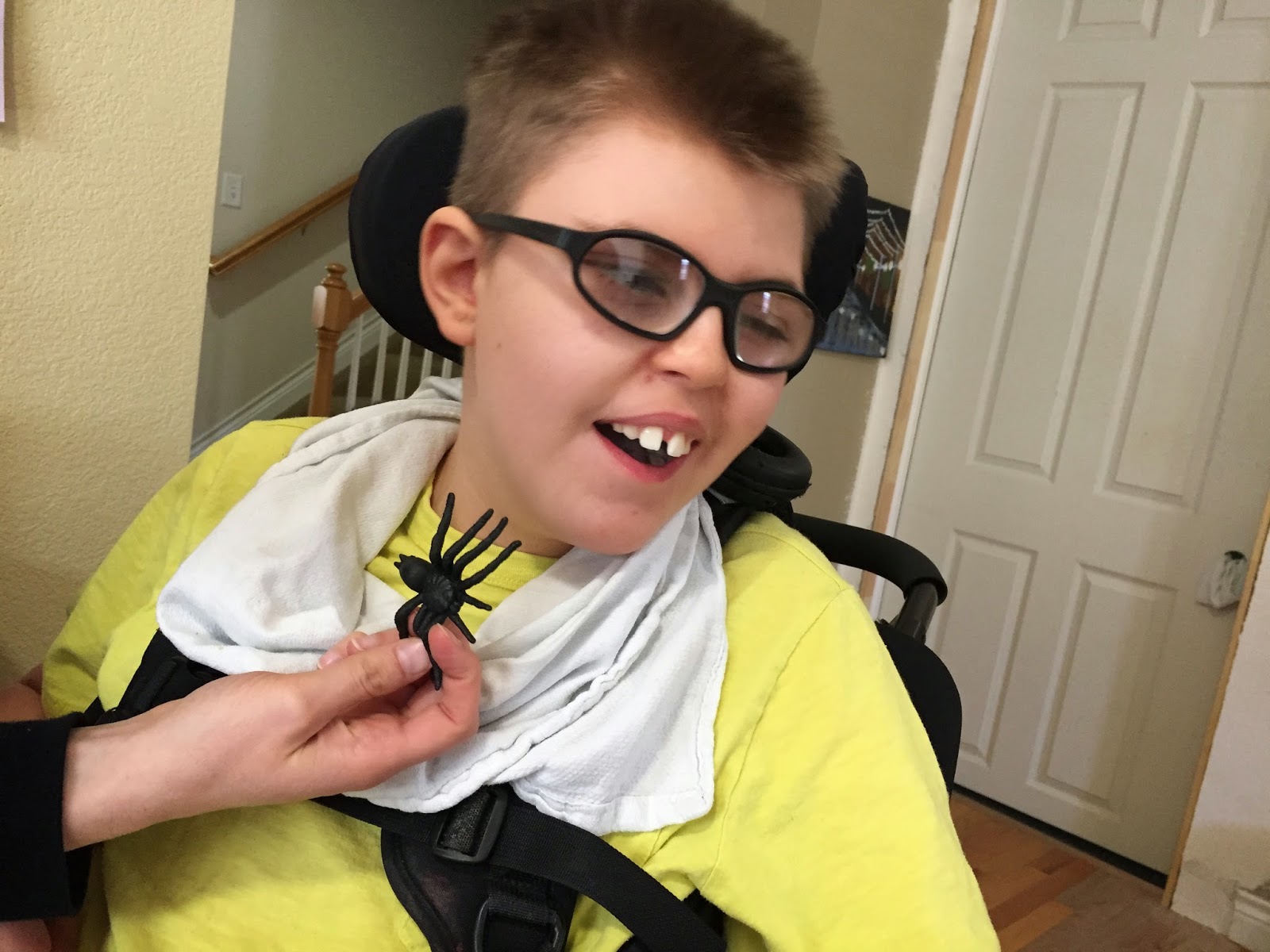 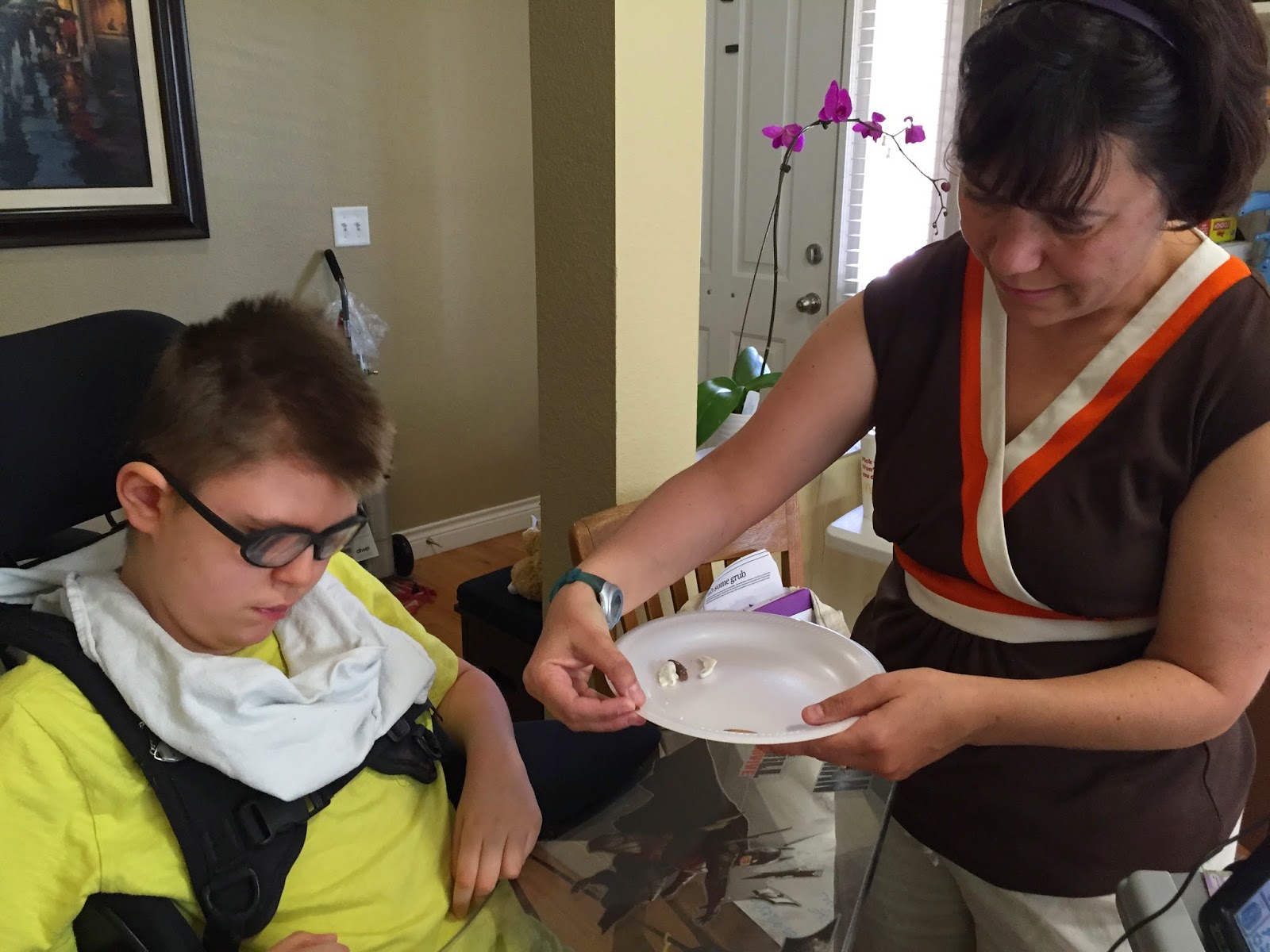 Max tried the worm first, then the chocolate cricket.  Then he thought it would be just hilarious to "try" a huge spider to trick everyone.  It was absolutely not real, but he thought it was really funny. Max's teacher was a good sport, and she tried some too.  She thought it was okay, but said she felt like she had a cricket leg in her mouth all the rest of the day.

We worked the rest of the week getting answers from him on where he would like things on his board, as well as finalizing his wording.  Although we put it all on for him, Max learned everything on it as well as came up with the hypothesis and conclusion.  Which was, his hypothesis was not correct girls and boys and adults liked the insects.

The science fair was at school this week.  Max hasn't been able to go to school in many months because of colds and flu.  He was so excited all week to get to go see all his friends and teachers. And they were all happy to see Max and see what he had been up to with his project.

We had some more crickets and worms for his classmates and their parents to try.  None of the teachers were interested. Although, they all stopped by to see his work. 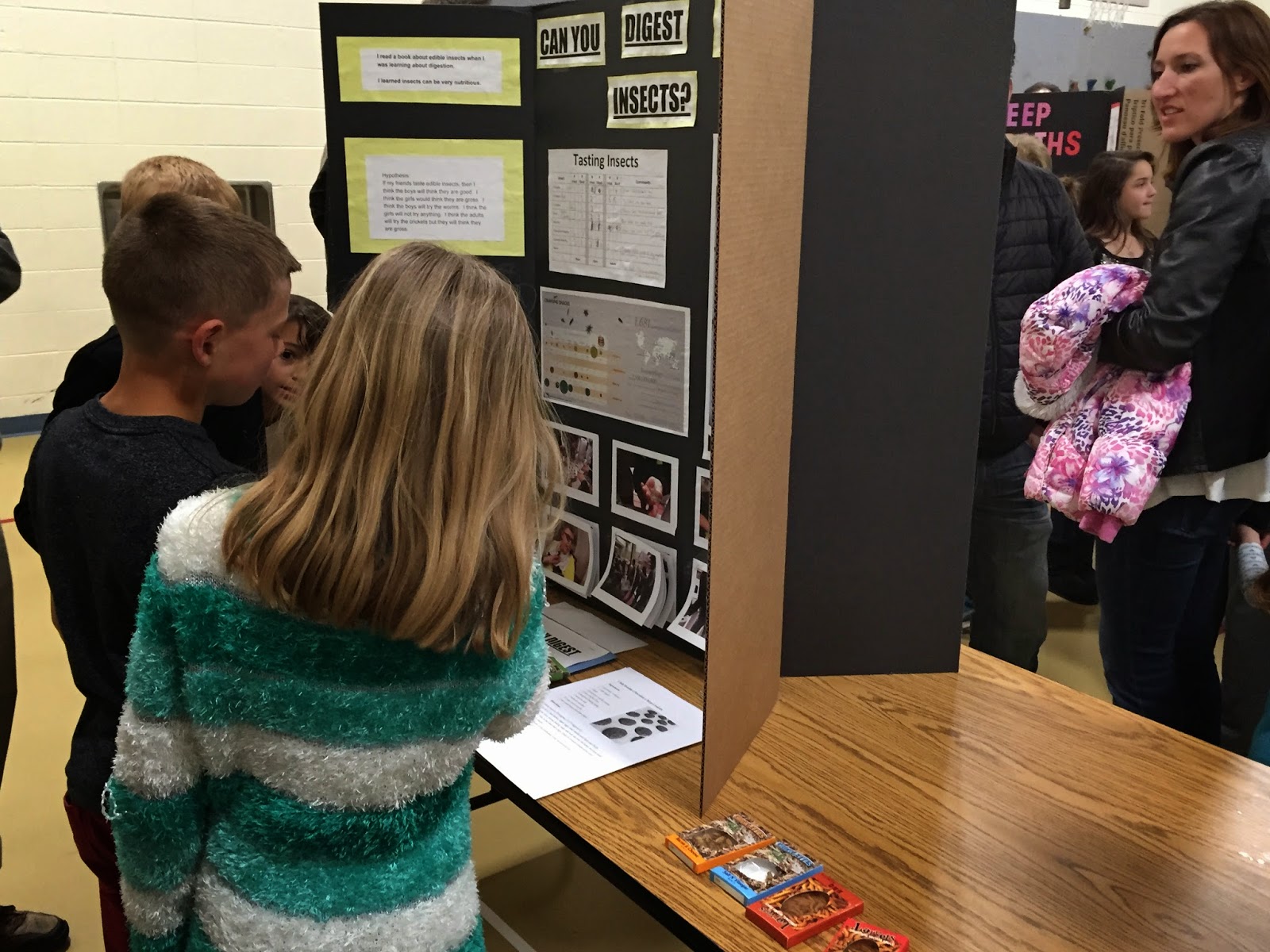 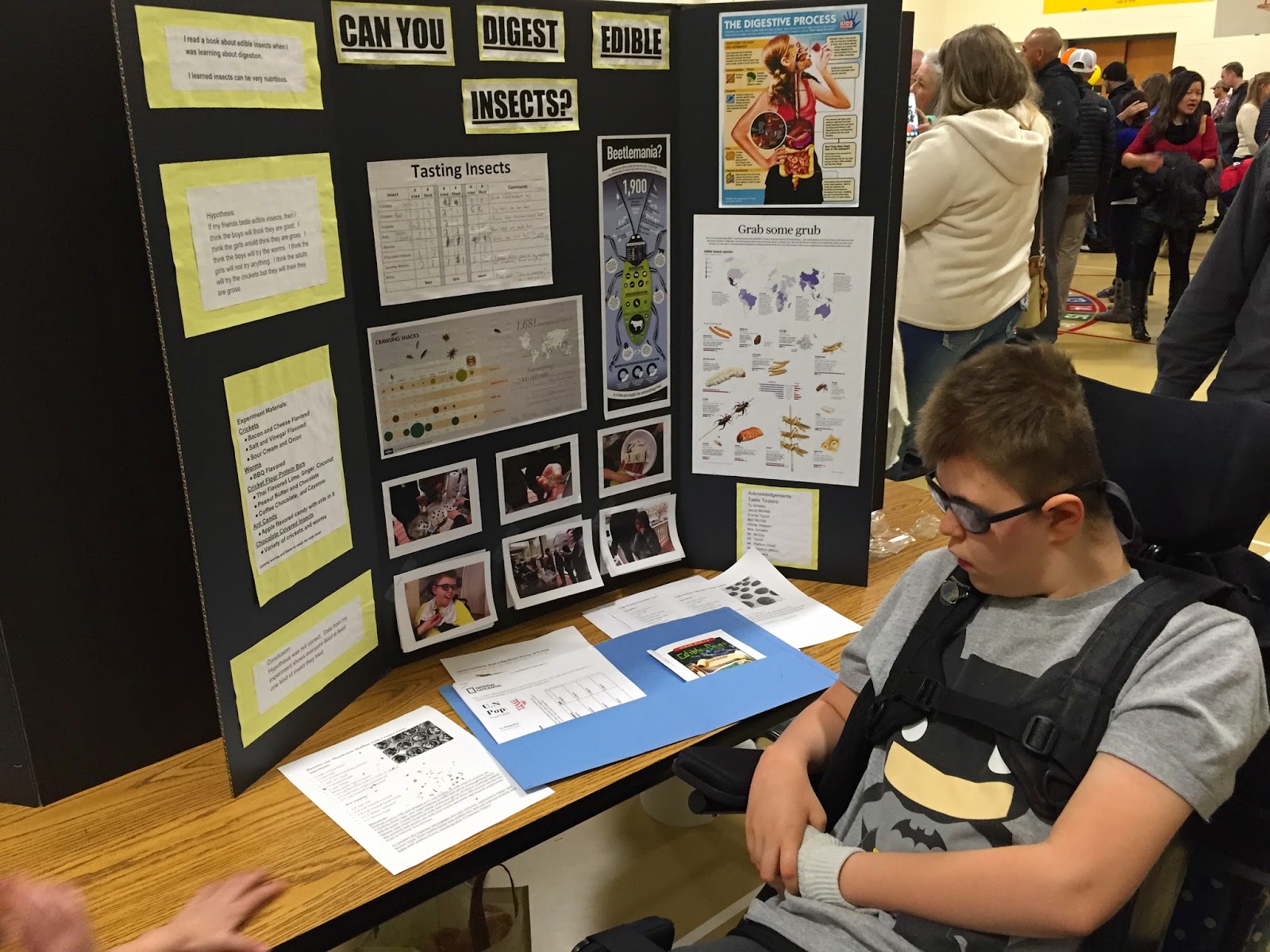 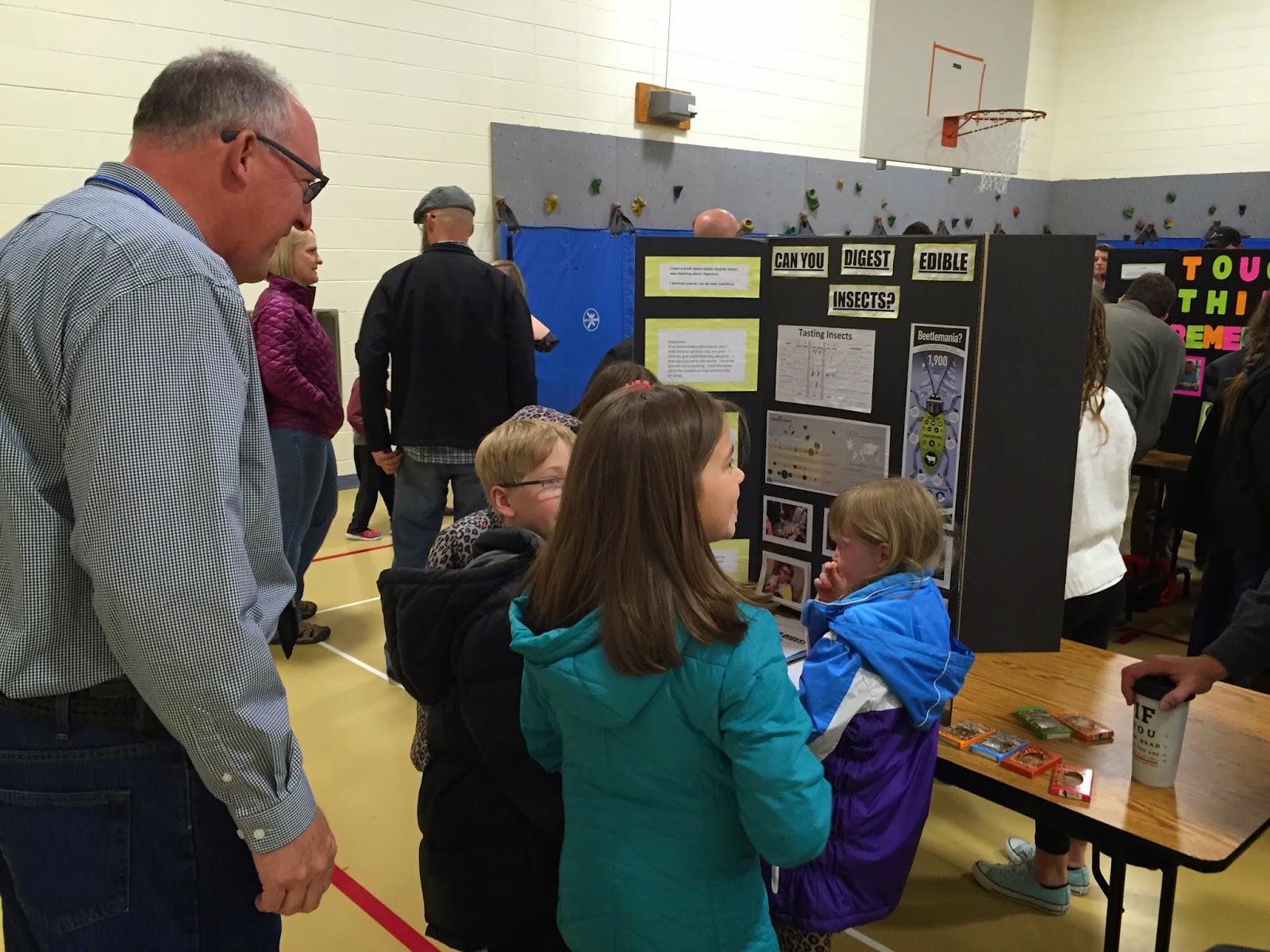 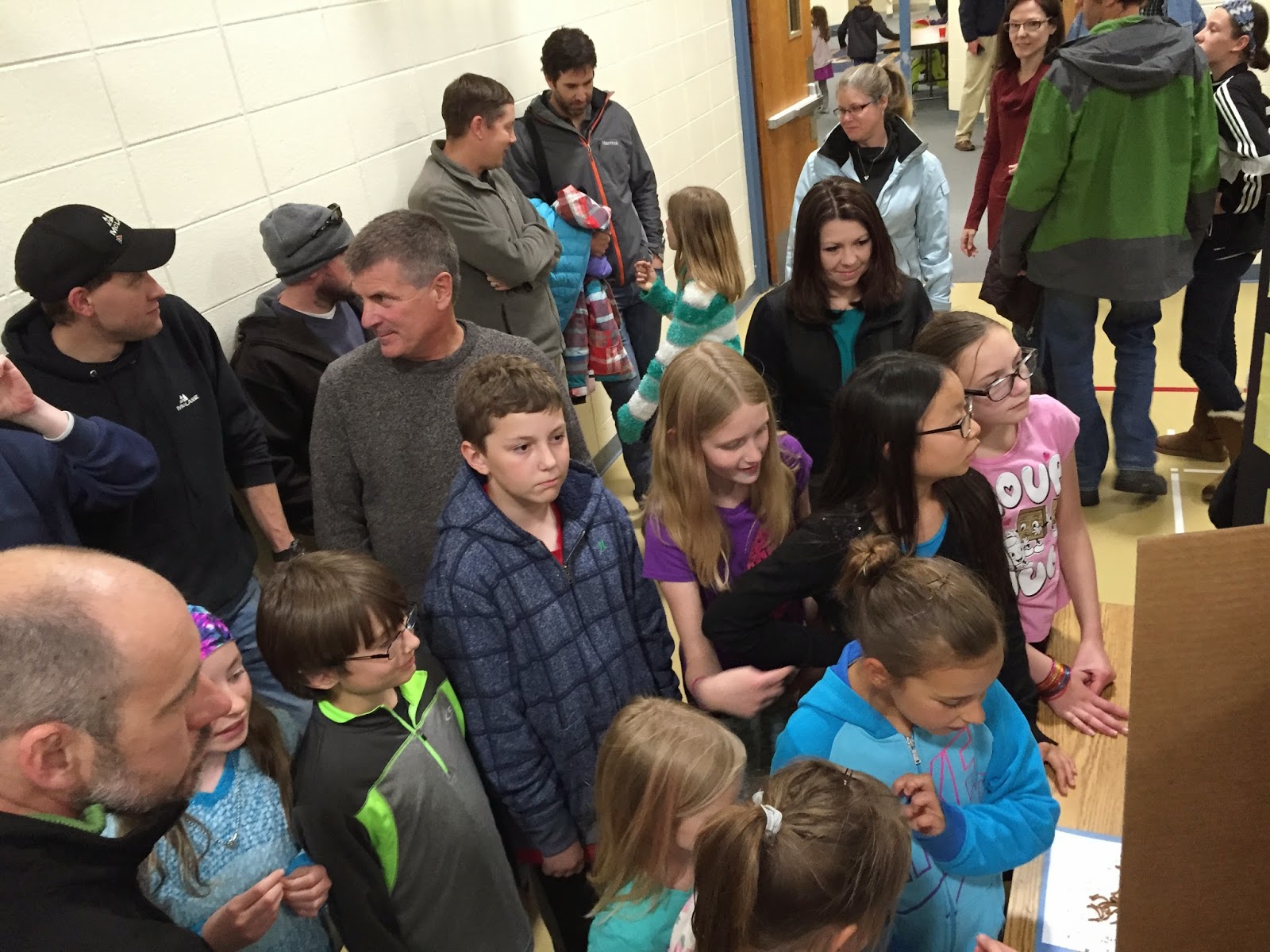 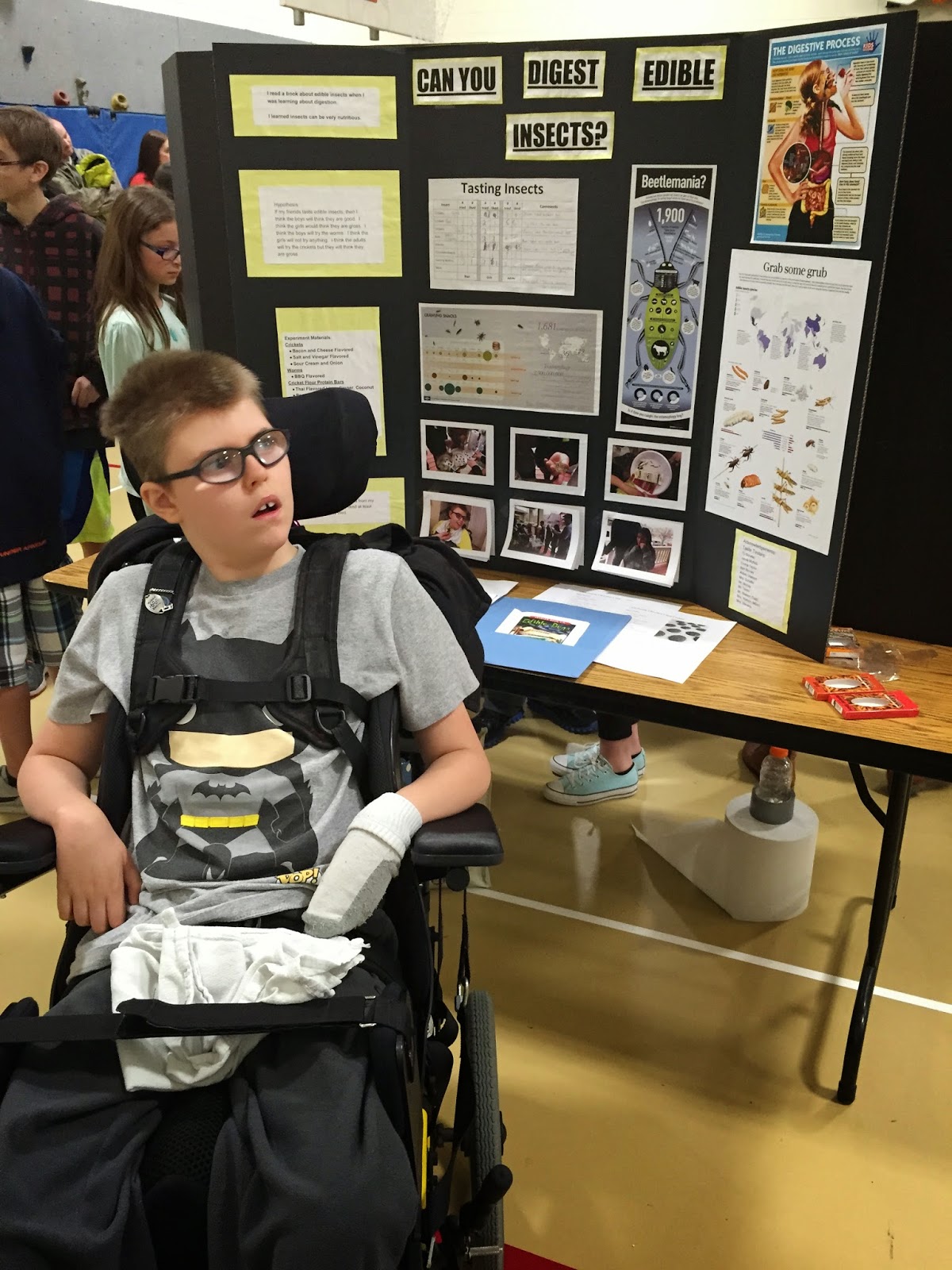 We were very proud at how much attention he gave to his project.  And again, grateful to his friends for participating.  He had so much fun with them all.  It's hard to believe he has just one more month at his wonderful elementary school....and then, middle school awaits, along with new and old friends and new adventures!