The last day of February is always Rare Disease Day. It's a day to show support with those who live in the rare gene community. And to raise awareness in the medical community to offer more treatments for those who live each day with rare diseases.

Max's list of rare diseases is long. He was the first diagnosed of 14 boys in the world with the rare disease Cobalamin X. He has rare epilepsy, Lennox-Gastaut preceded by Infantile Spasms. He had Chilaiditi's Syndrome that caused all of his intestinal problems. It is rare on it's own, but extremely rare in children.

Yes, Max is rare, but like so many other with rare diseases, he's taught the medical community so much about how genetics work.

If you are looking for ways you can participate in Rare Disease Day, you can first wear jeans for Max. Take a picture and post it on his facebook page. He'll get a kick of everyone wearing jeans to show they care. 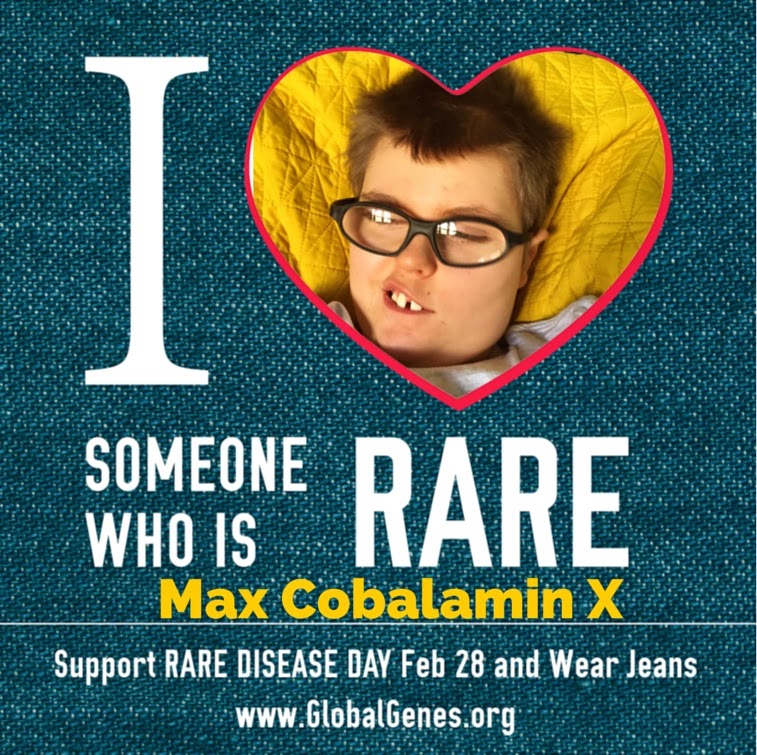 You can click on this link to have a $1.00 donation given towards more research on rare diseases.  http://rarediseaseday.us/raise-your-hand/

"By raising your hand, you have just shown your support for the 30 million Americans who are affected by rare diseases. Thanks to you, Lundbeck has made a $1.00 donation to support rare disease research (up to a maximum donation of $10,000 for the campaign). The money raised will be contributed to a general research fund managed by the National Organization for Rare Disorders (NORD)."