Max took last week to get the rest of the way better.  He had a bit of a cough that would get him choked up, and needed oxygen for a few days.  But, really the thing that has been lingering for him is he has been sleeeeepy!  I don't think he's been out of bed last week or this week before 10:00, and has slept all night every night.  Here he is taking a snooze on the floor with his super hero blanket from one of his buddies. 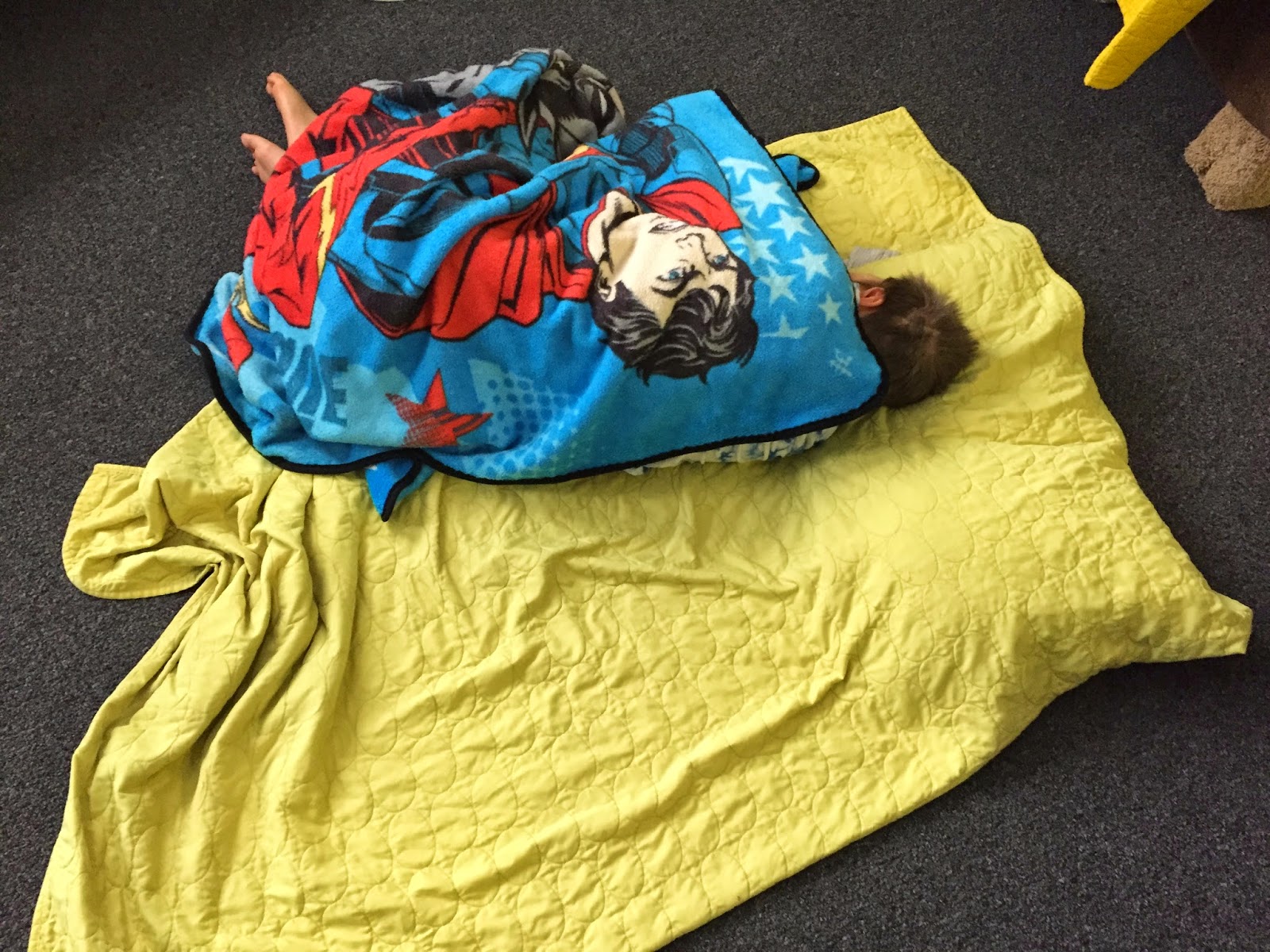 Last week was also full of a lot of trouble getting one of Max's medicines refilled.  Max has to take testosterone injections each month because he doesn't produce it himself any more.  Once we got the doctor situation sorted, but gave him the injection and next came the crying, and laughing, and raging and sweating.  We've been told he shouldn't have these sorts of reactions to it.......but I beg to differ. I've been taking notes, photos and videos to show how it is bothering him.  Here he is with beads of sweat on his brow...it was 25 degrees outside, 65 degrees in the house.  His shirt and quilt were soaking wet from seating, and he had sweat rolling down his face.  He only does this a few days after his testosterone shot every month. 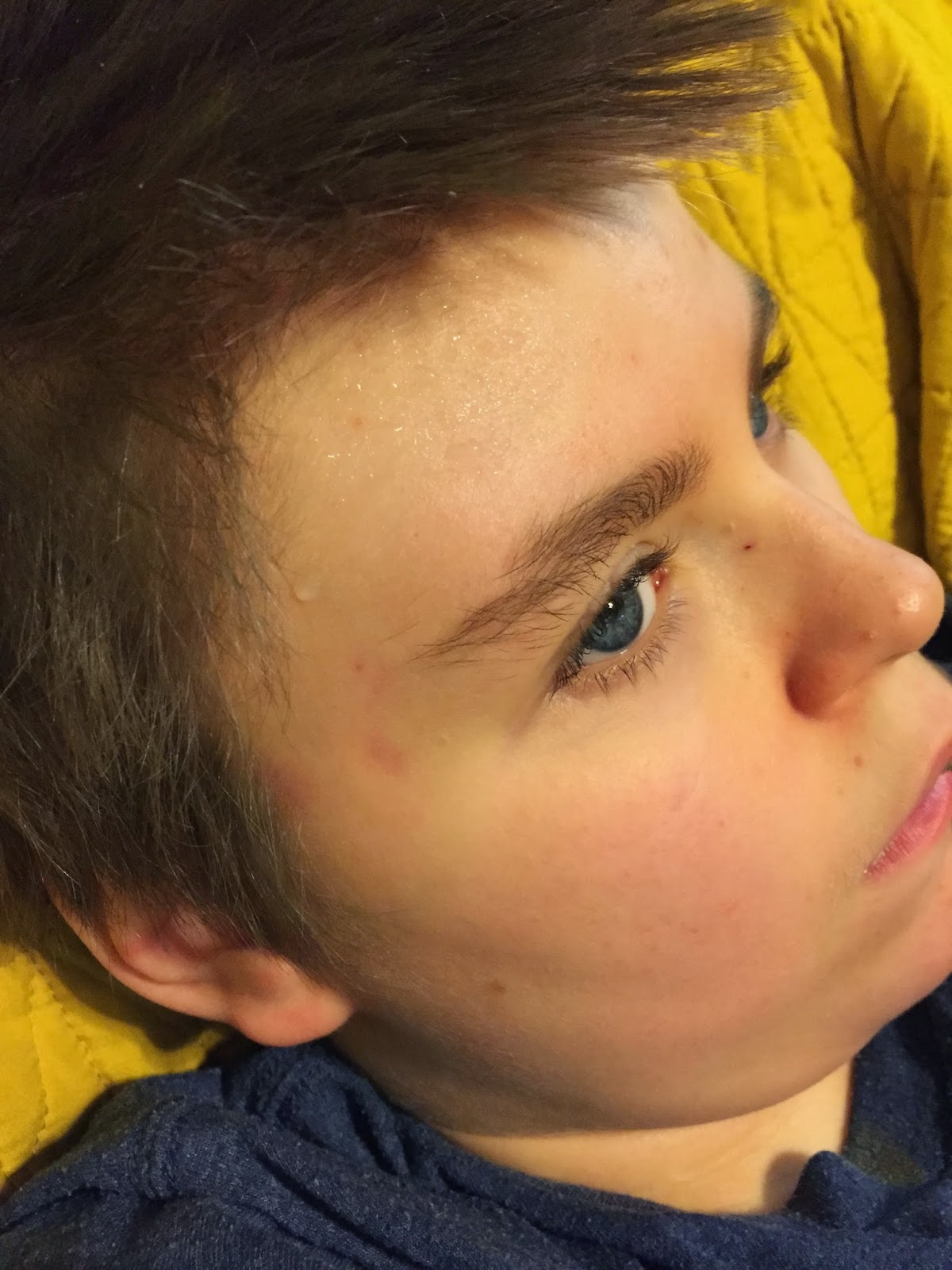 This weekend was actually nice, so we decided to try to get Max out in the sunshine.  He wanted to go see the trains and get ice cream at the train station.  Max gets little tastes of things, and sometimes he just likes knowing that he could have a bite if he wanted one, since he takes all his nutrition through his gtube. 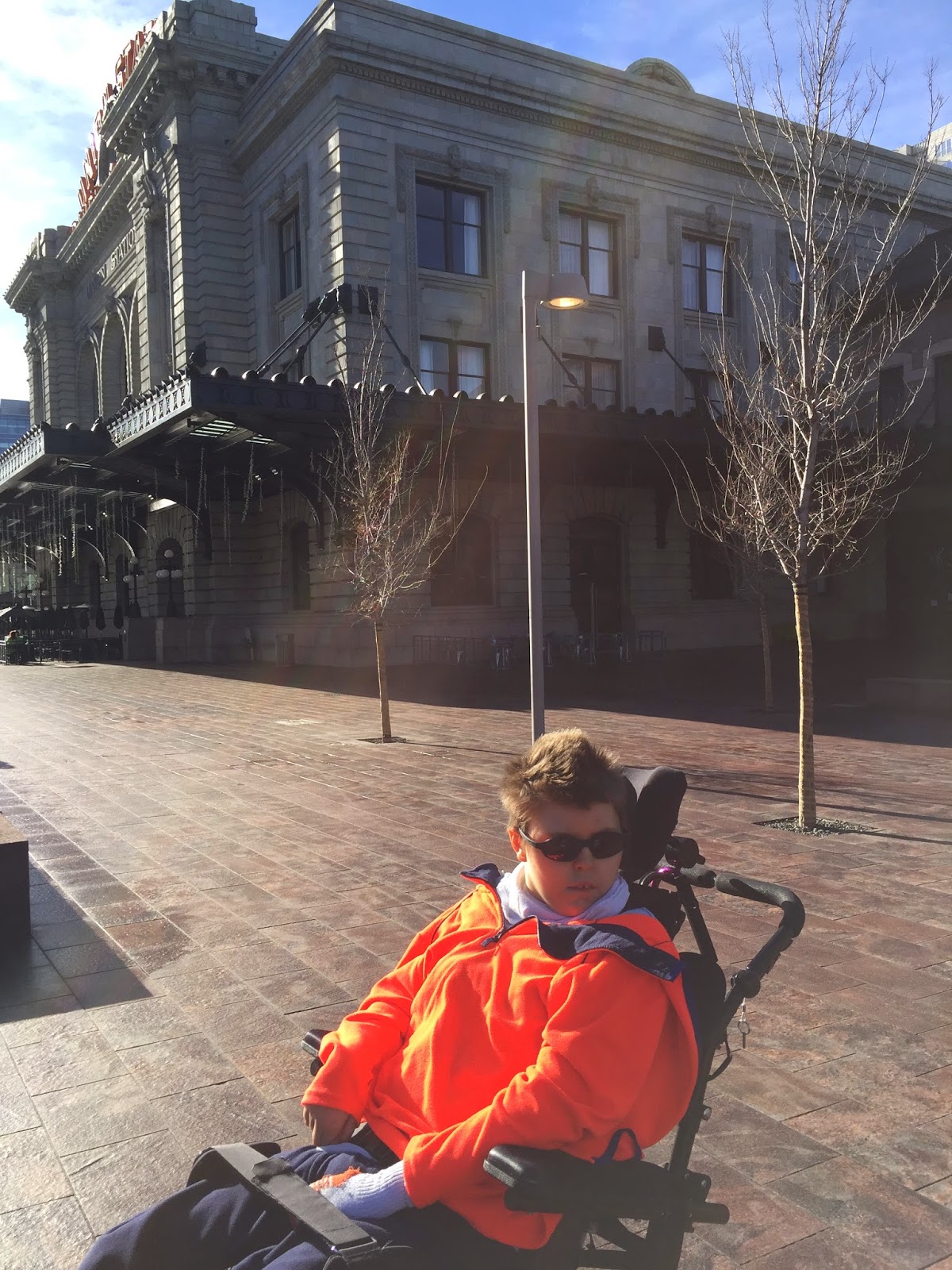 On Monday, school started back up for Max.  Since next week is Martin Luther King Day, Max has been learning more about his favorite historical hero.  His teacher found a new book they haven't read yet and he answered all the questions right.  He told her he wants to go to Washington D.C. to see the memorial.  He also said again this year that he has an idea...his own way of saying "I Have A Dream."  We are working on him telling us what his Idea is. 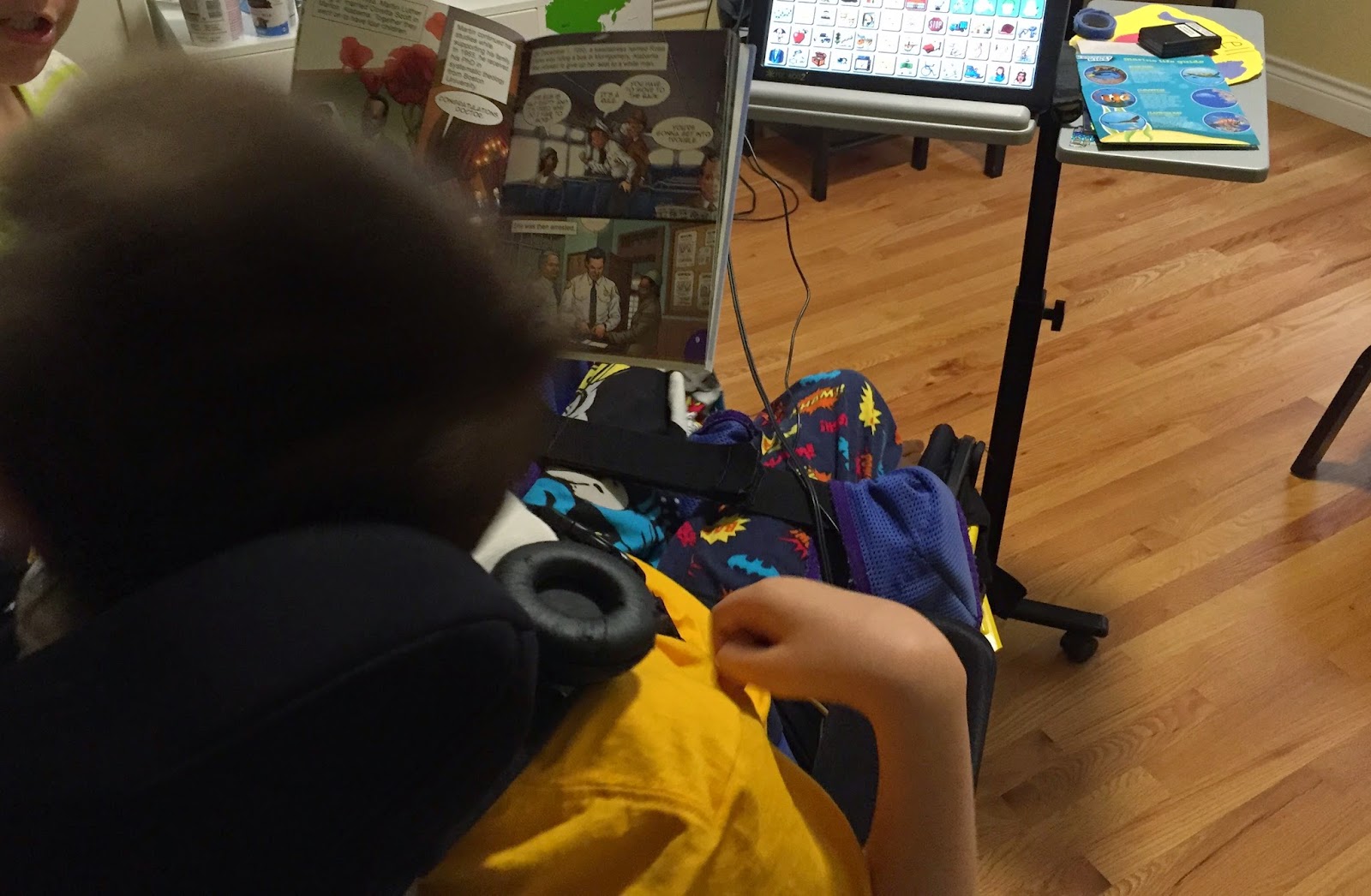 In music, he and Ms. Laura are working on a song about Dr. King.  Max was happy to be strumming and singing again.  He also was working hard on his piano playing, but I didn't get any photos of that. 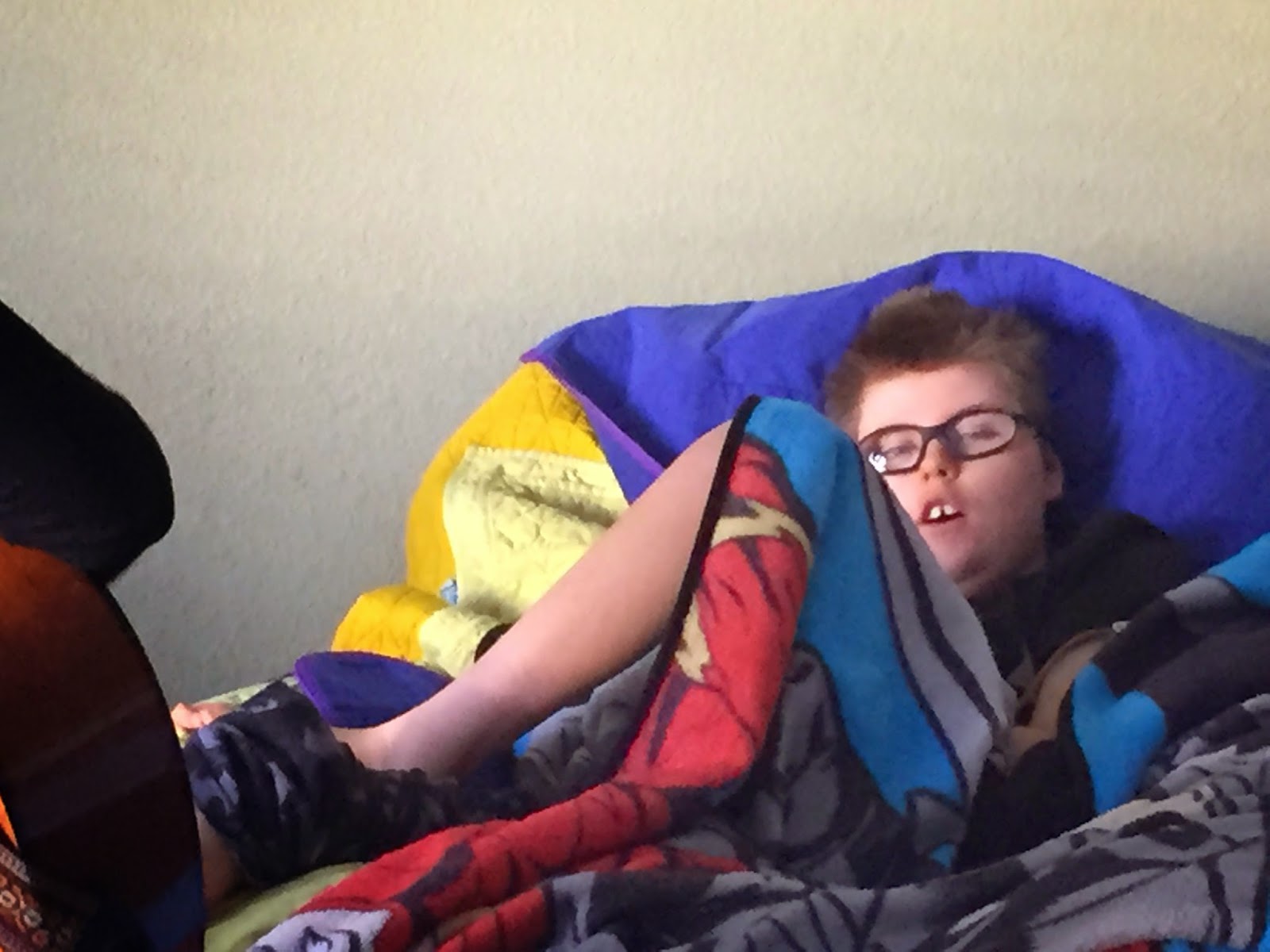 Max and B have been working on their next project together in Speech therapy.  He is writing a new book about his people.  Max always enjoys talking about the people in his life, and he's compiling a list of some of his favorite people to talk about.  Today, he said he wanted to write about Officers, and how he would like them to come play with him.  He also told us earlier in the week that we missed that he wanted officers for Christmas. 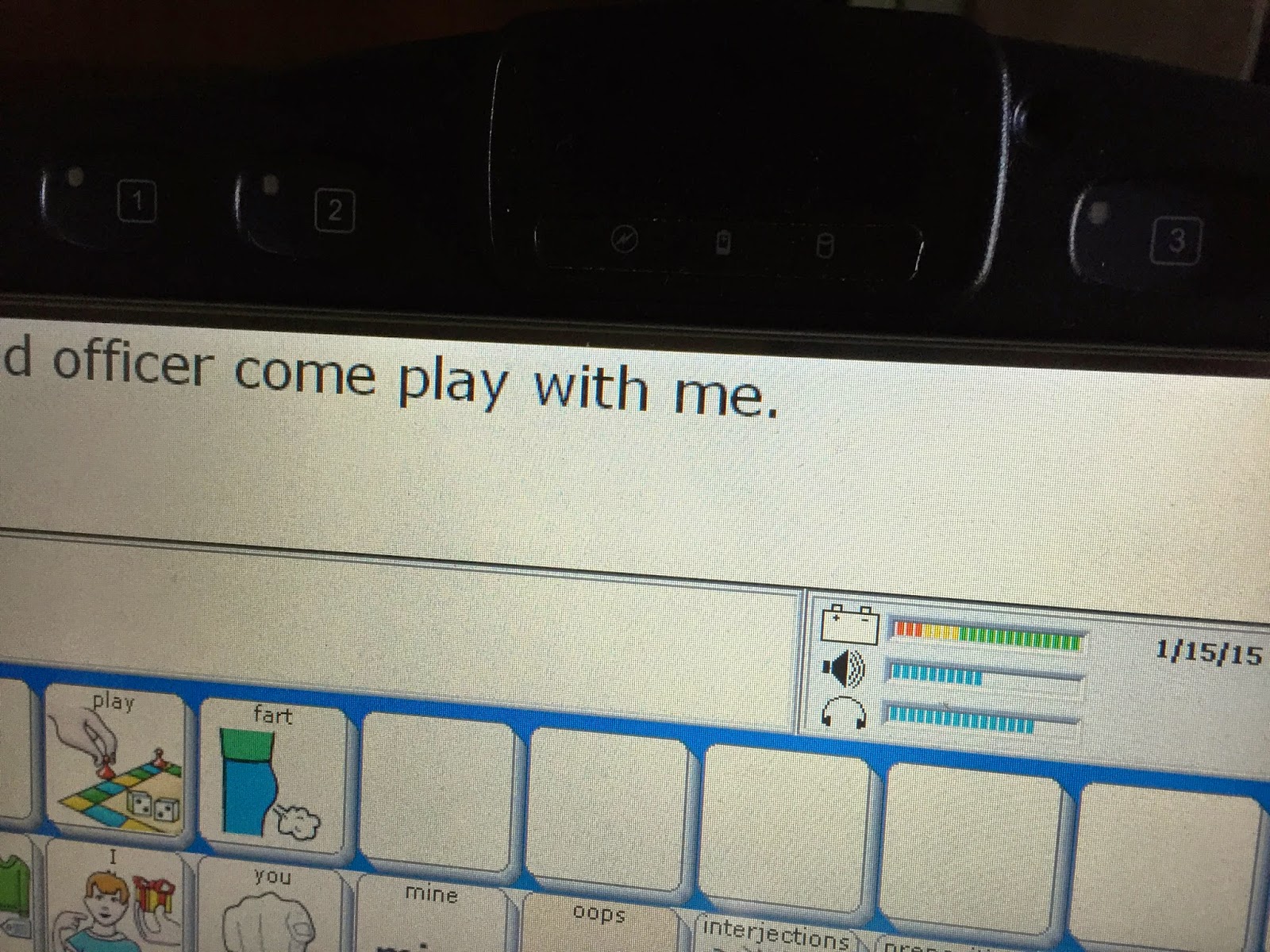 His Daddy has been gone all week for a conference, so he's excited to have him back.  Max thinks we will have to get out for a visit to his favorite park in the warmer weather...I agree with him!  We're definitely ready to enjoy some warmth and sunshine!