Earlier in the month, Fireman Santa came and visited with Max.  Max loves Fireman Santa, and had it all figured out what he was going to tell him he wanted for Christmas.  He came up with it all on his own, and it was a big request that only Santa was going to be able to pull off.  Max told us he wanted a "backstage Washington" experience.  With further questions, we figured out he wanted a backstage experience at his favorite park.  We told Santa all about it, and said he was going to have to figure it out for him, because we weren't sure how anyone but Santa could do it.

Fast forward to today.  It was sunny and beautiful and we knew Max would love to go to his favorite park before more weather rolled in.  We parked and ate our lunch in Max's van before getting out for a walk around the big park.  We always park in front of one of the park's large ponds and remarked on the hundreds of Canadian geese on the frozen pond.  They started flying away in huge groups, honking and flapping, making a ton of noise because of this little orange ice robot scaring them off. We watched as a man on the side of the pond was directing this ice gliding robot towards the geese and they would fly off.  I thought at first it was just someone harassing the animals and didn't think it was very nice.  Then we noticed it was a park ranger and he was trying to get the birds to fly off for a reason.  We think so they don't get stuck on the semi frozen pond and get hurt.  He had nearly gotten them to all fly away when he hit a bit of water and part of the glider broke and was stuck in the middle of the pond.  He got in his ranger cart with his ice gliding robot and that was the end of our show.

We took Max for a walk around the park, and by the time we got back to the van, the ranger was back and so was a large firetruck with a big yellow boat on it.  Denver Fire Department came out to practice a water rescue, but also to retrieve the part of the park ranger's robot that broke off.

It was a perfect opportunity for Max's backstage experience at his favorite park to take place.  We walked Max over to watch them get the big yellow boat ready to get in the water. 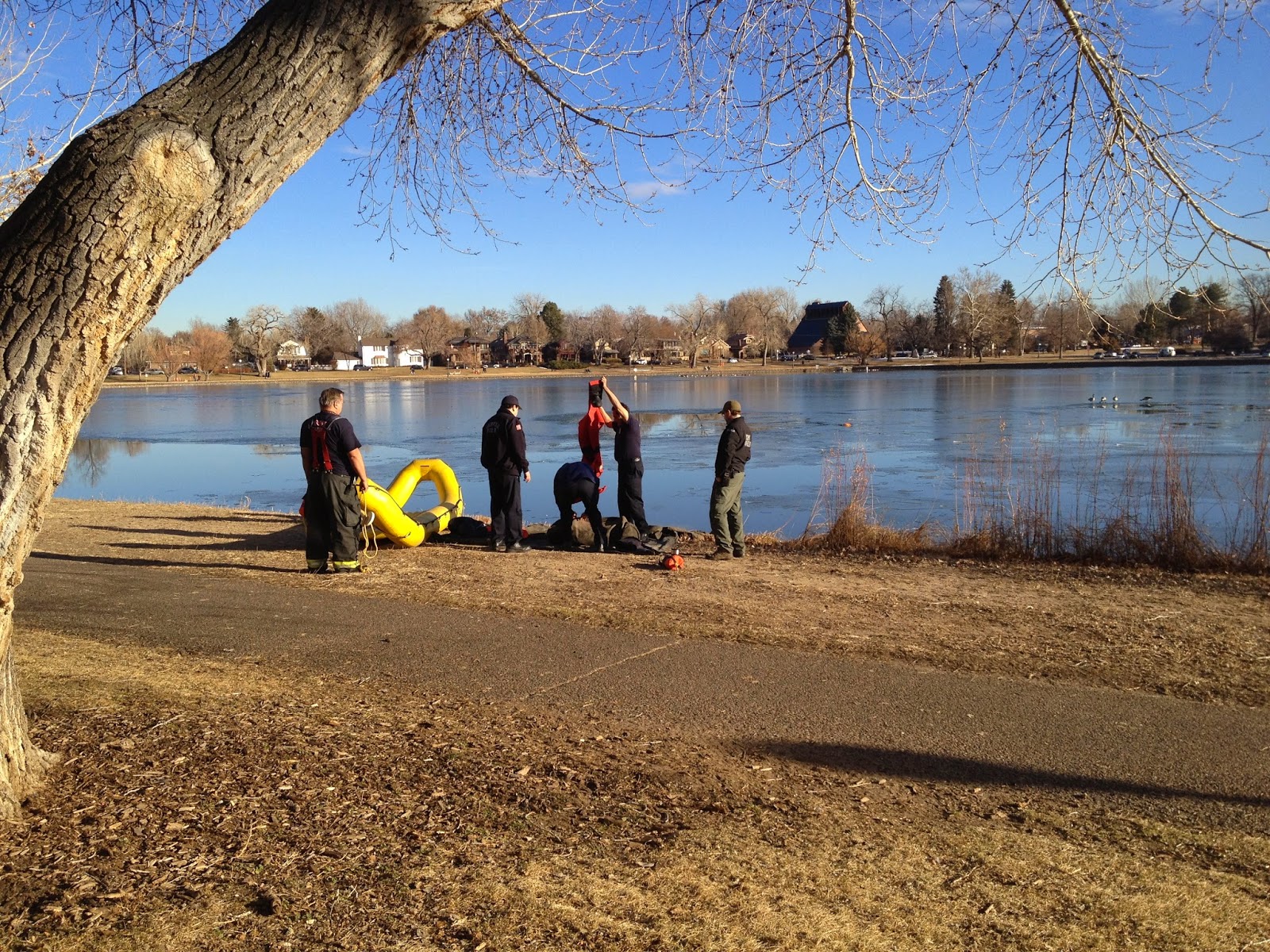 We told him this MUST be what Fireman Santa fixed up for him for his special Christmas request!  His own special backstage experience watching the firemen get out on the frozen water!  One of the firemen got on a bright red suit...proof again that Santa had something to do with it.  We told him this was something special that almost never happens unless there is someone in an emergency, and when it's an emergency, you don't get to watch that closely.

He got in the yellow boat and started out through the ice and water, chopping the ice with his paddle as he went. 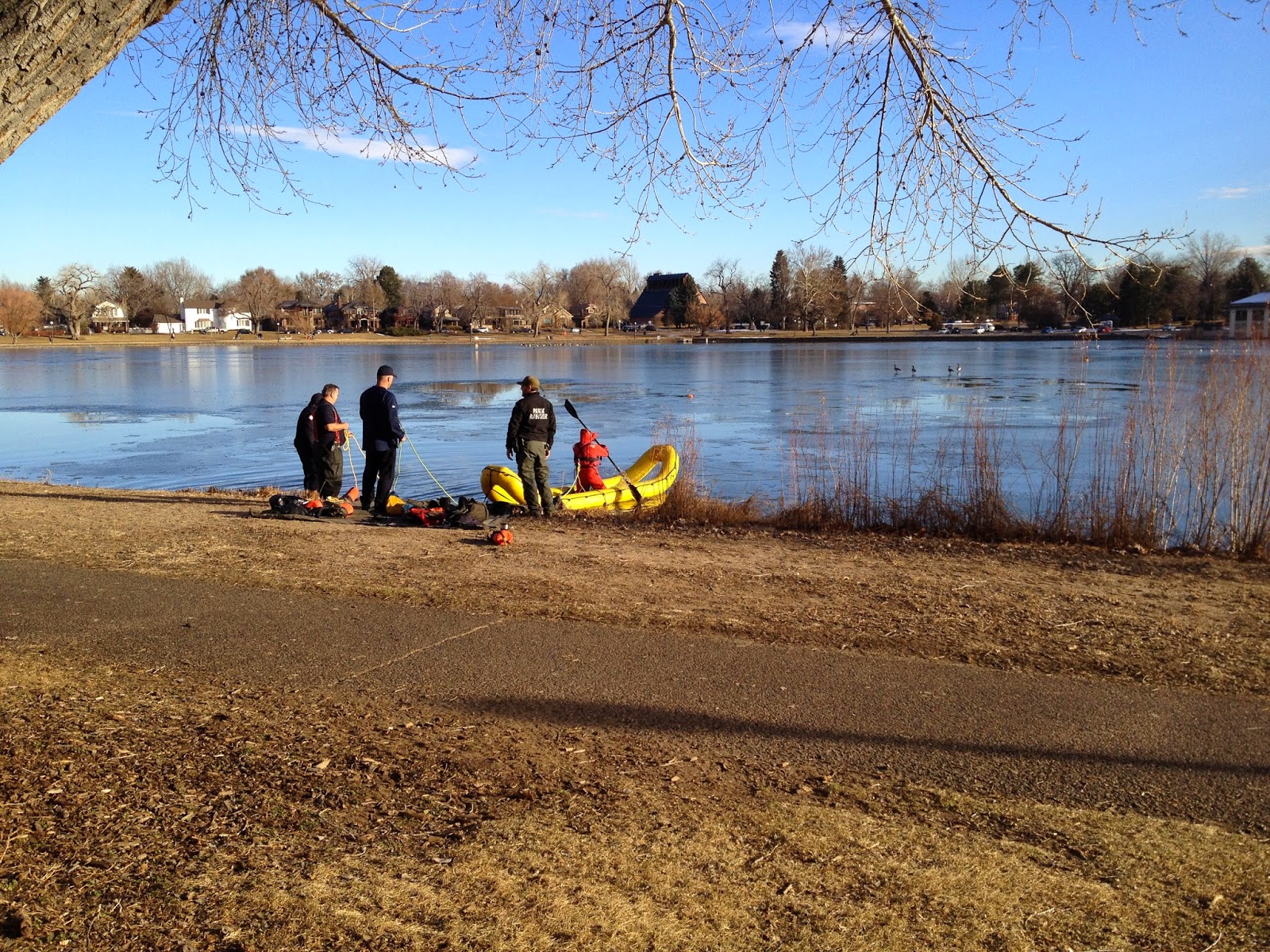 Max watched and directed as he got out there.  He takes these official duties very seriously, and he was sure to tell them exactly what needed to be done. 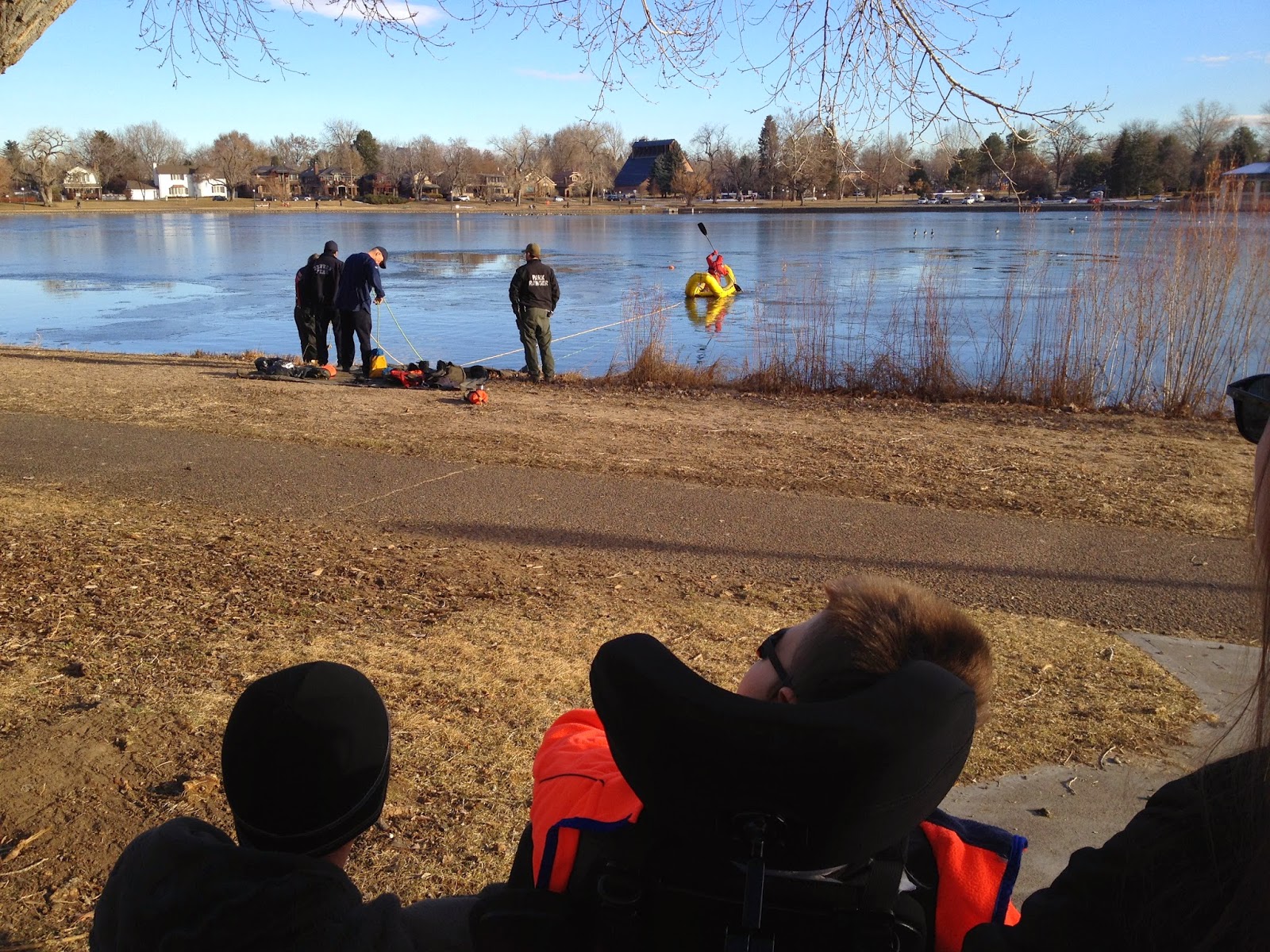 After he got the piece of the ice robot in his boat, the other firemen pulled him back to the shore.  The gathered all their gear up and took it back to the truck, all saying hello to Max as they went by. 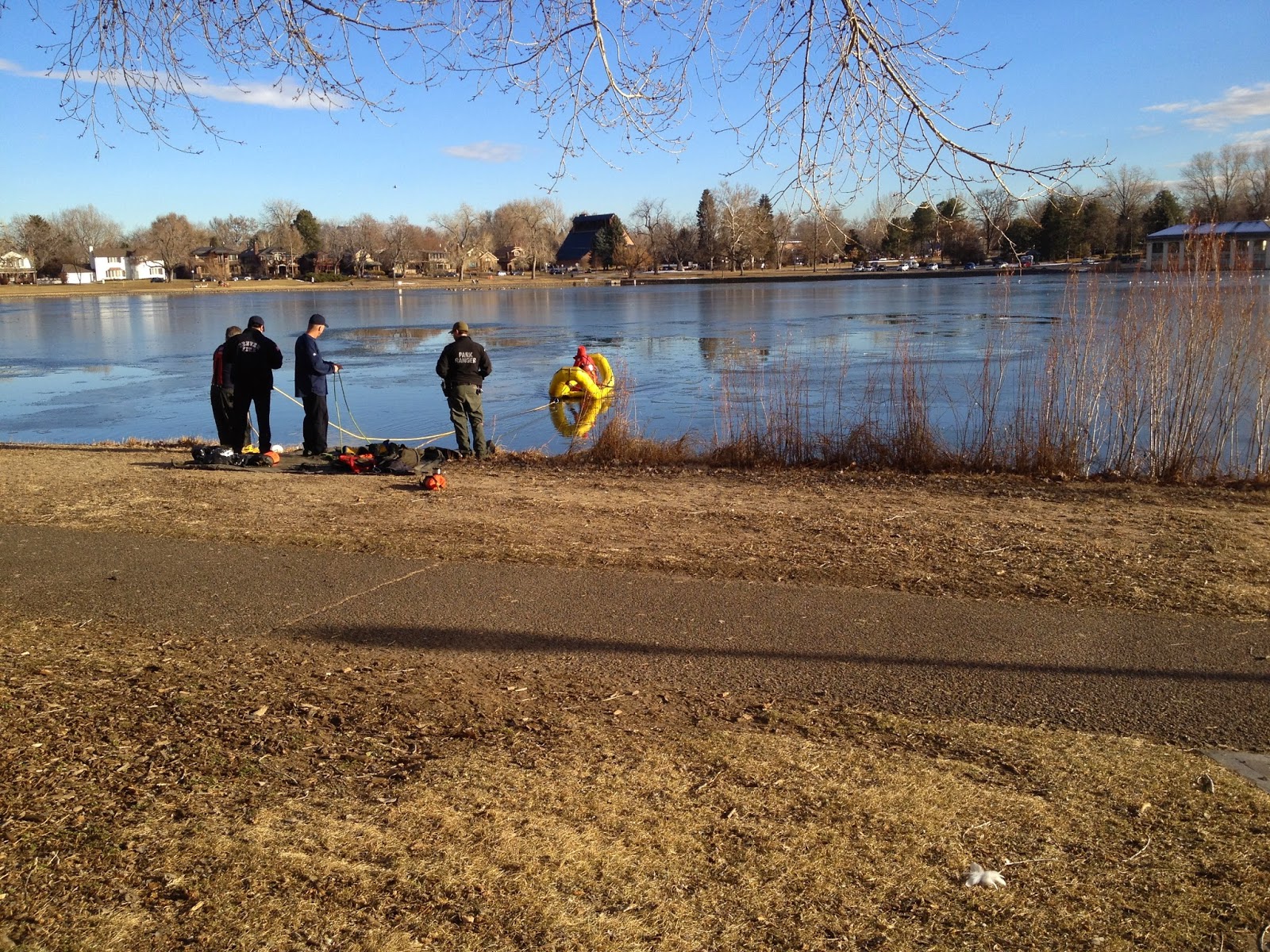 We had to get a picture of Max in front of the big firetruck so he could tell all his friends about the fun backstage experience he had at Washington Park, all thanks to Fireman Santa making it happen for him. 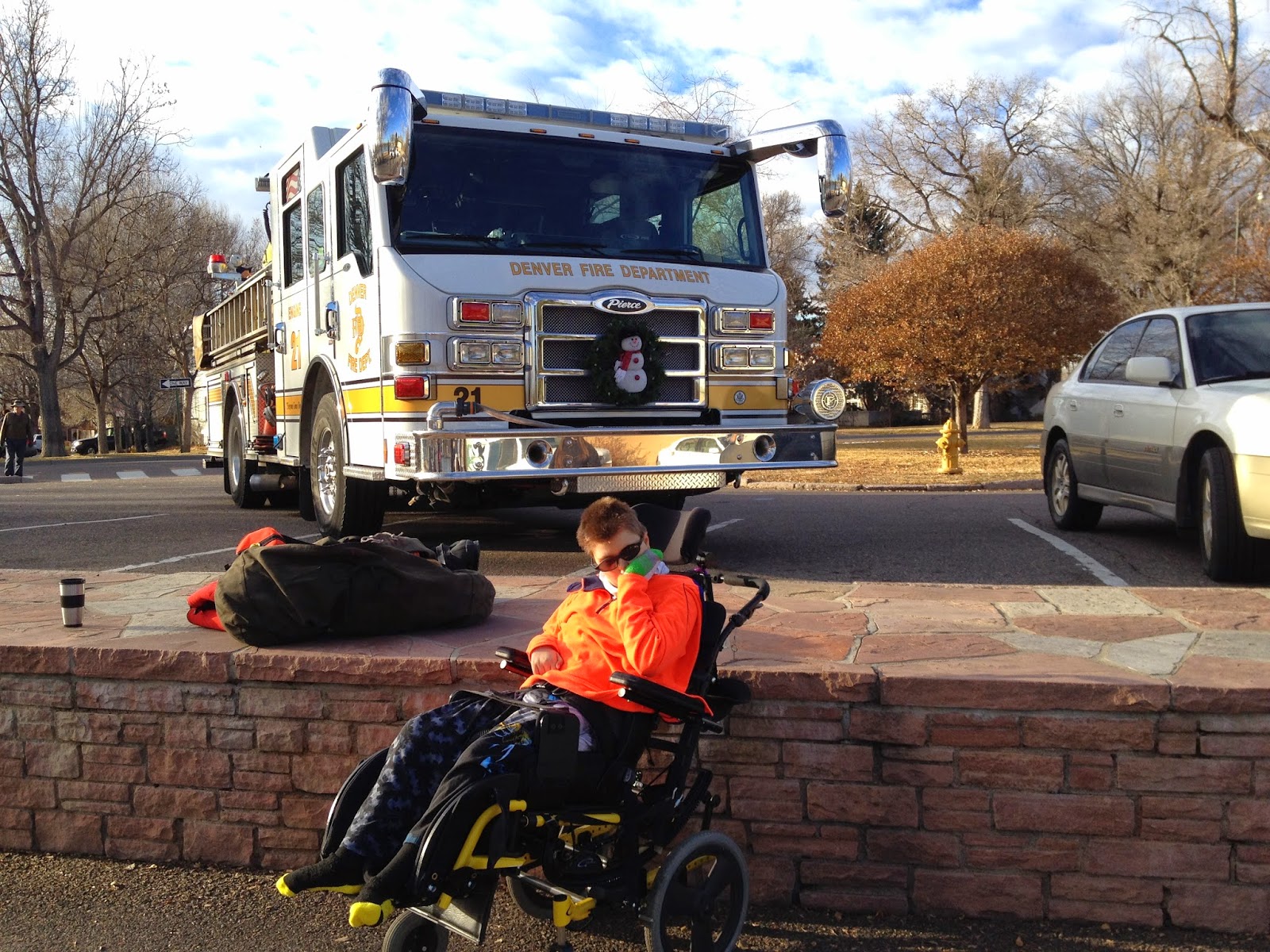 Of course, this was all complete happenstance that we got to see this, but it's unlikely we were going to make it to his park before Christmas besides today, and it really worked out perfectly.  Thank you Engine 21 for humoring us while we watched on.  You really did give Max a special experience.

After we left the park, Max wanted to go get a coffee at the train station downtown...really, he's turning into his daddy!  He waited patiently while the coffee was being made, then wanted to go over and get some ice cream too.  That was big sis's idea.  While we crossed the station, we noticed a certain jolly old elf was there taking pictures with people.  We rolled Max up for a photo with Santa since there wasn't a line and no kids around. But, Max wouldn't talk to him.  I think he was a little confused to just how this was Santa, since Santa always comes to his house with a whole group of firefighters.  We told him this was just a pretend Santa who takes pictures with kids for their parents to have, and of course the real Santa was the one who comes to his house for visits. I think he bought it, and it was fun to see a Santa while we were out today.  Especially since he got his special experience at the park from Fireman Santa. 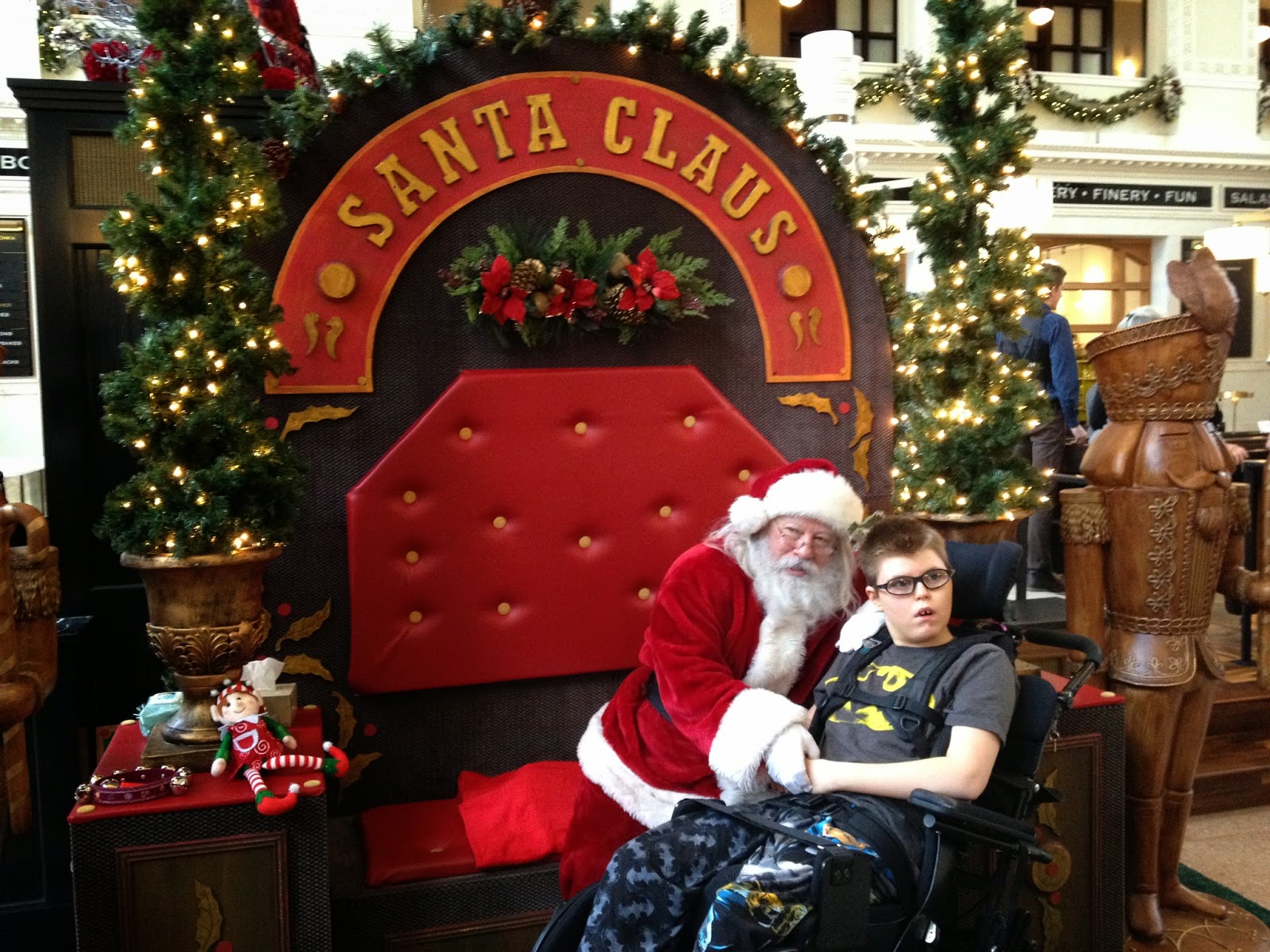 Max is ready for Christmas this week.  He's got all the presents he chose bought and will help me wrap them to put them under the tree.  I think we just need to get him out to see the Christmas lights and his Christmas will be set! Happy HO HO HO to you, until next time!
Posted by Deana at 10:28 PM