Back when Max didn't sleep too well at night, before the magical night-night medicine, he would sleep all through the day.

So when we were out and about, we would have to make sure his headrest was in place so if he konked out in the car, he wouldn't flop his head around while he slept.

Since he has been sleeping better, though, we haven't really needed the headrest...and I was actually thinking of passing it on to the next little friend who has trouble holding their head up.

Until Sunday, when Max had his whopper of a seizure. It really took his energy, and he was having an impossible time of holding his head up. In comes the headrest!

This morning, he had another seizure, it wasn't as bad, but still took the strength out of his head holding ability, so we had to use the headrest again. 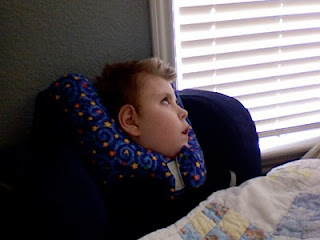 So, as it turns out, we have found a new use for an old piece of equipment. And I think this is exactly why I tend to hold on to everything for Max way past when we think he could use it.
Posted by Deana at 3:31 PM