Monday, a reporter was here taking photos for an article he’s doing on Santa’s Little Hackers of Max using his talker and playing with the adapted toys we have made him through the years.  Max was a good sport with the toys, but still enjoys some of the bigger kid things we've adapted for him like his CD player and party light.

Towards the end he asked about Max’s talker and how he used it, and Max got to work showing him.  He said, “This my talker. Give me a voice.”  Then looked up and me and Steve and smiled the biggest proudest grin and then to the reporter like, "see?". The reporter thought it was incredible, of course, but didn't know the whole back story of just how incredible it is that Max can use technology to communicate with us.  We were told Max may not live to be five months old, then 5 years old.  They stopped guessing around 10 when he was diagnosed with a newly discovered disease.  Now at 15 he is telling us what he can and can't do, instead of the doctors telling him what he can and can't do.

It was a short moment and not likely one that will make the story, but it’s the end result of why we started adapting toys for kids like Max.  Max started with a switch adapted giraffe that made the strangest noise and stiffly moved across his tray.  Monday, he told the reporter he was going to play him “best music opera”, before starting his CD player by himself.  Then he moved on to the toy that started it all for SLH, the Minion fart blaster.  He played a dice game with Daddy and told him, “Daddy you don’t know game.” when Daddy didn’t let Max win.  Max finally settled on his disco light which is still one of his favorites.  He told us after the reporter left, “when mine own house, lights every room!” He’s been big on designing and planning his own house lately and naturally he wants a disco light in every room! This is independence in playing and communication!

He continues daily to enlighten us with his incredible mind. 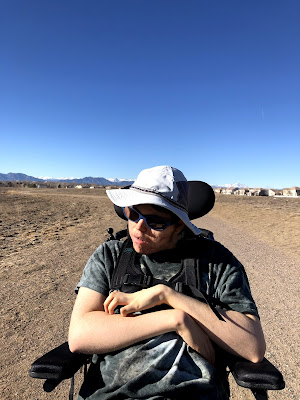