In school today, Max told me "look at me." I was on my phone texting Steve and when I told him I was talking to Daddy he said "why can't I?"  I told him if he would tell me what he wanted to say to Daddy I would help him text Daddy from his iPad.  I blurred out some about location and time, but you can get the idea.

(The panda was sticking his tongue out and laughing.  Max chose it out of all the Kung-Fu Panda choices) 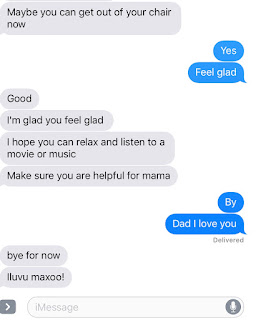 He read a book about Abraham Lincoln, and didn't feel like doing much else...and was insistent on telling his teacher how everything she offered was boring.  This is his difficult week with his mood. He will get another injection on Friday of the testosterone and his mood will be better.  And even though he didn't want to do what his teacher had planned, he did a good job of telling her why instead of just crying and throwing a fit.

Steve was trying to get him to be helpful for me, because he spent most of his school time asking about Daddy.  His teacher was great in turning his attention from being sad and missing Daddy to asking Max what he thinks Daddy does when he goes to work.  He answered dad goes out of the house works with officers and he thinks it stinks.  Pretty much how it goes.

**I'm posting this a few days late because I don't post when Steve is out of town.  Now he's back and Max is happy again.