Before school today, Max told us he was excited to read the book he and his teacher are reading.  We assumed this meant he was not looking to do much work, but was hoping to listen to the story that has caught his attention.

When his teacher got here, it took him his usual fifteen minutes to get warmed up and then he was off like a shot talking with his computer. His first order of business was to tell us, "Mom, I need help. Please support my hand." Max has been asking for support under his hand when he uses his talker. This is a new thing, and one that ties me to his side any time he's using his device.  That said, he's faster than he's ever been, and saying more than he's ever said so we're trying to figure out how we can replicate it without it being me, his teacher or his speech therapist at his side.  I think a lot of it has to do with getting all the attention focused on what he's saying.  He will talk without me holding his hand, in fact he will use his device when I'm out of the room.  But when he really, really wants to get a point across, it's "Please support my hand."

Today's discussion with Max was one to put on the blog because it was so incredibly thought through. We all stood amazed at his ability to communicate in such an effective way.

He started by calling his dad into the school room. "Dad I need something. I need to be held."  He will often ask for his dad to come in and break up the work of school.  Steve told him he was working and Max needed to work and then they would play after school.  Steve went back into the other room and I started Max's food.  He told me "just breakfast" meaning it was too early to eat, he had just had breakfast.  It had been a couple of hours and was time to eat so I told him to tell me if it bothered him and I would stop it.

His teacher started reading at this point and he got to work on forming his thoughts to make us all stop and listen to what he had to say.

"Go with ocean able to take my father."  Okaaaaay....where is he going with this?  "Was a long and she had never come back with her ocean" 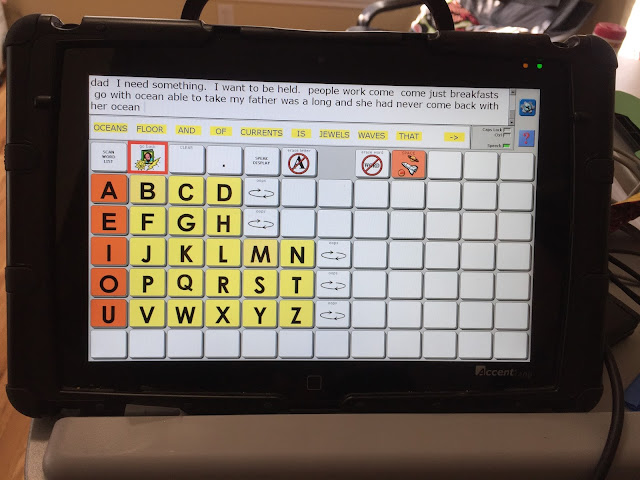 Oh boy.  We have been trying keep the talk of Steve going to visit Abbey to a minimum but he caught on and wanted to be a stowaway.   "Go with ocean able to take my father." - translated means I CAN go with Daddy to the ocean. 'Able' always is an argument to us that he can do it and he thinks we think he can't.

"Was a long and she had never come back with her ocean" - translated means Abbey is far away at the ocean and he wants Steve to bring her back.  We started immediately trying to tell him he wouldn't be able to go with Daddy on this trip and Abbey has to work at her new job so she won't be able to come back home this time. Silly Mommy and Daddy...let me try again.

"My west dad let's go somewhere Where do you want to take me?" - translated is pretty easy to understand.  He wanted Steve to take him west with him, but gave him the opportunity to get it right this time. 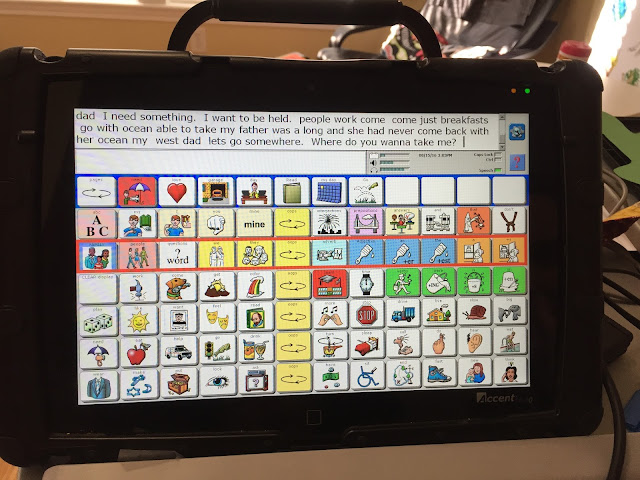 He didn't wait for the answer from Steve, but told him where he was needing him to take him: "Abbey." 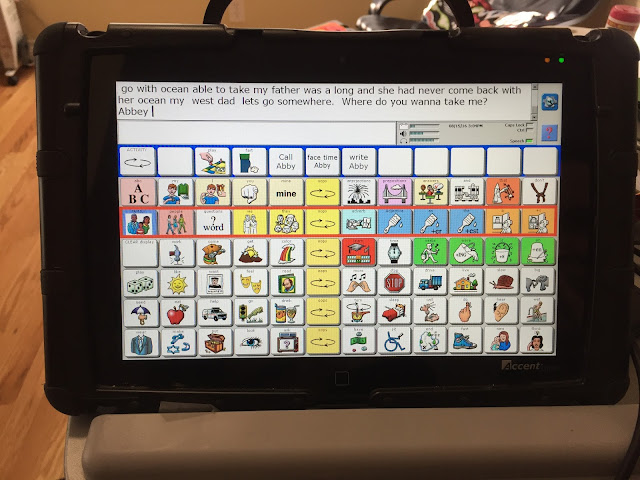 More explaining of how it wouldn't work out  this time.   And more pleading from Max. "need I want" 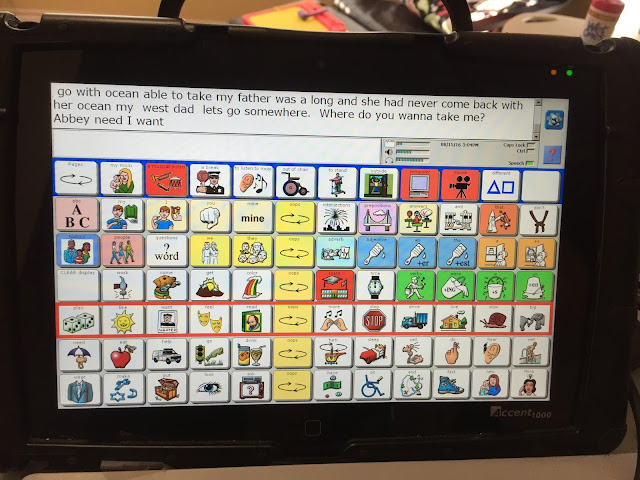 We explained that it was just too long of a trip, and we would have to plan it out just like when we went to California.  It took a lot of planning.  Not to be deterred, our problem solver had the best idea. "help my dad drive" 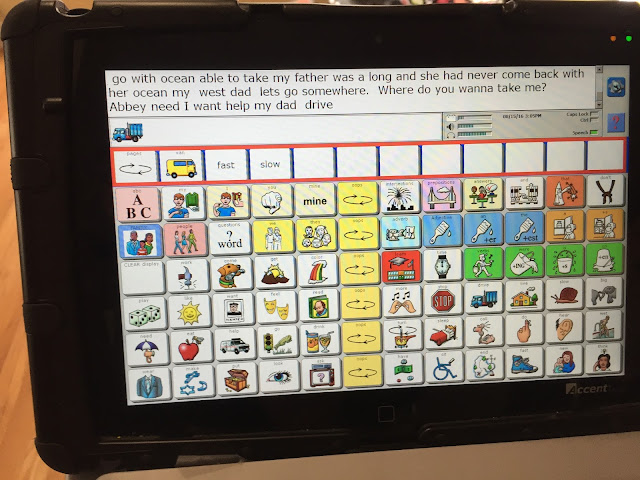 We told him we couldn't drive, it was too long of a trip, and there was the small issue of there being an ocean between us and Abbey. 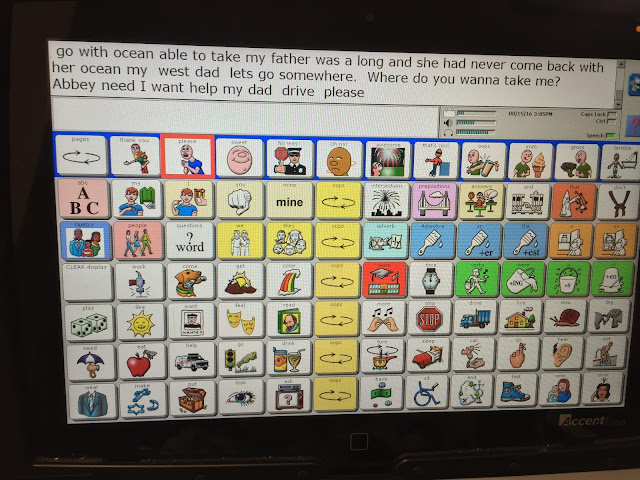 We were running out of explanations at this point.  We hate telling Max he can't do something.  When it comes to obstacles for Max, we find a way or we make one.  That's just who we are.  But, this one is hard.  We have no idea how we will ever get Max to see big sis where she is now.  So the more we explained it just wasn't going to happen, then more he tried to convince us otherwise.

I'm sure we were giving some reason around it when he stopped us and said "OH NO!" which comes out with the most inflection his talker can spit out.  It's loud and high and gets our attention.  Then he said "go with you." 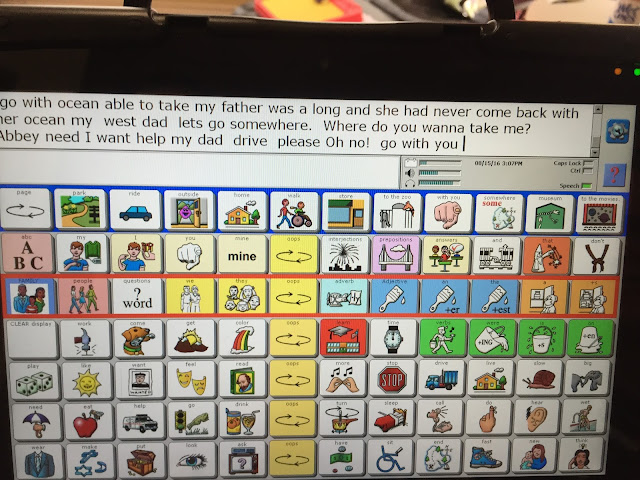 Then the final blow - "it stinks."  We told him we completely agree that it stinks, and we will keep trying to find a way to get him to see Abbey.  Just not this time. 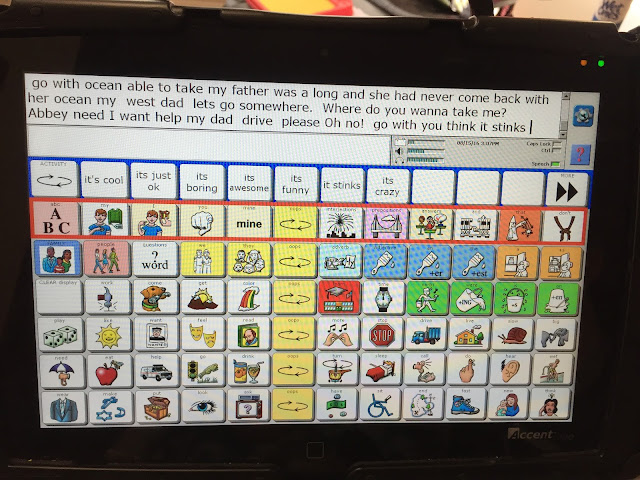 Then a special jab to let us know what he thinks of staying home with mom while dad and sis play - "it's boring." 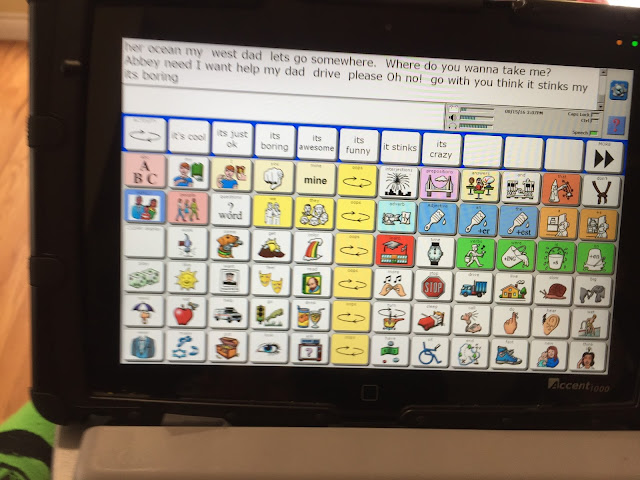 Again, we agreed with him and told him we would try to figure out a way for him to have a special trip again.  He told us he was going into his adjectives to describe it.  Then he told us we were "mean."  And then switched gears to say to his teacher "old woman easy today." 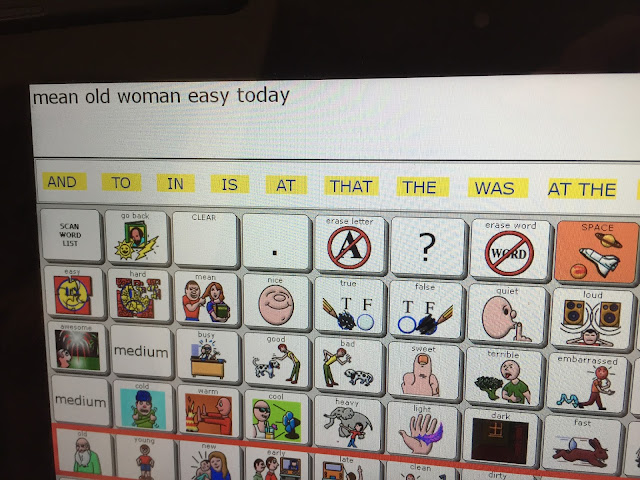 Now listen, his teacher is a real good sport because she had tears rolling down her face laughing at this guy.  He had just poured his heart out trying to convince us to get him on an airplane or drive across the ocean just so he could see his sister.  When he didn't get his way, he just wanted her to know that he wasn't up for school anymore he wanted to take it easy.  He knows her name and calls her by name every day in school.  So why he went the route of calling his teacher an old woman wasn't immediately understood, but as soon as he said it, he smirked and we were all laughing.

Then he tied it up by making sure she knew it was funny and a joke. 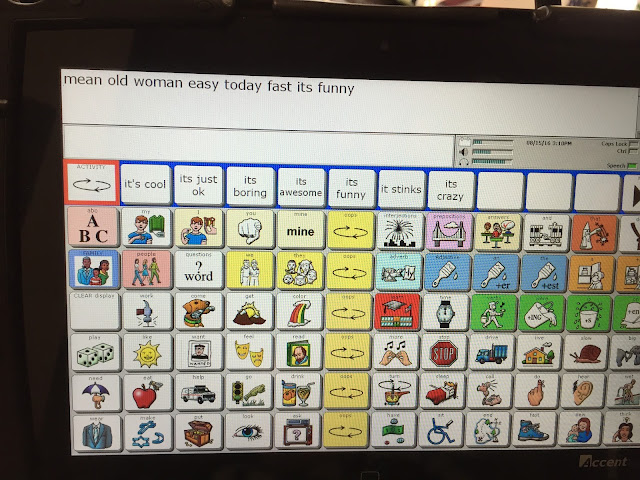 The pictures stopped after this, but he said, "Mary, I want to go somewhere I want to go for a walk." He said this several times after telling her he was not up for school today.  And they made a deal that he could go on a walk and when we got back they would read some of their book together and learn a little more about MLK. He was good with that and off we went to take him on his walk with his teacher.

Some days when he's fussing and frustrated, it's easy to get frustrated along with him when I don't understand what he wants to tell me.  When he has days like this where he tells us everything on his mind, I can't help but feel even more frustrated for him that he has so much inside he wants to get out. I hope he's will continue to tell us all the things stuck in his beautiful mind.
Posted by Deana at 12:26 AM