I have a question...


Max and his homebound teacher just finished A Long Walk To Water.  It is the story of one of the Lost Boys of Sudan who came to America, but made it his life's work to provide safe water for his home country.

Max really enjoyed the story of Salva and how he helped his people.  He told his teacher he liked the book and it was interesting.

On Tuesday night Max stayed up ALL NIGHT! I thought for sure he was going to be sound asleep for school.  But as it turned out, it was his best day in school so far this year.

His teacher had worked on setting up some choices in one of his communication apps for the ipad, ChooseIt Maker.  It allows for Max to put some thoughts together, but they are not his own original thoughts, it's more like multiple choice. 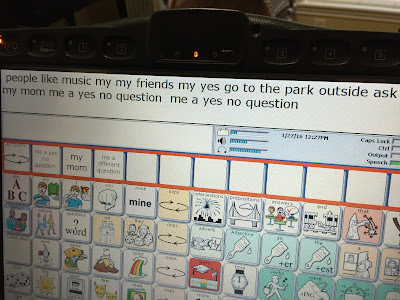 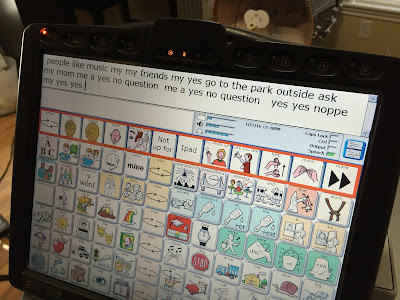 He answers, yes and noppe - we have to phonetically spell some of his words so the computer will say them out loud correctly.

After he answered her questions, she asked if he was ready to use the ipad app, and he said "I'm not up for this right now." "I feel pain. My Back hurts." So it was time to move on from answering questions and help him get repositioned. 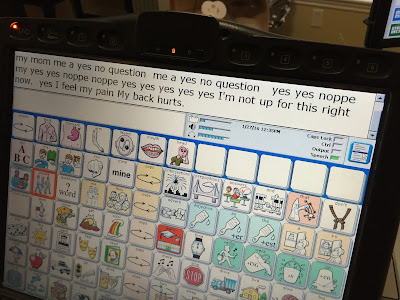 What he moved on to was so great, because his speech therapists have been working with him a lot on trying to get him to ask questions, rather than playing 20 questions to figure out what he's trying to say.  He asked his teacher, "Can I ask you something? What you people." 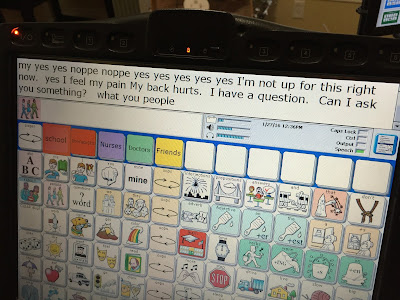 We were talking about him meeting his new teacher - since there was a new SSN teacher starting mid-year who needed to meet him.  He was asking what people? Then he asked,  Mr Johnson? Who was his teacher last year.  I told him no it wasn't Mr. Johnson.  Then he said My Debbie.  That's his homebound teacher's name. 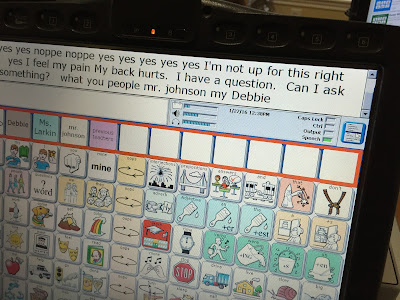 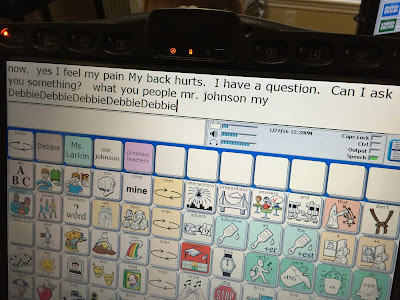 Debbie asked him if he had any questions he would like to ask one of the lost boys of Sudan after reading the book.  He said "I want to turn on some music! people I have a question. Can I ask you something? people"  All of this was leading up to, and prompting us, the listeners, that he was giving us context for what he was going to talk about. 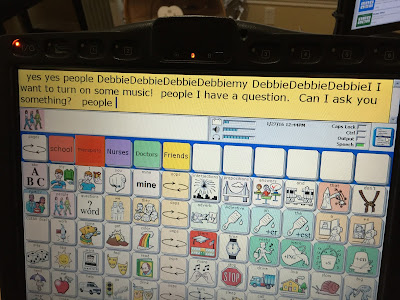 Once we figured that out, he was on to asking what a lost boy would eat, and does he like pizza, pizza, tacos, pizza, tacos, pizza.  And then he has to always add in he likes his friends - in this context, that's classmates some he knows and some he doesn't because he's had such infrequent contact with them this year.  He said he wanted to ask his friends if they like pizza too - a great question to ask new friends!  For a kid who doesn't eat anything by mouth, he certainly likes pizza! 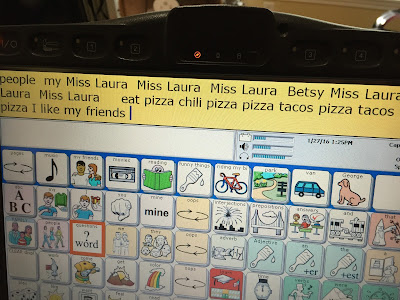 His teacher was feverishly writing down Mr. Jabberwokie's stream of consciousness and he wanted to make sure she was listening when he asked "I have a question. Can I ask you something? work what people Debbie Debbie Debbie"
The context here is he wanted to know what the lost boy does for work. 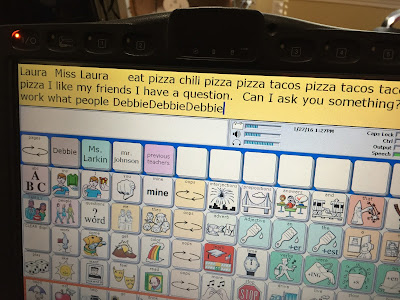 His teacher asked if he was finished with his questions, and happy with them.  He answered yes yes yes.  Then gets in to his Santa Claus words and says "I've been great this year play"  Which cracked me up.  I told him he absolutely had been great, and I'll make sure Santa knows.  I think after this he asked what games they like to play, but I didn't get a picture of that.  He watched a video of the lost boys of Sudan singing and playing a game, then asked after about "play a game". 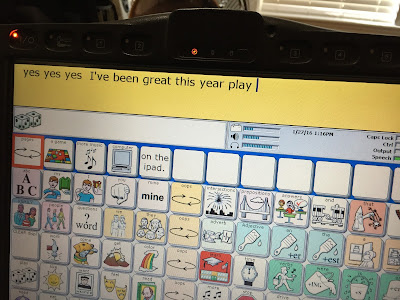 For a boy who had been up all day the day before, and all night he really surprised me with his school work that day.  I was SO surprised!  Not that he is so smart...I already know that! It's that he had any energy at all to not only do school work and do it so well, but he had music before and art after.  He did great in all three.

At the end of their time he told Debbie Debbie Debbie - "work I want like"  He loves to do work. And he hasn't had a lot of it to do this school year, as not a lot has been sent home to him.  We're hoping a change for the better will be coming with the new SSN teacher to help facilitate that. 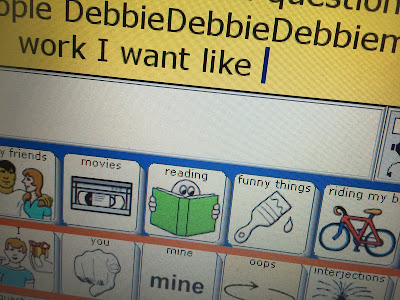 He loves it when he is able not only to communicate, but he knows the listener understands him and acknowledges that he knows what he's talking about.  It can take an effort to learn Max's way of talking, but when he lets you in to his beautiful mind it's such a special treat.
Posted by Deana at 10:42 PM