Max has taken his sweet time getting a letter to Santa this year!  It makes for some scurrying by the big man when Max waits so long to tell him what he wants, but hopefully he will be able to deliver on Christmas morning.  He worked with his new speech therapist, Robby to write it up. 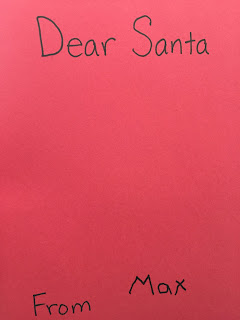 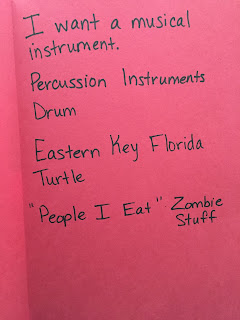 Max must know Santa will be stopping by the Florida Keys at some point Christmas Eve and wants him to bring a sea turtle in Colorado.  We've reminded Max that sea turtles can't live in Colorado, so maybe he will find him something special that reminds him of turtles.

Ans the "People I Eat" cracked us all up.  "Zombie stuff" isn't in his talker, so he came up with a way to communicate he wanted zombie things.  Such a clever boy!