I don't know that I have ever skipped blogging ON Max's birthday.  Maybe I have, but certainly not days after his birthday has passed.  Maybe that's just where we are this year.  Life is just rolling along.  I posted some pictures on his Facebook page with his costume, and what we did, but since this is his memory book, I need to do a proper post here before I forget all the details.

Max woke up happy it was his birthday, and ready to put on his costume.  He decided a while ago he would be Officer BatMax.  I had to ask him what that would look like and he told me his officer hat, and bat ears, Batman shirt, officer badge, Batman socks and Batman cape. 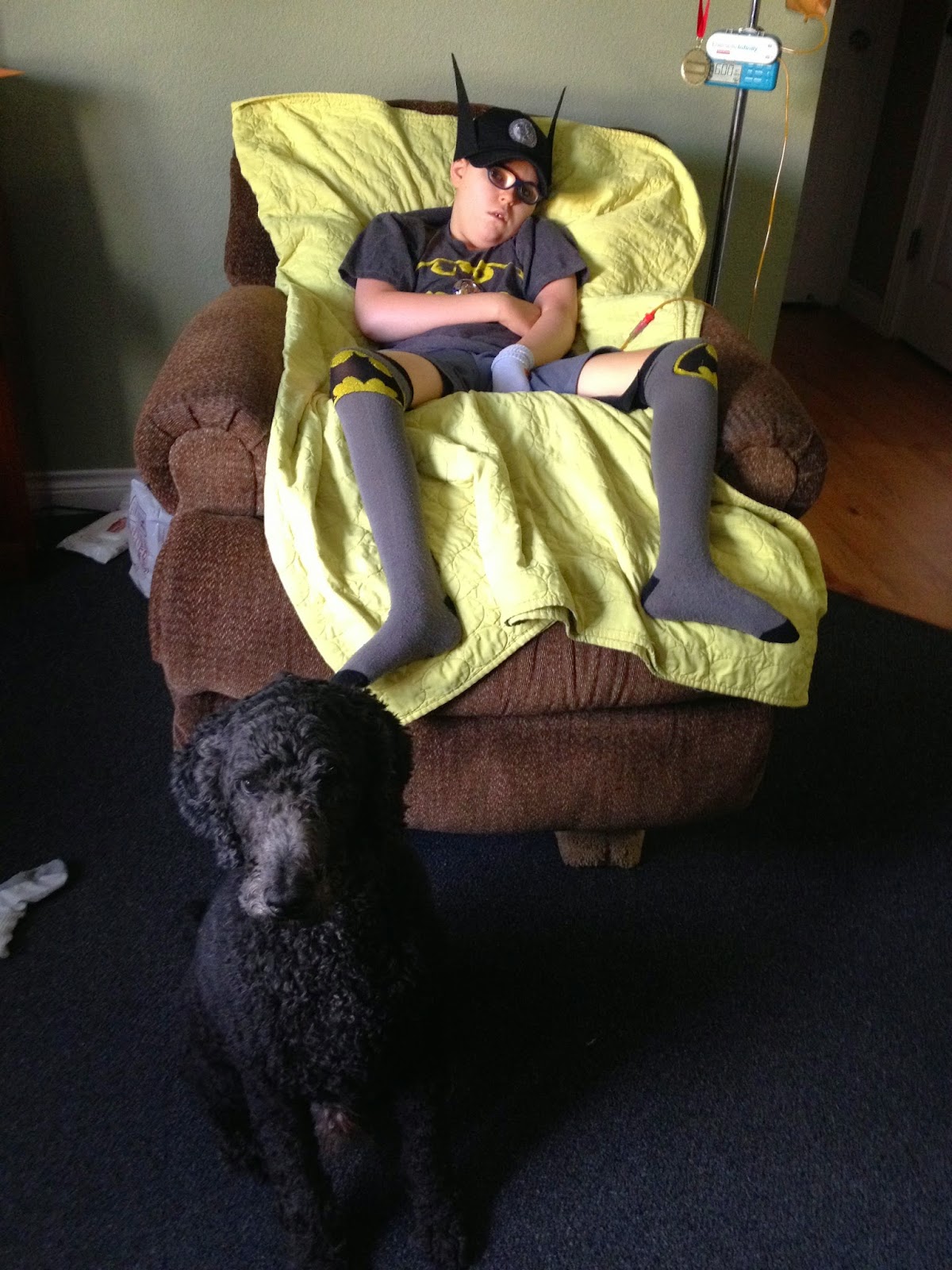 Once up, however, he was in no mood for a photo shoot. 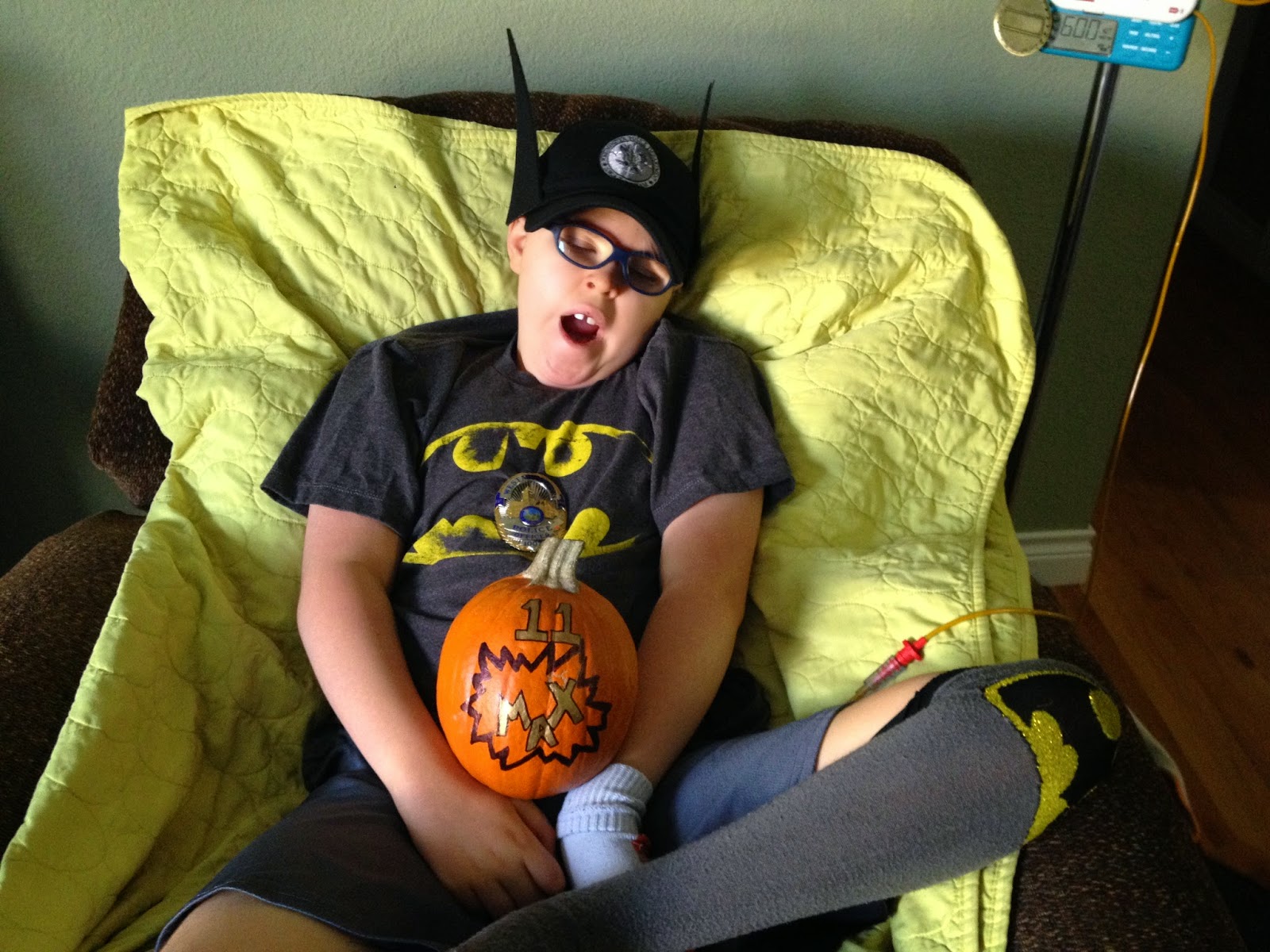 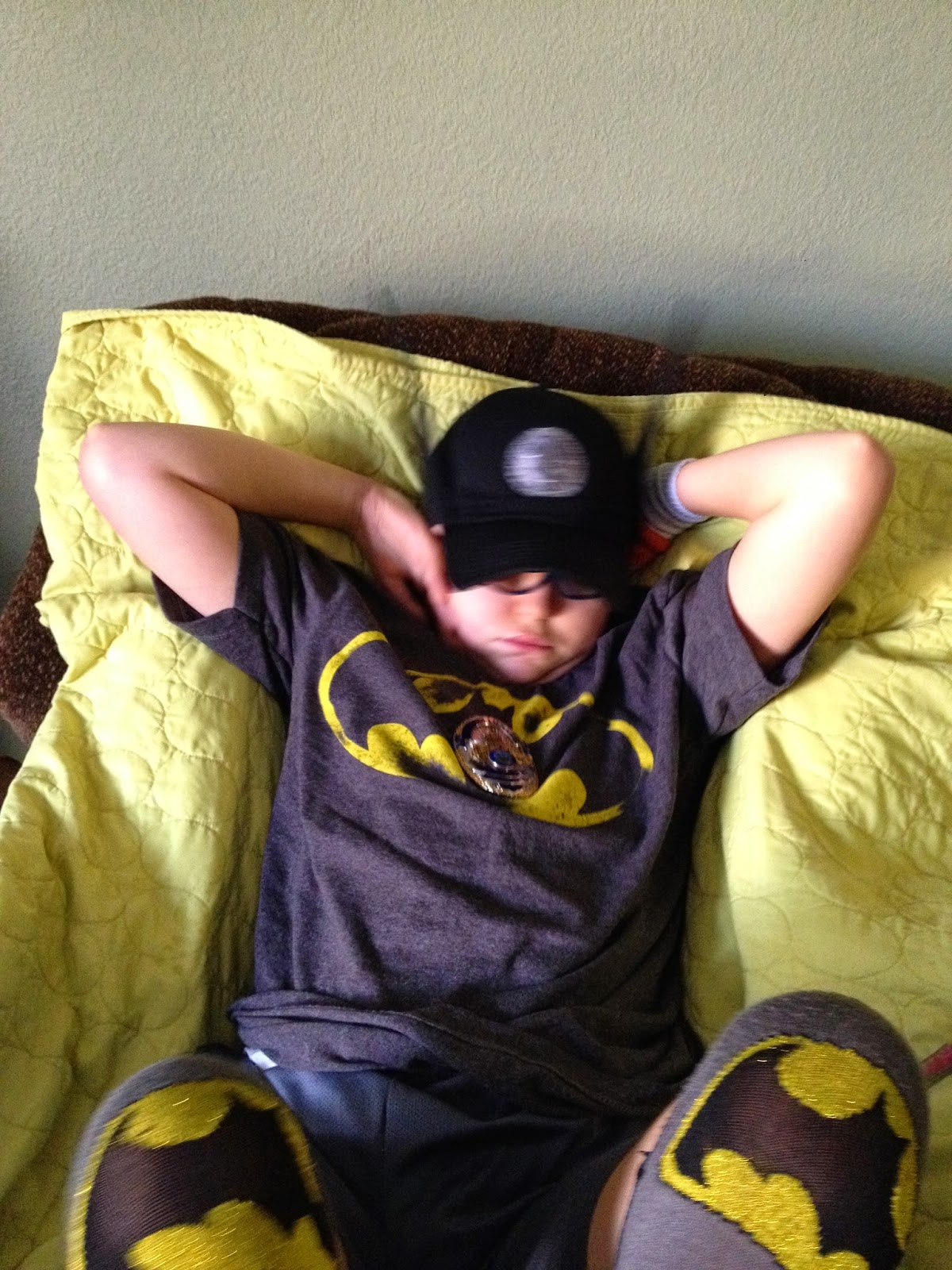 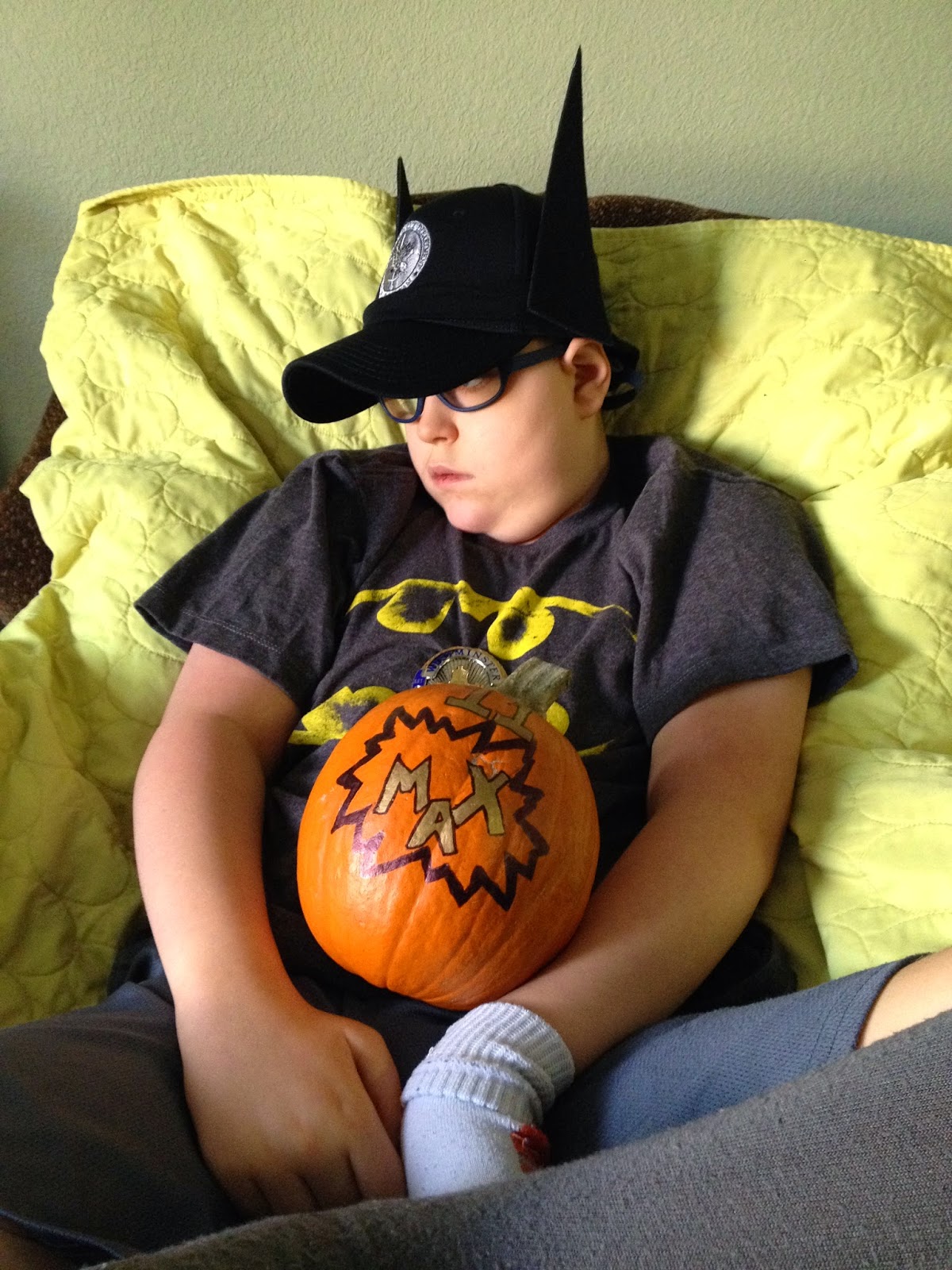 He visited with his classmates for a bit over video chat, and let them know he would be coming in for the class party after he had his school time with his teacher at home.


His teacher had a fun game for him to play along with a spooky book she read.  She put different food items in bowls and had him touch them...the olives were "eyeballs."  He thought that was funny and he told us he liked it. 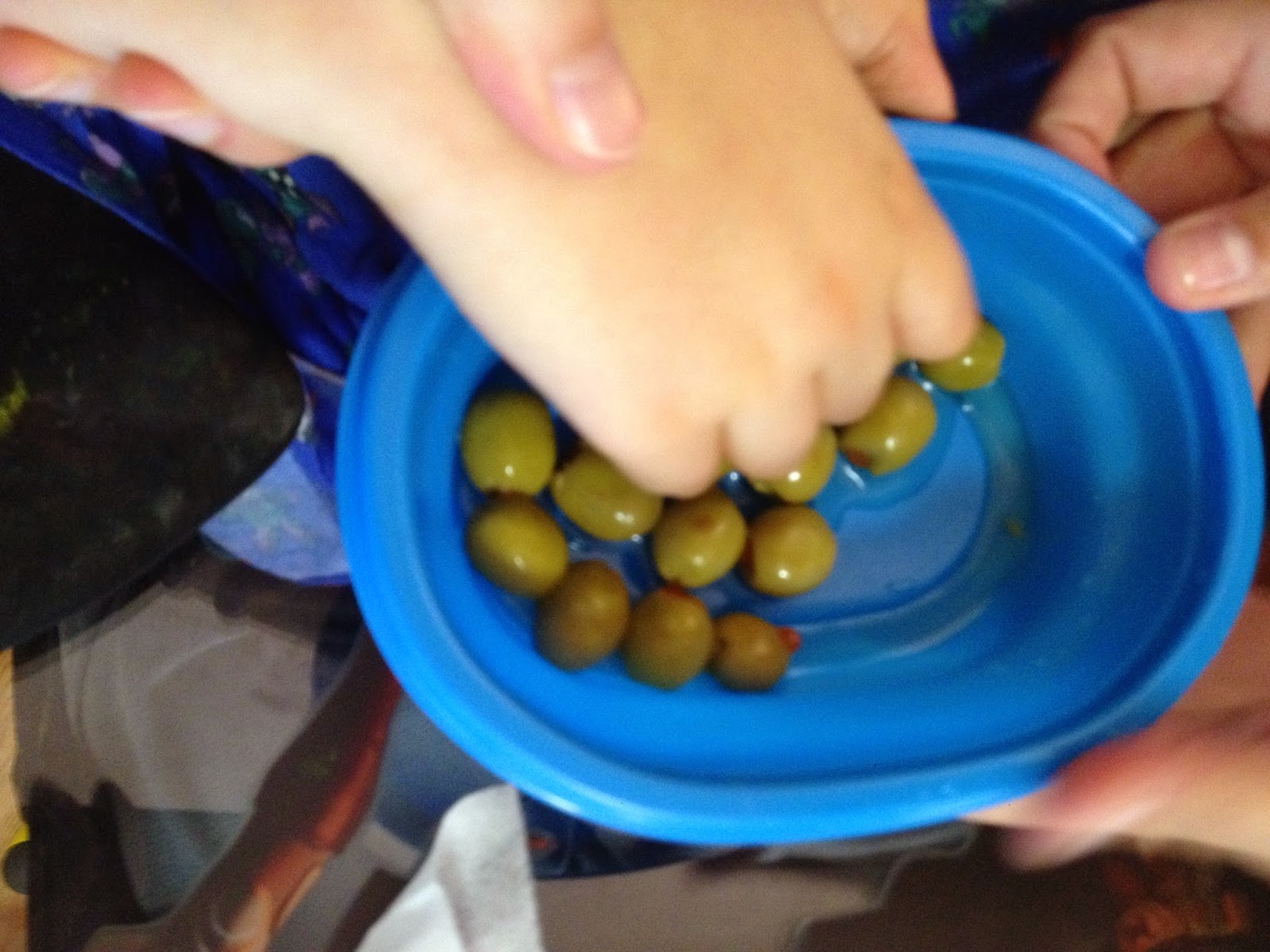 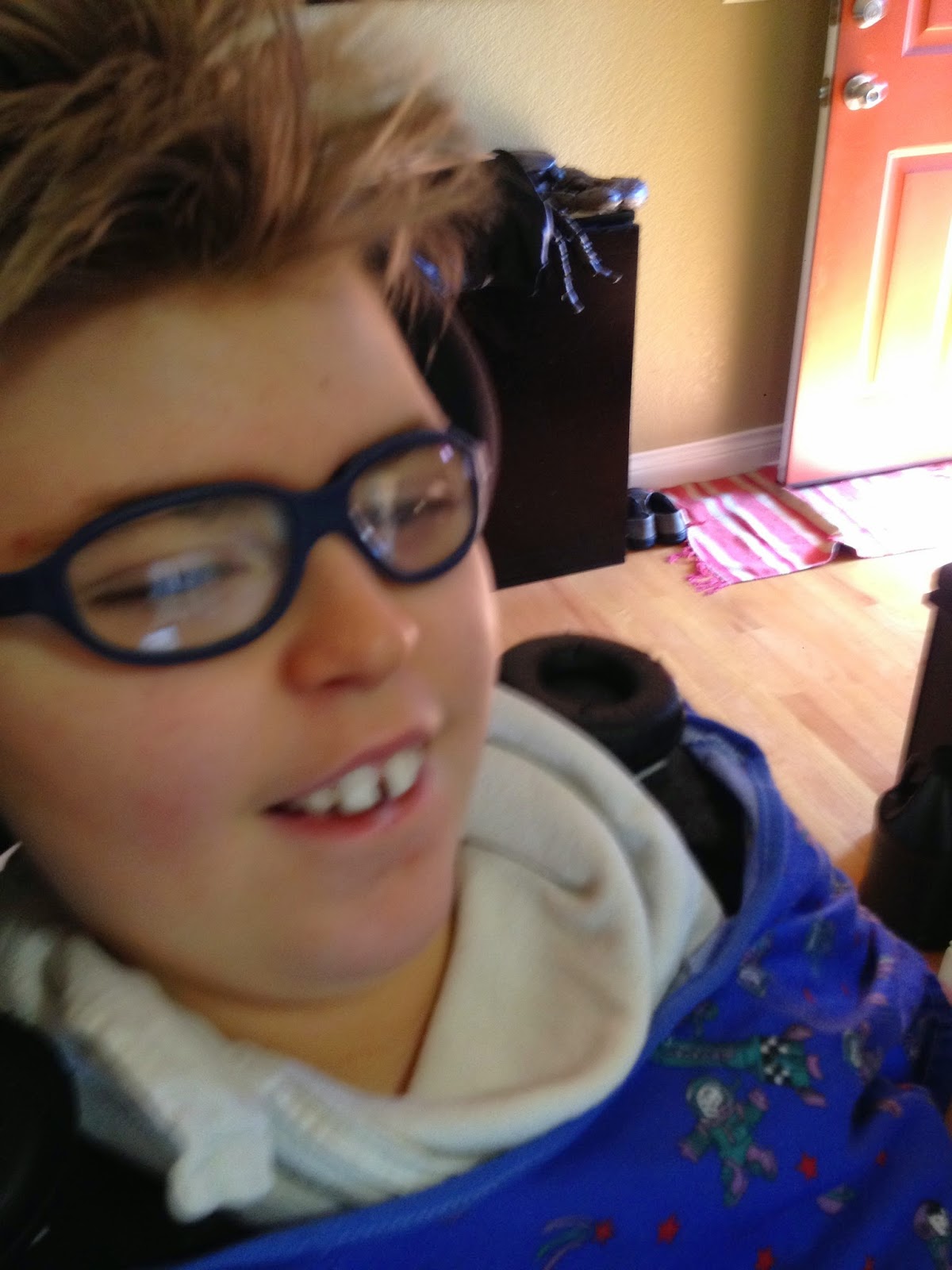 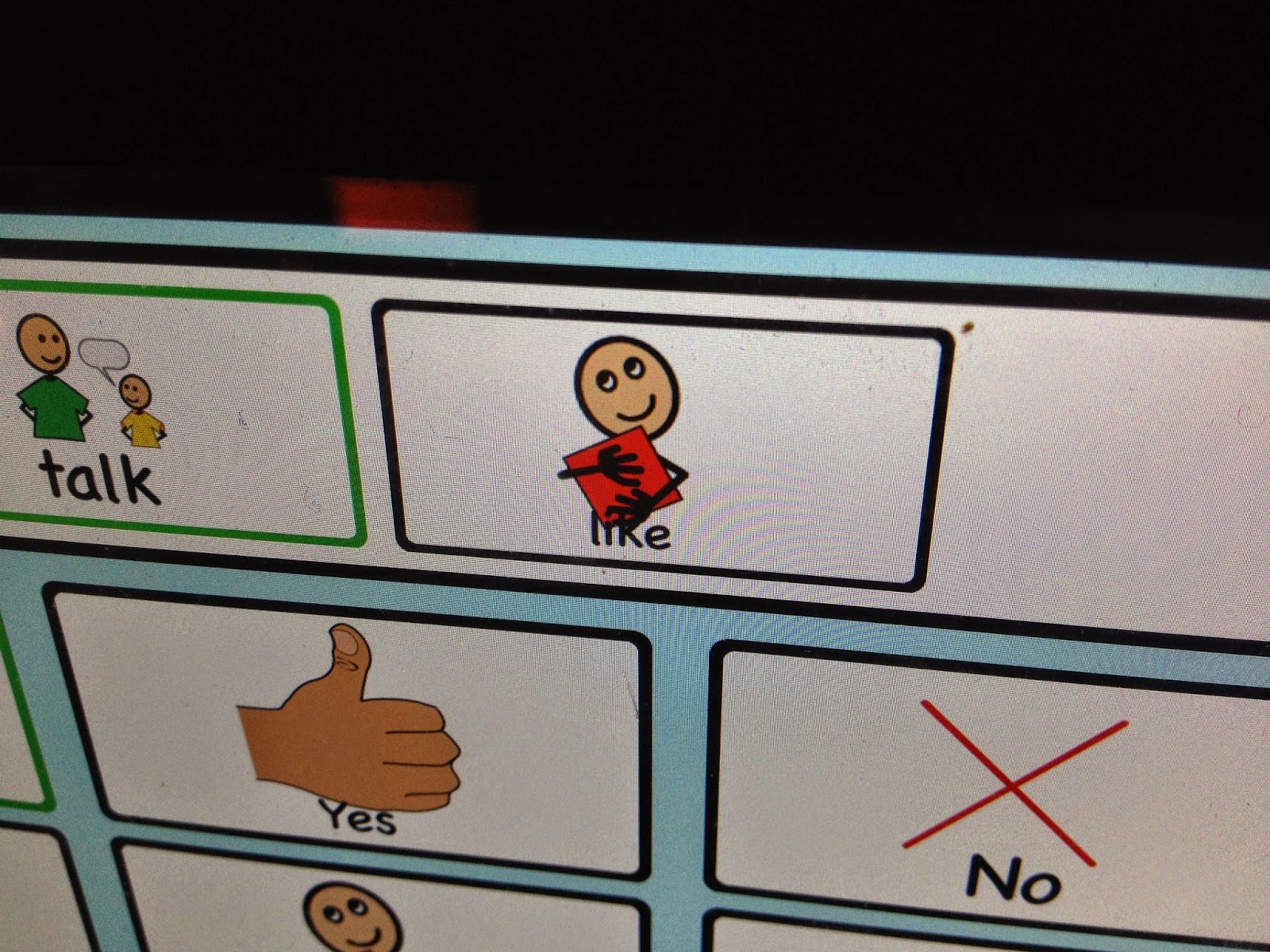 We dropped in to the school for the Halloween party with his class.  It was wild and crazy fun, but hard for Max to get into it.  We stayed for a bit, then on our way out saw a few teachers and some of his friends. 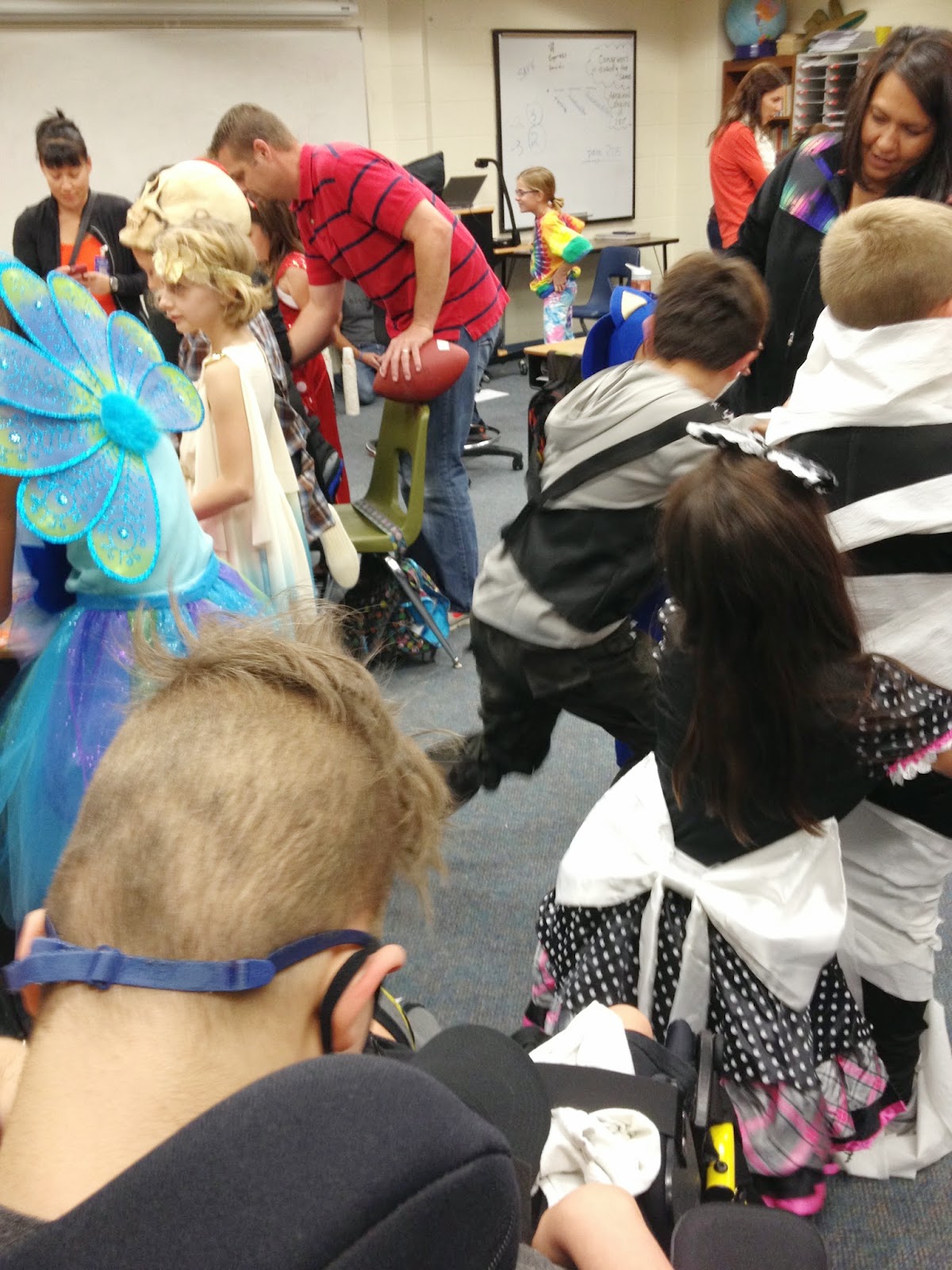 Max really just wanted to do one thing on his birthday, go to his park.  It was a beautiful day, and the park was pretty empty...naturally, he had it all to himself.  We stopped to take a few photos by the pond and yellow trees.  His hair is just out of this world this year.  He loves it being so crazy. 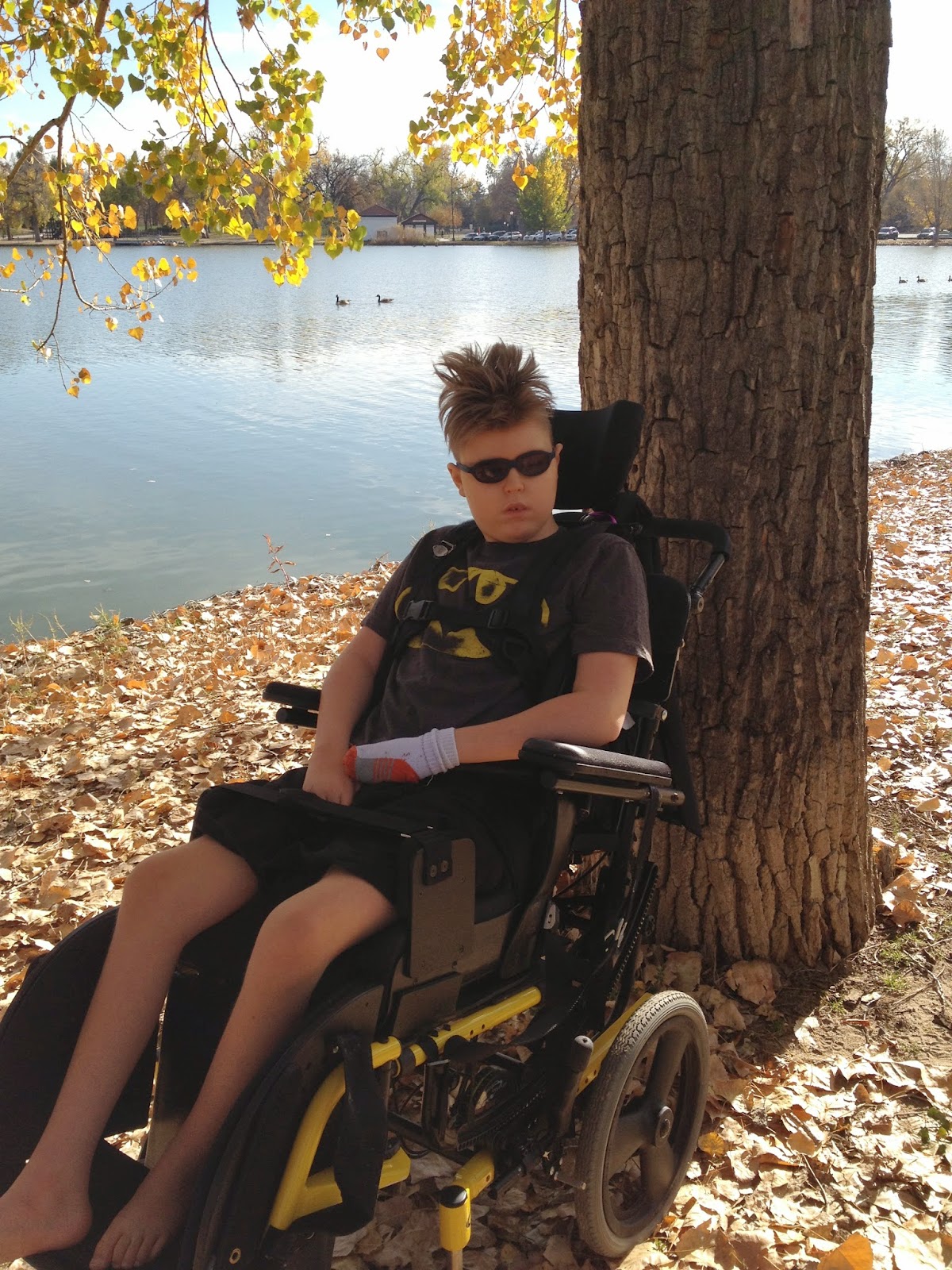 After the park, we came home and started getting ready for trick or treaters.  Max was happy to take it easy, and only wanted to watch Batman movies.  He didn't want me to make a cake or any other dessert...he just wanted to watch Batman.  He couldn't even be bothered with us dressing up and acting silly. 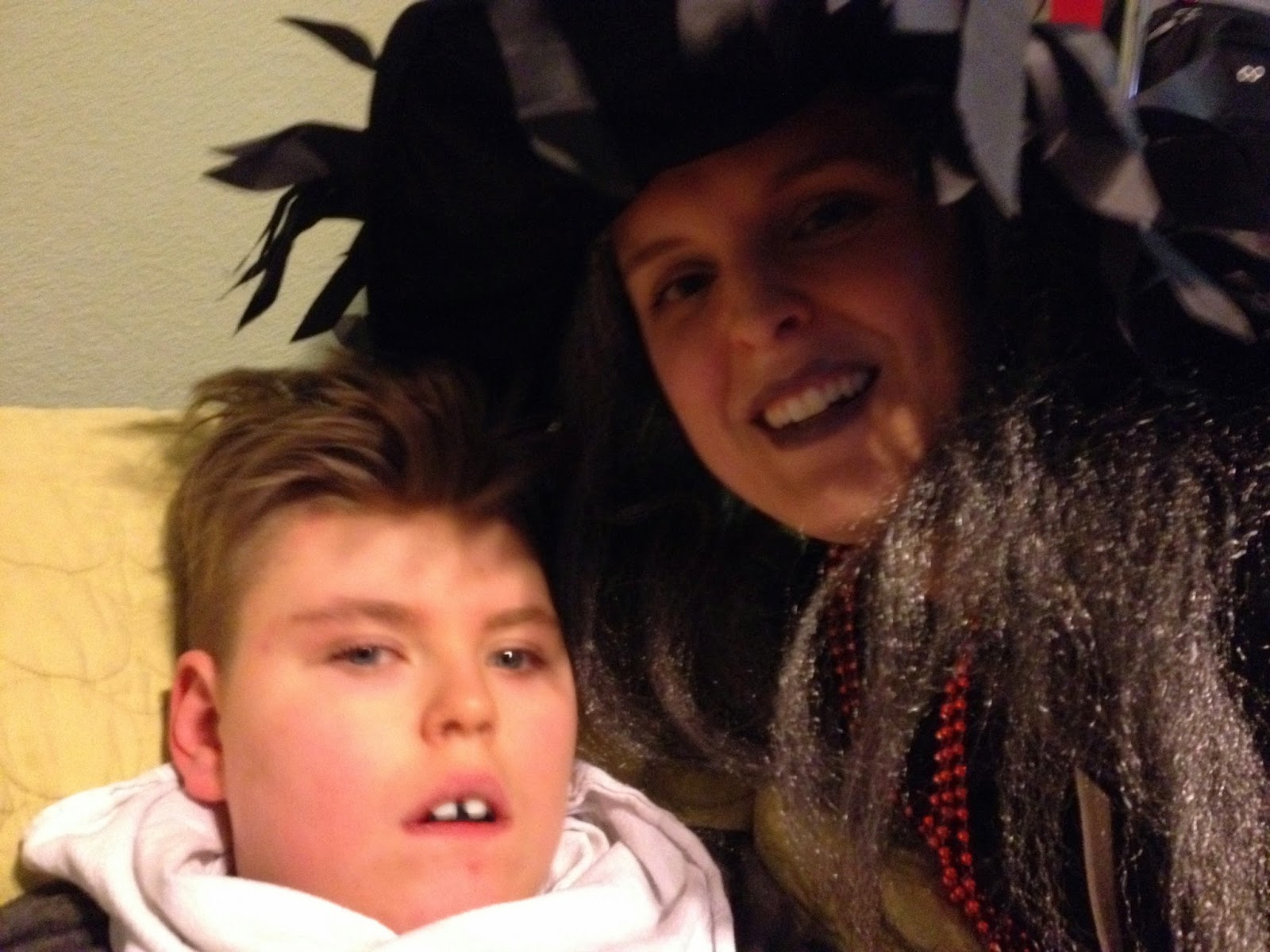 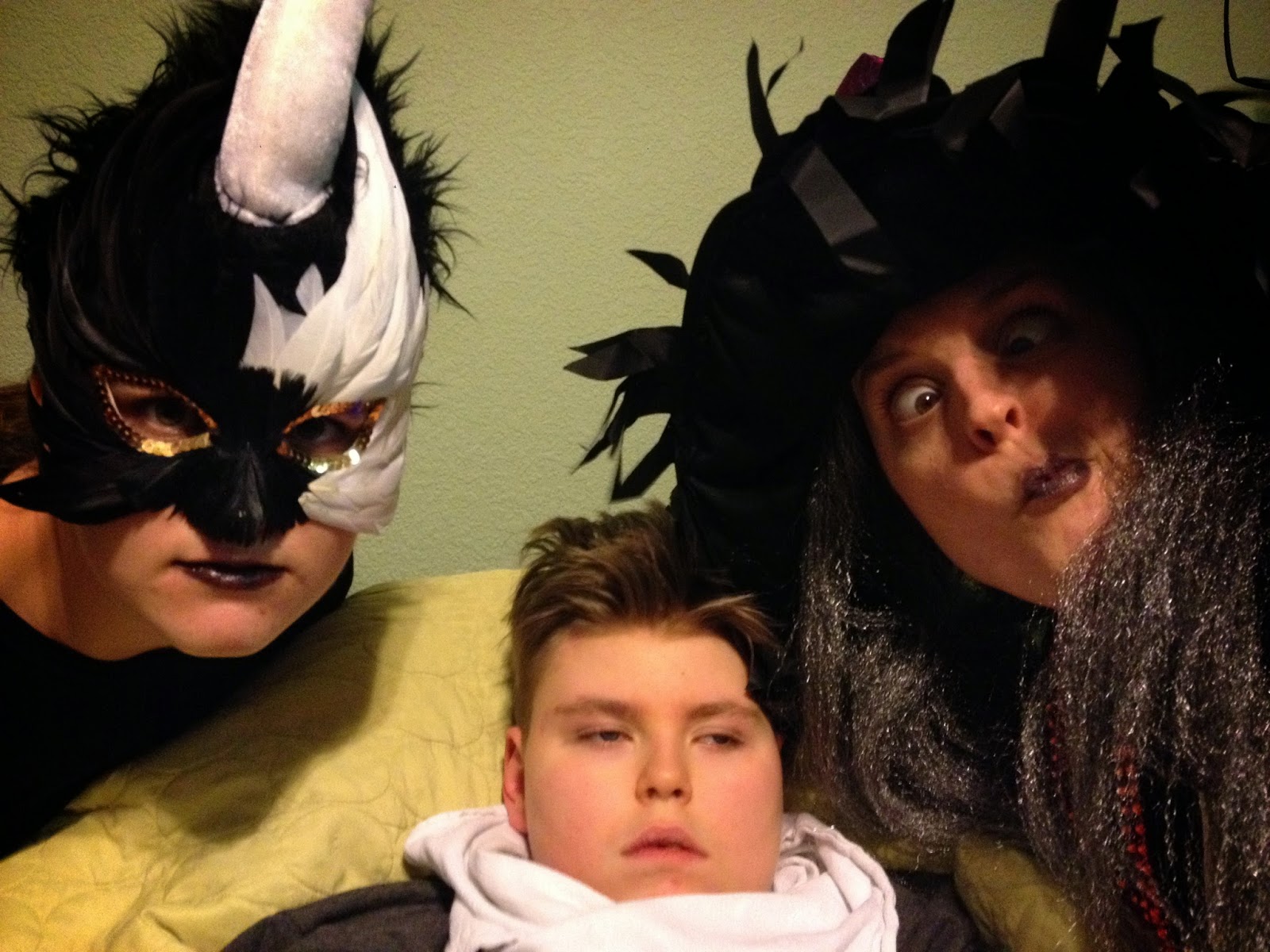 So, we turned the lights down, handed him his special light up balloon from his pal Ms. B.  and started the Dark Knight series, for a Batman marathon while we answered the door to trick the trick or treaters. 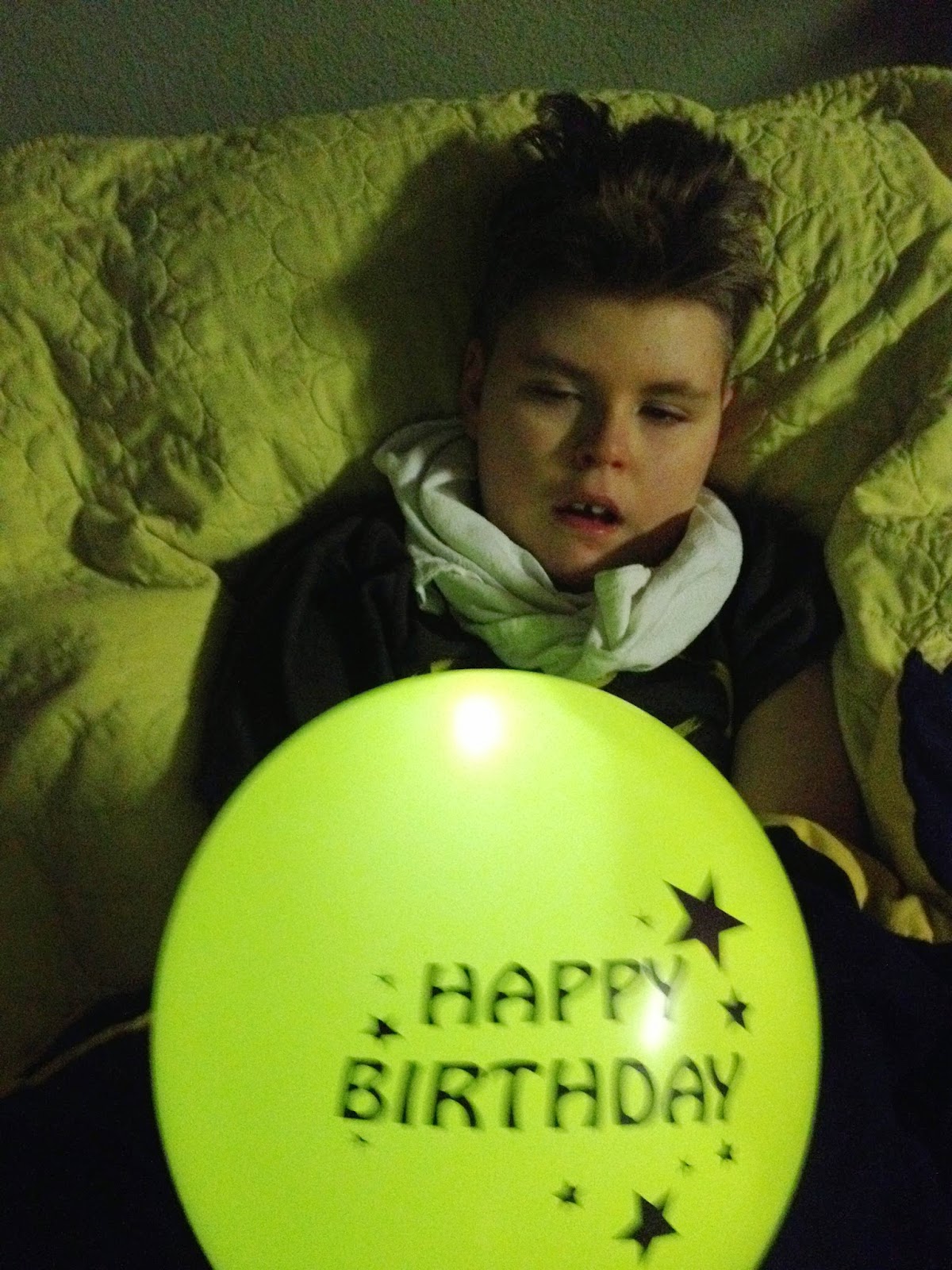 It was a great day celebrating our guy.  Pretty low-key, but after some of the birthdays he's had lately, it was great to just relax and do exactly what Max wanted for the day.

Birthday is over and now we're on to our next projects, Max is gathering some stocking stuffers for the troops.  And we're about to roll out a very special project of adapting toys for kids who need to access them with switches, like Max.

This toy is one we got for his birthday, a Minion fart gun.  Yes, it's just as rude as it sounds...and he LOVES it.  Steve popped it open and fixed it for Max to use with his switch.  We'll update more on the new project soon!