Before there was opera, before the bagpipes, before Elmo, Curious George, and Batman...there was Jack.

From his earliest days, the only music that has consistently been Max's go-to, calm him down, stop the crying, make him happy, is Jack Johnson.

Jack has been with Max through every long hospital stay.  He's been with Max through extra hard physical therapy work.  He's inspired him in art therapy.  He's the reward at the end of school and speech therapy for a job well done.  And he's a constant in music therapy.  There is scarcely a day that goes by that Jack Johnson isn't playing at least for part of the day in our house.

All of this is why when we got a phone call from the Do It For The Love Foundation letting us know that not only would Max be seeing Michael Franti in July, but he would get to also see Jack Johnson in August, I couldn't hold back my tears while thanking them. Do It For The Love grants wishes to people with life-threatening illnesses, children with severe challenges, and wounded veterans by sending them and their family members to their favorite concerts.

Jack Johnson's concert sold out within minutes of going on sale.  I refreshed and refreshed and tried to buy the tickets the minute they were available.  But, I had no such luck.  I put it out of my head until I got the phone call from Do It For The Love.  They got a referral for a wish for Max to see Jack Johnson from his friend Lily.  They didn't think initially they would be able to make it happen, but in the end, they were able to find 3 more tickets, which brings us to current time.  Last night, in fact, was the big night.

Max woke up ready for the concert.  He wanted to listen to Jack Johnson music, so we went through ALL his cd's.  Max sang along all day, and refused any downtime or naps. He made him a card, and chose which of his original songs he wanted to give to Jack on a cd. 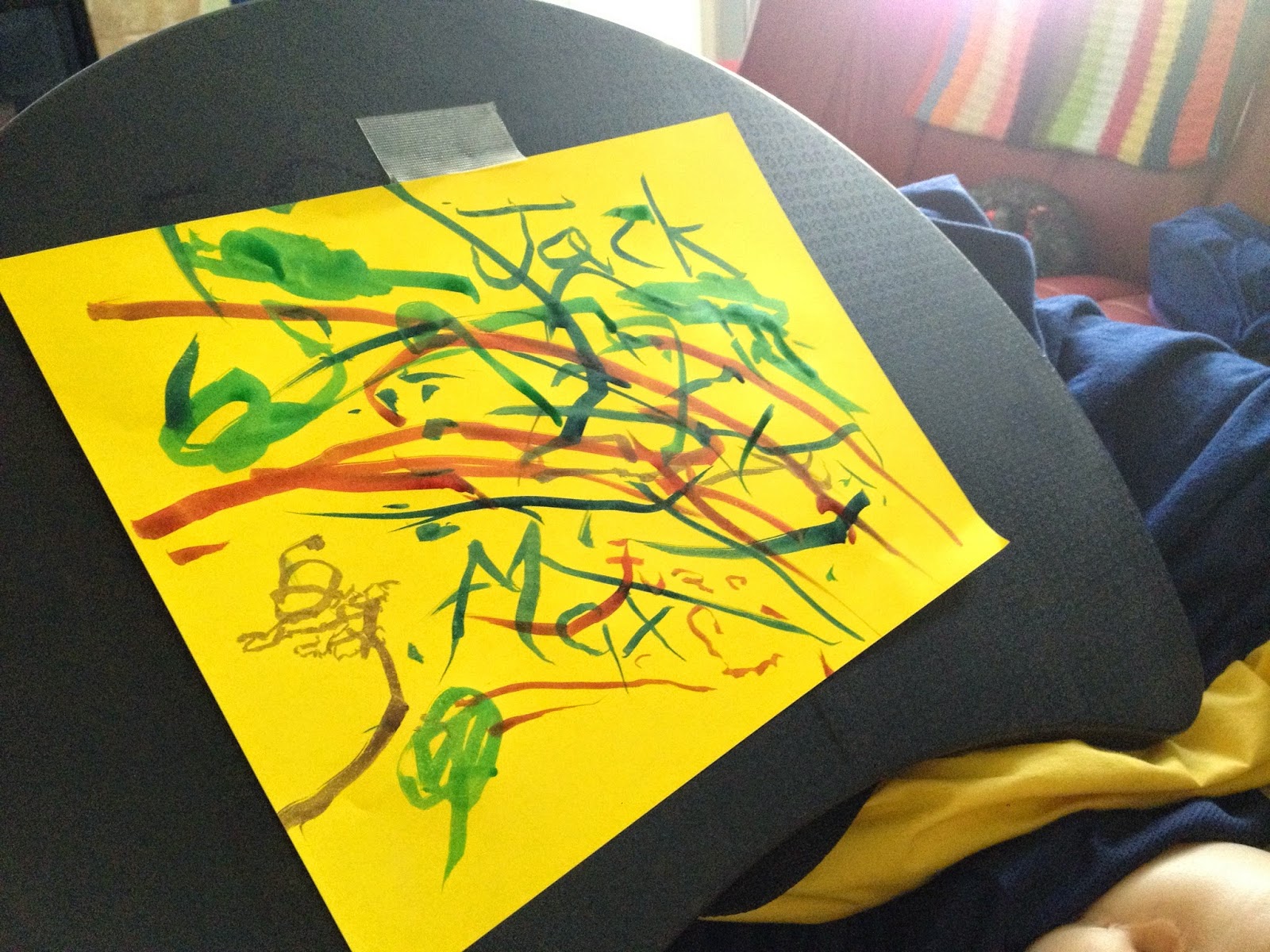 When we made it to Red Rocks, he was still listening and singing, along with squeals and peals of laughter.  We got parked and shuttled up to the amphitheater where we were to meet Jack's assistant to get to our seats and for the very special treat of Max meeting Jack.

We visited with the security crew who were there the night of Michael Franti concert, while we waited on Jack to finish some interviews and his assistant to come get us.

Max gave him the card and cd he made for him, and we told Jack about how much he's a part of Max's every day life.  He told us and Max he was honored to get to meet him and play for him.  When Max started singing, he told him he liked that, and to be sure to save some for the concert to help him out. 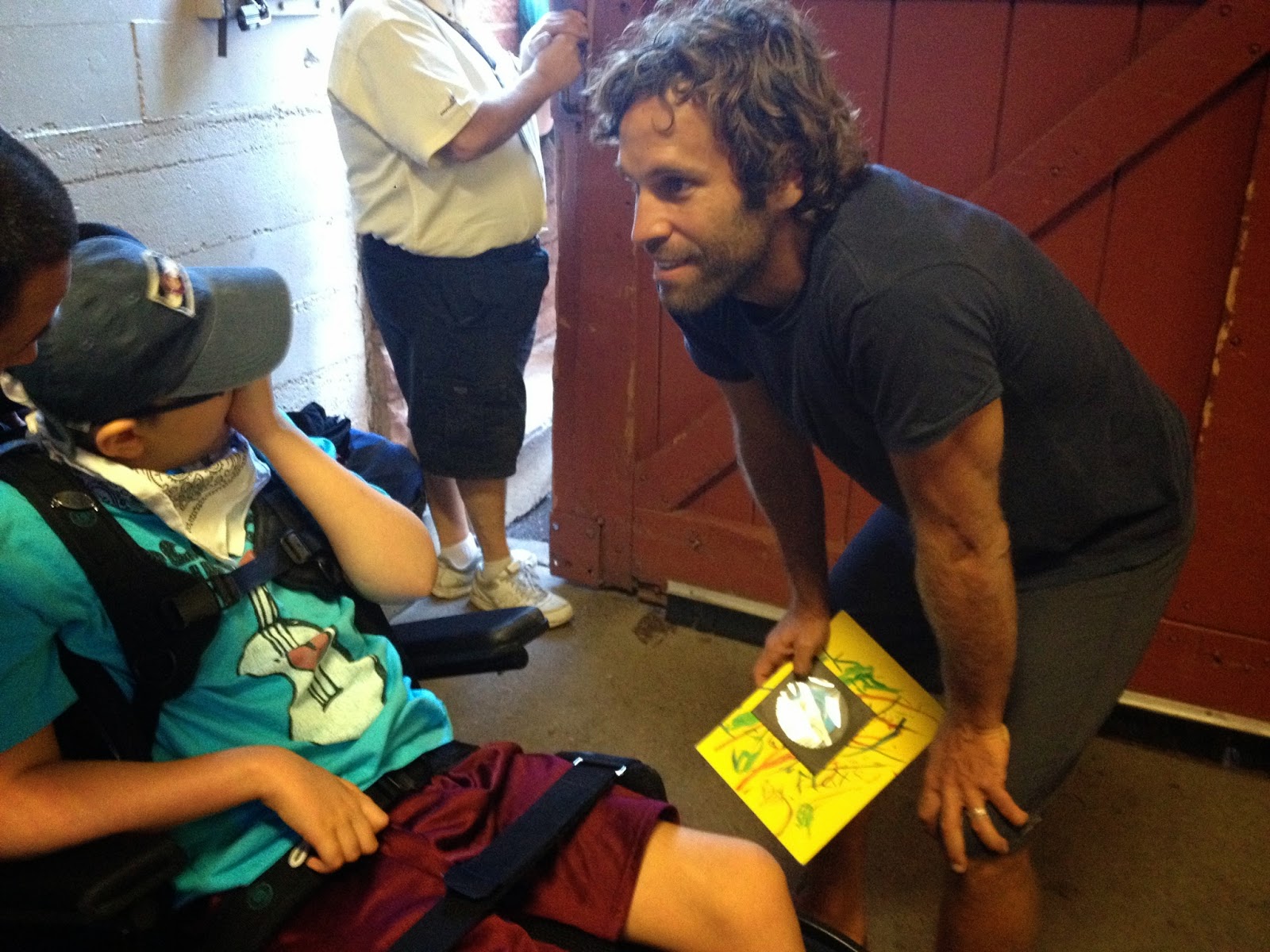 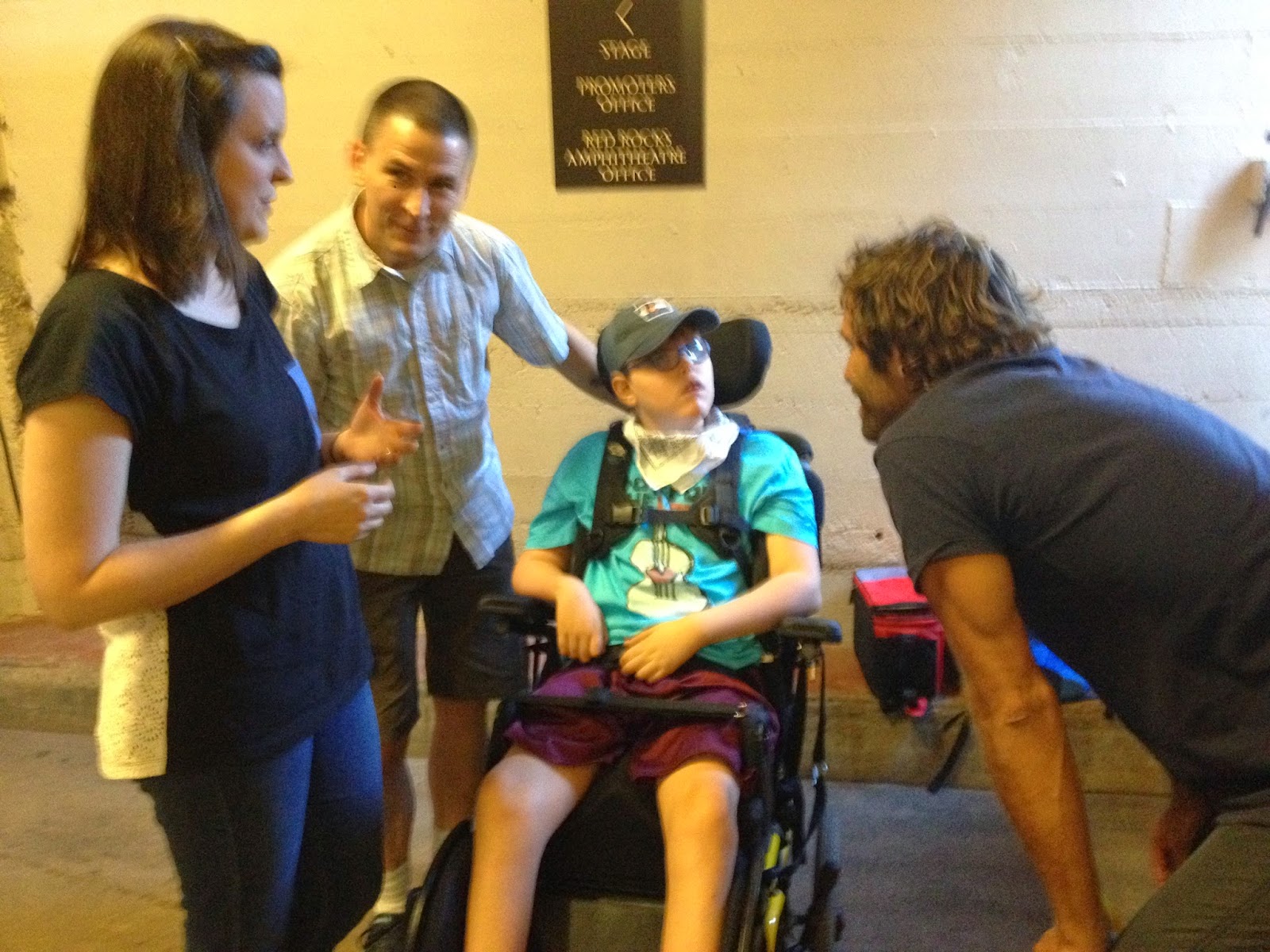 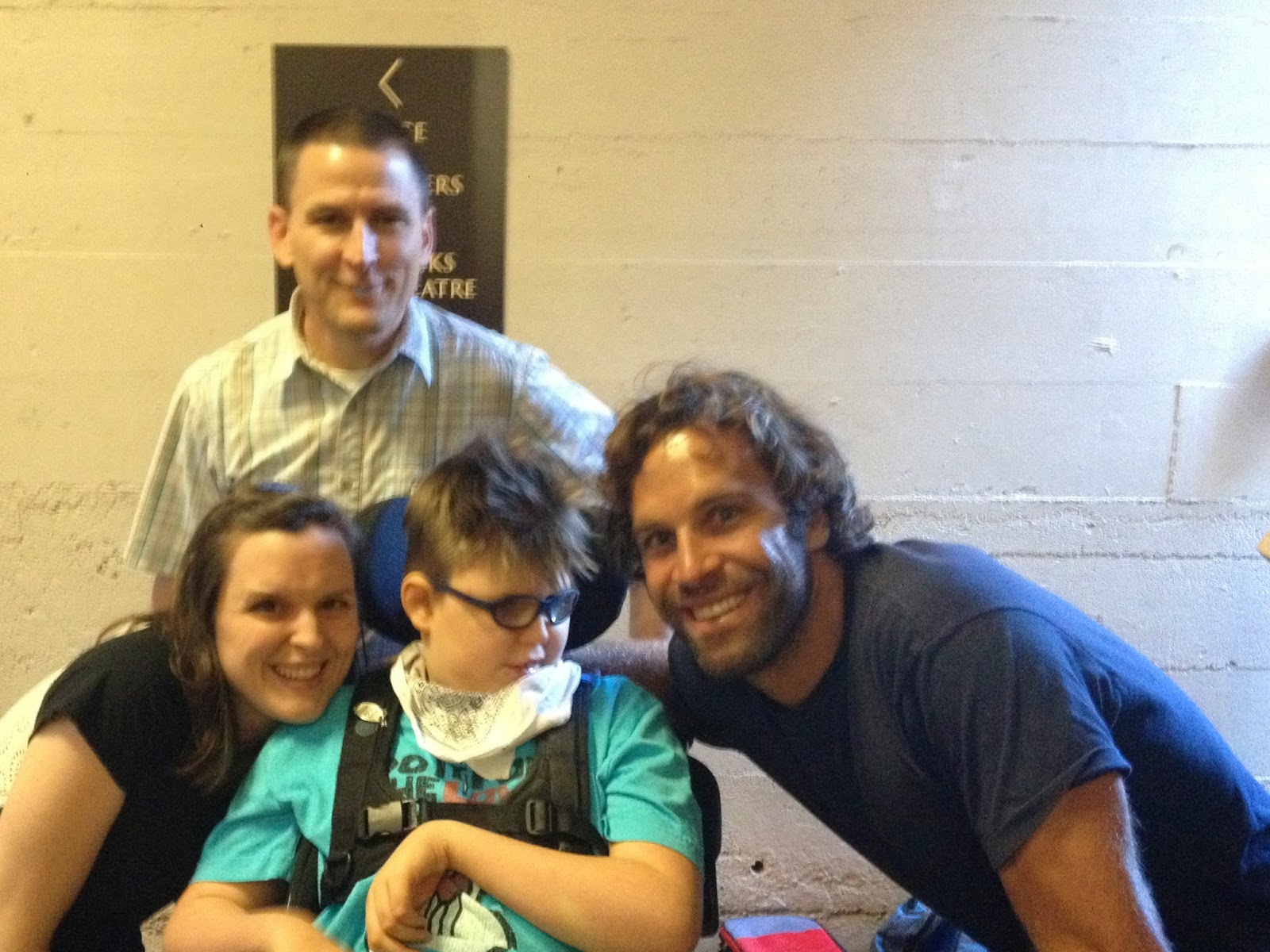 Jack told Max he had to go write down the songs he was going to sing tonight and try to remember the words.  We thanked him again for meeting with Max, and he told Max he was happy to get to meet him. It was simply sublime for Max to meet his favorite musical friend.

We headed out to wait on where we would be sitting.  At Red Rocks, the front row is supposed to be saved for handicap accessible ticket holders.  As it works out, they are usually used for special guests, and the occasional wheelchair.  Since they were all taken up by others, we weren't sure he wolud be sitting up front, but thankfully they were able to squeeze Max in and he got to sit on the front row, in front of the speakers.

We were initially worried about the sound being too loud, but Max LOVED it! I think he figured it was about time someone turned up his music to the level he likes to listen to it!

After the opening band, ALO, finished their set, Jack came on and rocked out with Max (and about 10,000 other people) for a couple of hours.  We really didn't know if Max would last for the whole show, but he lasted just about to the end.  We had to leave a bit early so we could beat the crowd out and meet Max's nurse at home before midnight. 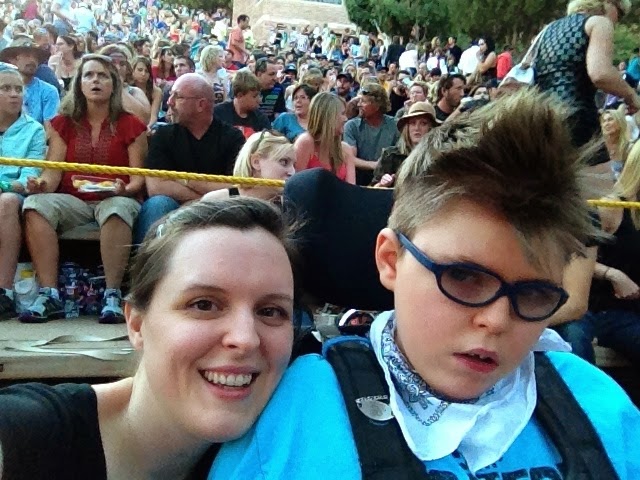 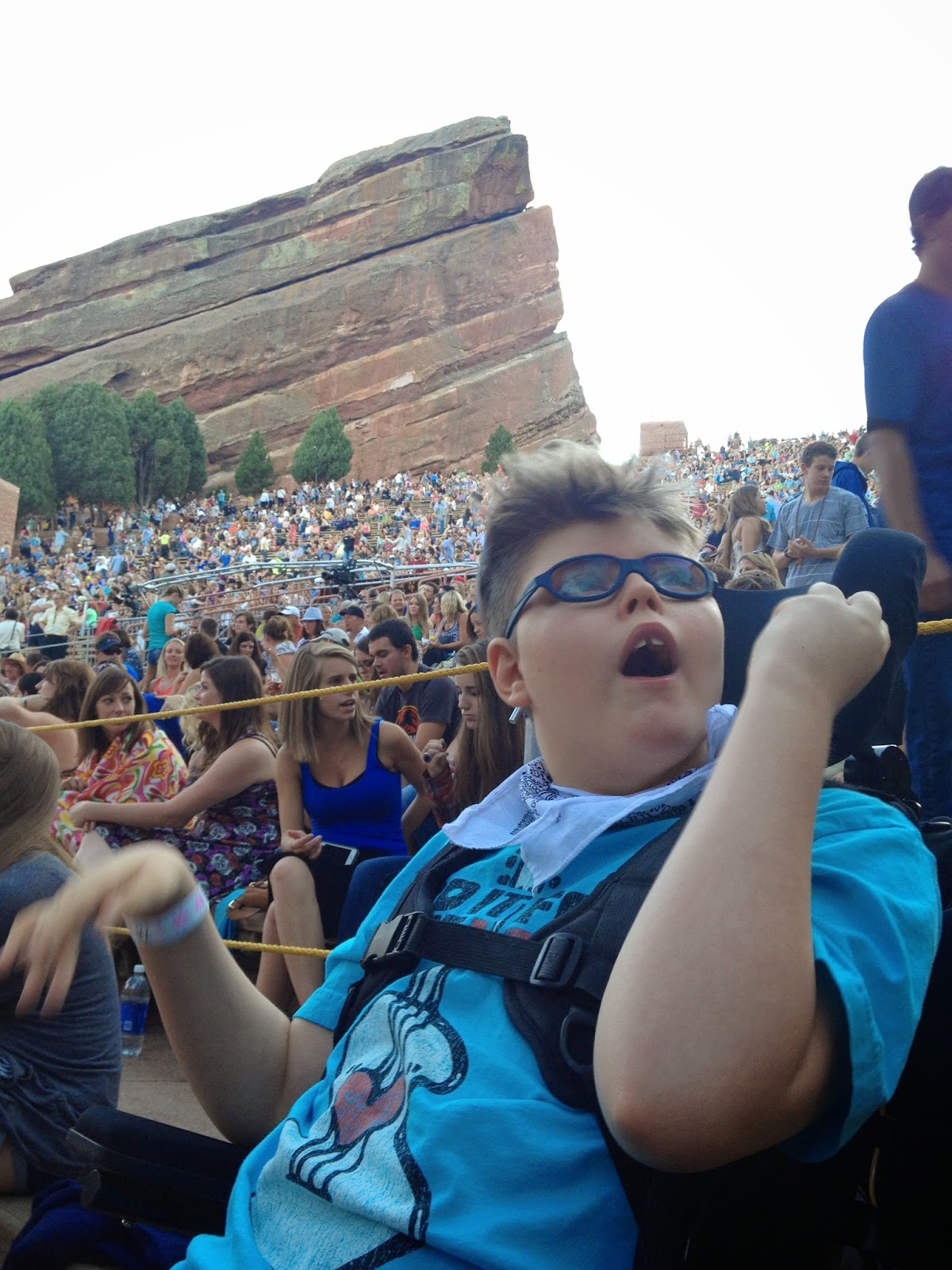 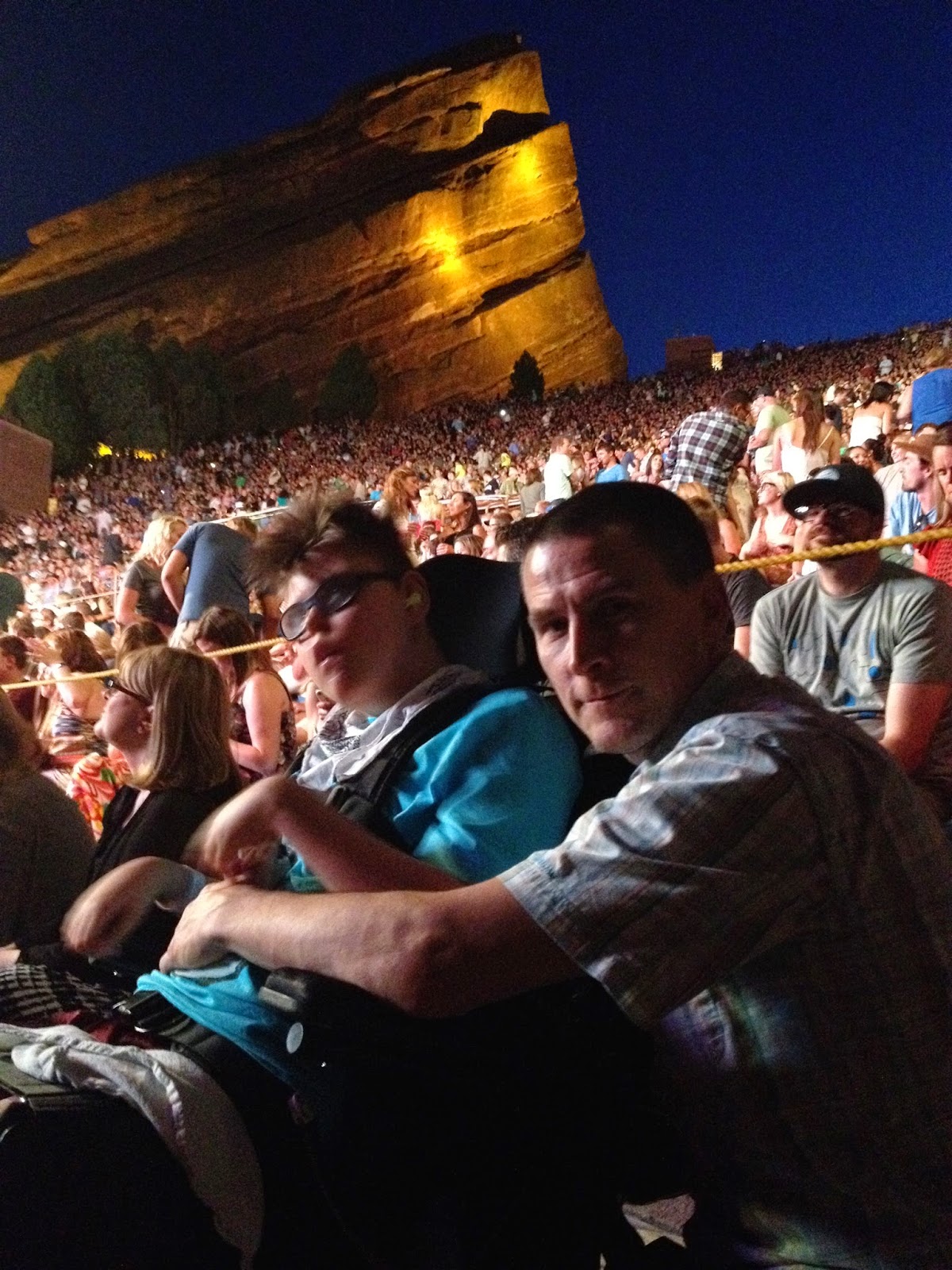 As the sun set, my iphone camera wasn't picking much up, but I still tried to capture just how much fun Max was having.  And since the camera wasn't focusing or adjusting to the light, I put it away and we sang and danced. 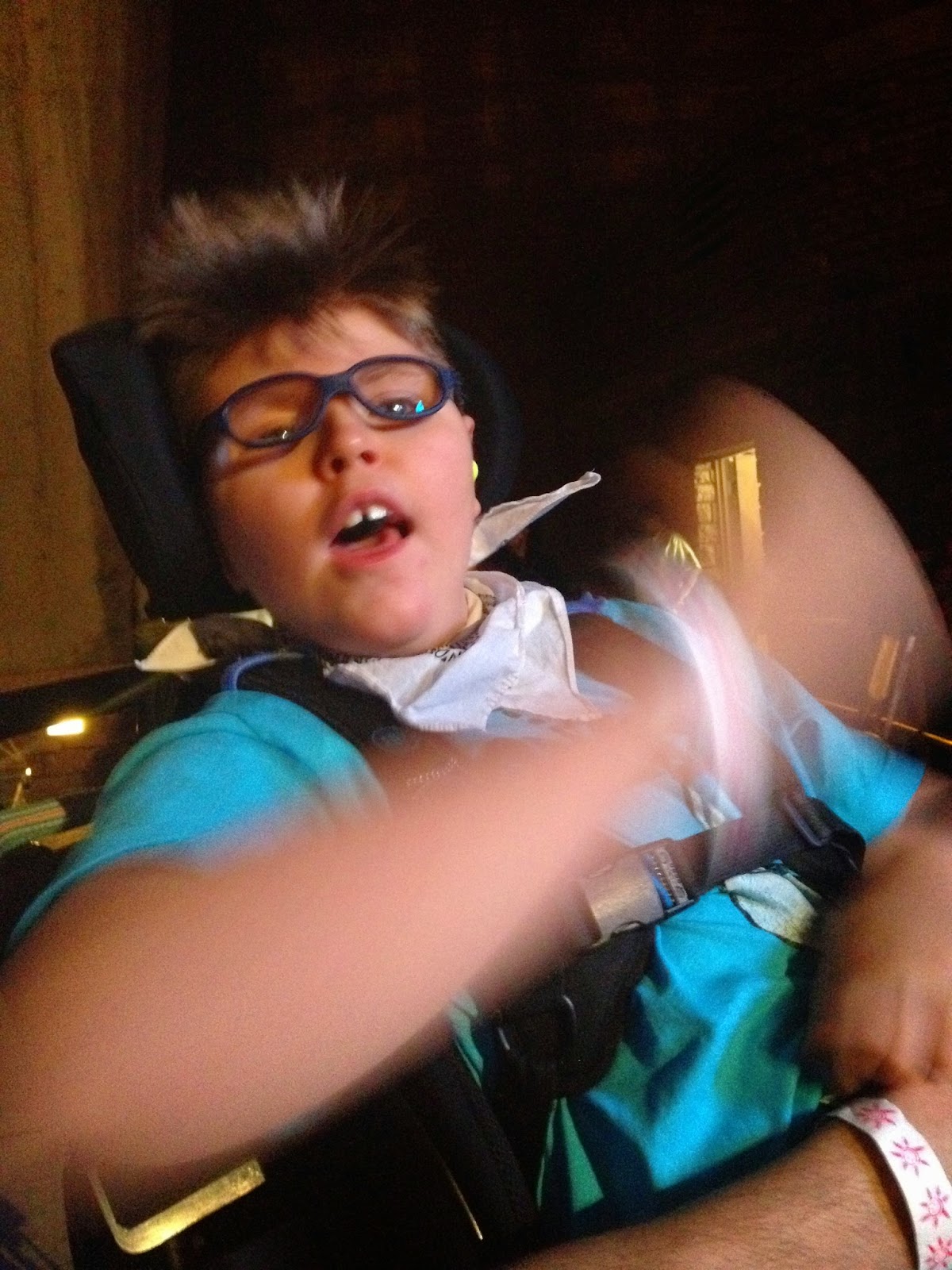 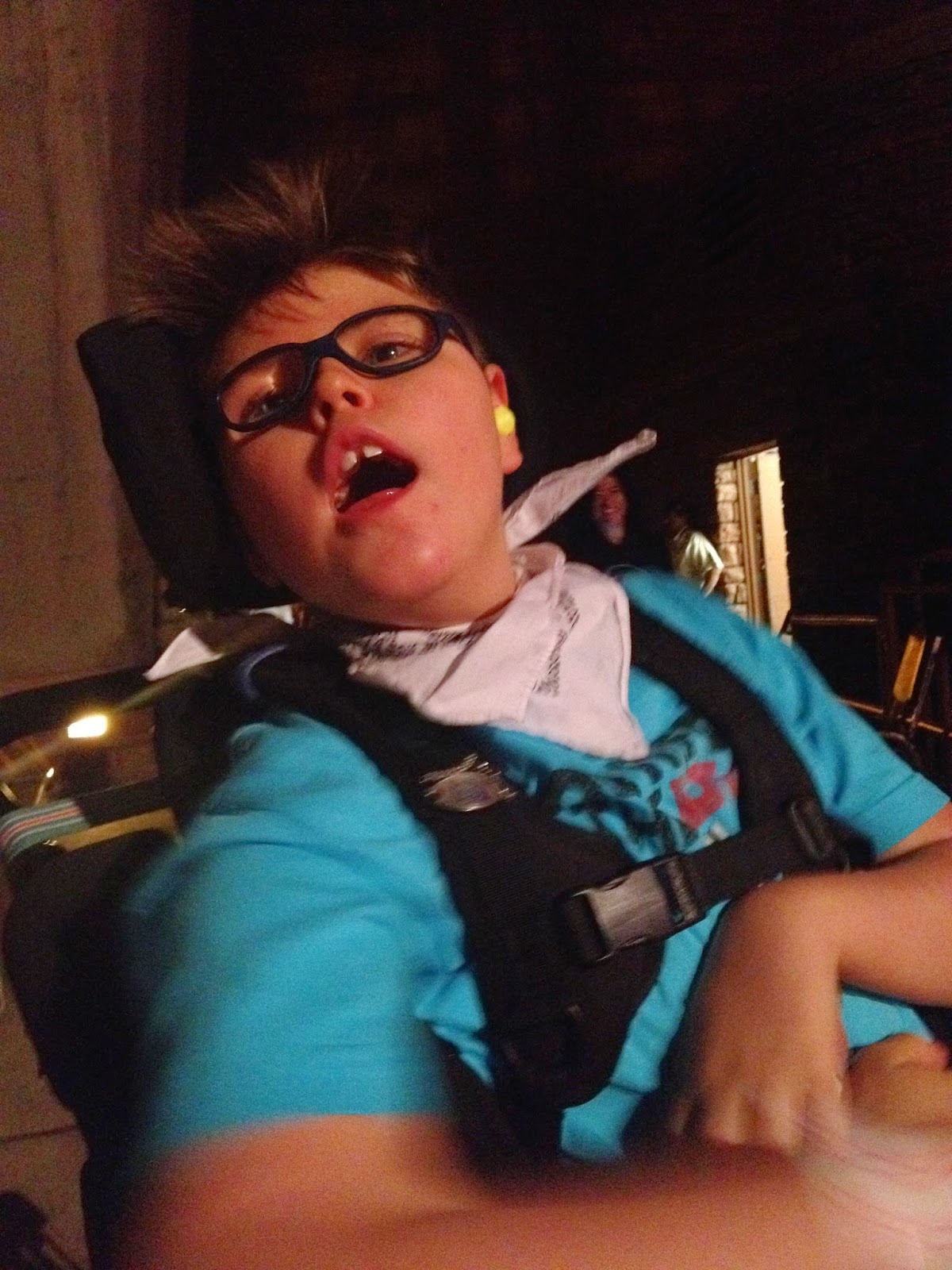 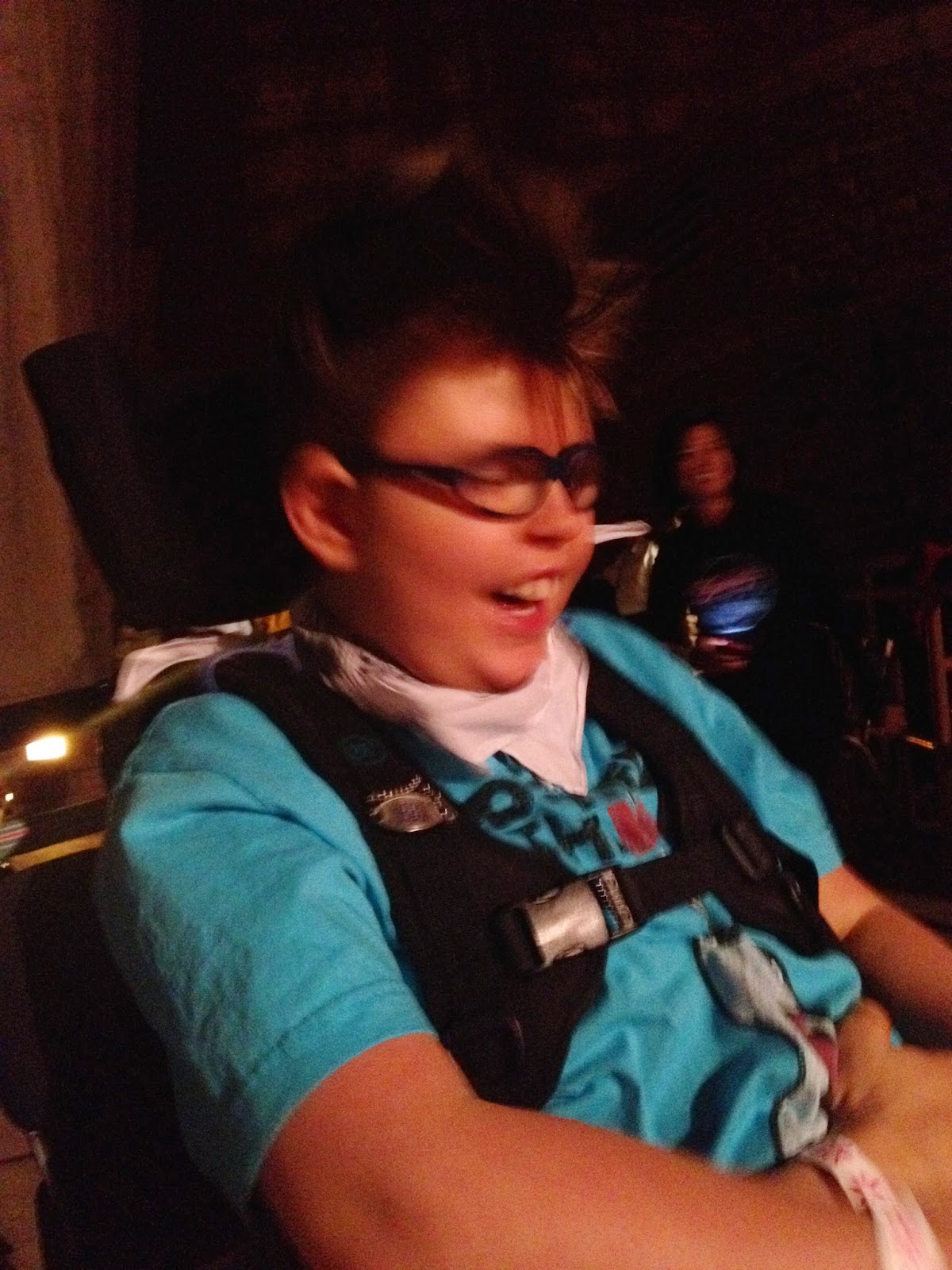 Max was able to wait until he heard his favorite songs of Jack's, Upside Down, from his Curious George CD, and Banana Pancakes from his In Between Dreams CD.

Jack introduced Upside Down by saying it was for all the kids there tonight...but we know, it was for Max.  I have sung this song to Max at least a million times through his life.  There is one verse that always gets me, and being there last night under the stars, with Max smiling from ear to ear listening to Jack sing his song to him...well, it was as close to perfect as it could have been.

It was just such a wonderful experience.  One that could not have been possible without Max's very precious friend, Lily, who requested the wish for Max.  And Do It For The Love Foundation for granting the wish. Go like them on Facebook, donate to them so they can grant more wishes to kids like Max, nominate someone you know who could benefit from the joy of music to help them through their difficult journey.

And finally, thank you to Jack Johnson.  You made this little guy's dreams come true.  It's something we could never have done for him on our own, and we are so incredibly grateful you took the time out of your busy schedule to visit with him. 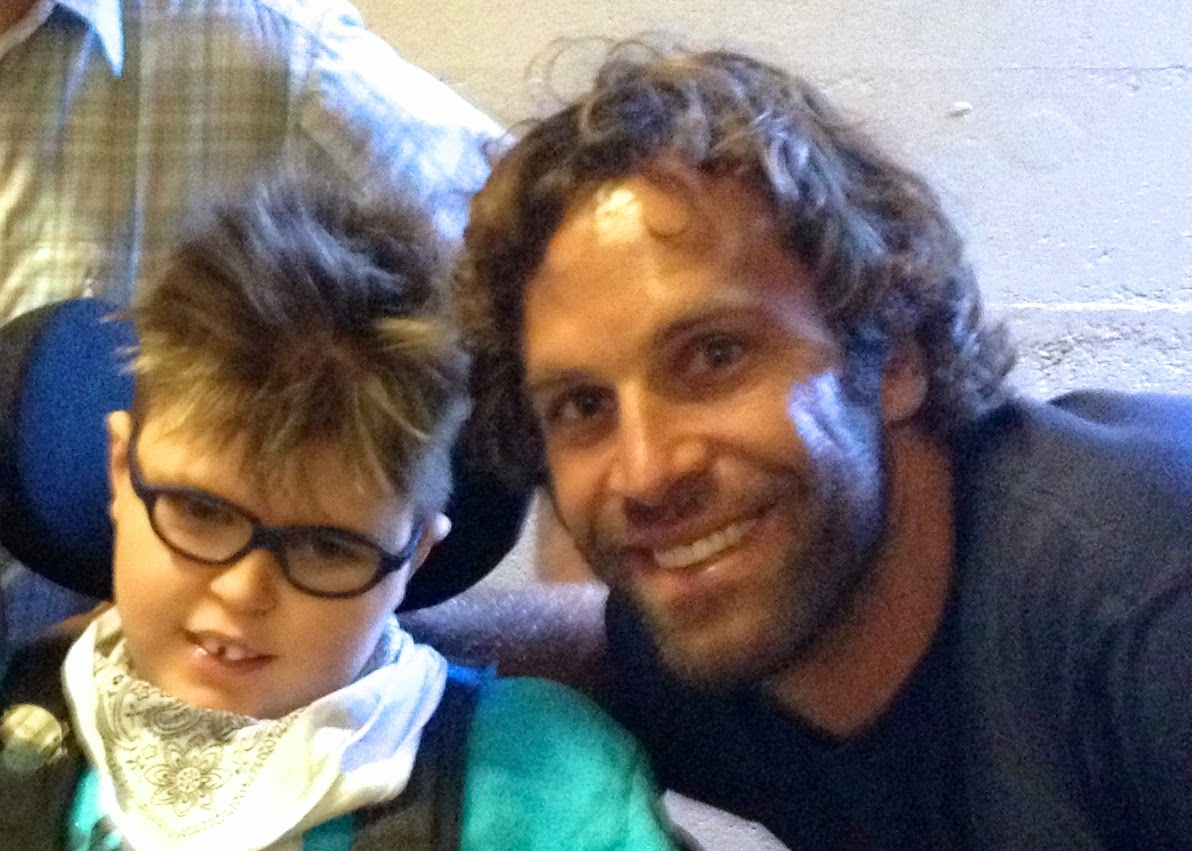 What a wonderful story! I'm in tears -- what a joyful evening for Max and your family!

How utterly wonderful for Max and for you and, most of all, for Jack Johnson! What's so interesting to me, too, is that Sophie's teacher, a musician and guitar player, claims that Sophie adores it when he plays Jack Johnson songs. She does have a CD, but I had never discerned this.