This year, I've had a hard time getting into the spirit of Christmas.  I started the month trying to"give" my way into it.   I've given food baskets to schools, I've given extra money at the check-out line, I've dumped change into the red buckets, I've given gifts, and to fundraisers and baked goodies for family and friends, and bought a few gifts....but still ------ flat.

Then, this past week happened.


It was Max's last week of school and therapy before the holiday break. He and Ms. B. exchanged their gifts, and did a lot of chatting this week.

In speech therapy, he wanted to write his letter to Santa.  Instead of using his bank of words in his computer's vocabulary, he wanted to spell his words out.  Sometimes that meant he spelled how he thought it should sound, and sometimes he chose one of the auto-predicted words.


Translated, it says: "ho, ho, ho.  hello! can go. like my friends."  The part that says "put it on there" was directed at me, as I was writing down his letter to Santa.  I asked him if he wanted to ask Santa for a present, since all he's given us this year was "mystery and mysterious" as what he wanted.  He answered with put it on there and then told me he was all done.  Today I figured out what his mystery was as I was spelling out an idea for a present to Steve.  Max started laughing and giving us his sign for yes.  I joked with him, you don't know what I'm talking about!  And he laughed and laughed.  I just shook my head at him...such a stinker!  He totally knew what we were talking about.

Max also had art AND music at the same time this week. We are so happy we were able to restart therapy with his art therapist privately.  Yes, it's another therapy out of pocket, but after this week's session I know we made the right decision.  He was drawing with one hand, and strumming the guitar with the other.  All while looking right at me and belting out the most beautiful version of Silent Night I've ever heard.  He worked so hard at using so many of his skills at once!


He chose a "gigantic" yellow star to go on the top of his Christmas tree.

Max's classmates all made him cards and a special ornament for the tree they had all signed.  He joined in over the computer for them to sing to him some songs, and wish him a Merry Christmas. He also got to join the whole school for a holiday sing along.  He was so excited when it was time for the 4th graders to perform.  He decided to sing along!  It made me smile for the community he has.

Then, there's this fundraiser for Max.  It's made my grinchy heart grow.  While it's hard for me to ask for help, I know it's all been given happily for Max.  And there's no way I could not take that love and appreciate it.  It's actually been overwhelming at moments to read your kind words about our boy.  I've taken them in a little at a time because it has been such a busy week with school and therapy that I found myself avoiding facebook in between appointments so I wouldn't be red eyed and crying after every time someone would show up!  We are beyond grateful for the strong start his fundraiser has taken.

He worked hard all week to get all of his reward stickers on his chart in school and therapy.  His special reward at the end of this week was a trip at night to look at Christmas lights.  We got to do that tonight, and he was beside himself with excitement!  There was a steady stream of people at the botanic gardens, but we were able to tuck off when the crowds were too dense to avoid any coughers in the crowd.  It was snowing and mighty cold, but Max was as happy as could be.  Several times people stopped to say hello to Max, and he responded to them.  A response from Max is not always immediate, but he would chirp right back to them each time.  He was definitely in his happy place. 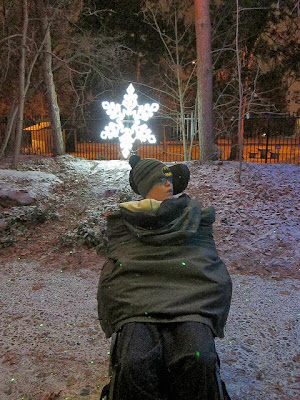 merry Christmas Max and family
May it be amazing

I just want to say Max we may never meet in person as I live in Yellowknife, Northwest Territories Canada but you have impacted my life and made me a better person.
I have a better understanding of working with families as I work with children with disabilities.
You are an amazing young man! And so is the family, friends and community that support you.

Merry Christmas. Max, and all of you, are very much loved. Wished we could join in on the giving but we can pray. We continue to do that. Much love.