This year Christmas was very low key and quiet...just what we were looking for after a big birthday and big Thanksgiving holiday.  Max has had a lot of fun deciding what he would like to get for each of us, and what he wanted from Santa too, although, he kept it a secret until December 23rd.

The last week of school and therapy, Max made his gifts for teachers and therapists.  We made Snow-Max ornaments for them all.  He drew on the faces and chose the colors for the scarf and ear muffs...he doesn't veer too far from his favorites.  I'm just glad I didn't have to stencil Batman on these babies! 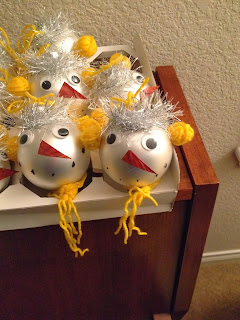 Before he was finished with speech therapy, he worked with Ms. B. to choose what he would like to get for each of us for Christmas.  He hasn't given Abbey her's yet, so that's still a surprise, but he chose slippers for Steve, and "dinner with people" for me.  He was adamant that Steve's slippers should look like his, which are blue on blue stripe sock slippers.  The thing is, they don't make those for grown men, at least not on Amazon.com, and not in yellow and blue - his chosen colors.  So, we got creative and made them for him.  He wanted them to be blue socks, yellow stripes, and to say Dad-Dad on them. 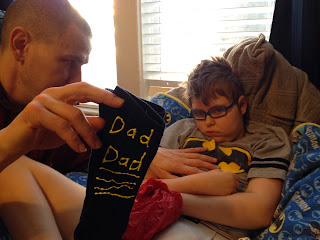 For me, he told Steve and Ms. B. he wanted me to have dinner with people.  When Steve told me on Christmas morning that's what he wanted for me, I asked who that meant, and he told us with Daddy. So, dinner out it is!

He chose something special for Abbey, and the only other person he chose for was his cousin Addie. He wanted her to have eyeglasses, that were pink, and gigantic.  Nailed it! 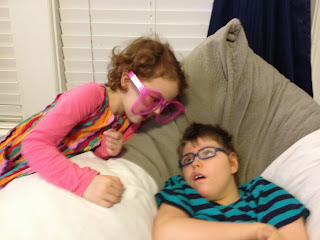 He wasn't giving us many clues as to what he wanted from Santa.  He told Santa he likes his friends, but when we would ask him what he would like as a gift, he told us "mystery" and "mysterious". He told his teacher that Santa brings him chocolate, fruit and money in his stocking...and what do you know? That's exactly what he got! 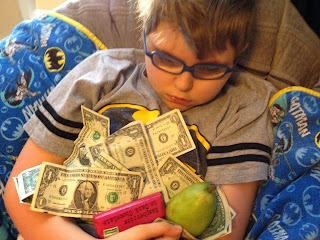 We figured we couldn't go wrong with a drum someone in the neighborhood was unloading, so we snatched that up quickly as one of his gifts.  It's loud, people...so loud.  And he loves it. 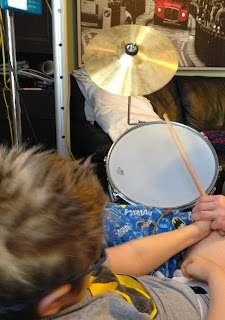 Max's gift from Santa took some last minute figuring out, but we finally got it sorted and Santa came through with a great deal on it.  He now has his very own guitar to strum. 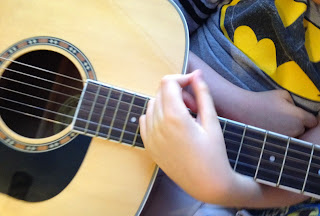 It was a great Christmas together...at home.  Just what we needed this year.  We're looking forward to 2014.   We're working on getting the information we need to start the process of making adaptions to rooms for Max.  I have a feeling that is going to take up a good portion of the year ahead. But, we're grateful for the donations which have come in so far to help us along to that goal.

What a lovely Christmas! Max will soon be a one man band!

Merry Christmas to all of you!