We sat in the OR waiting room last night and realized this was Max's 10th surgery in his almost 10 years of life.

I noticed some pretty intense swelling yesterday while I was changing Max's pants.  We had experienced this before, so we knew time was of essence, while hoping it wasn't another testicular torsion.  That led to a removal of a testicle a couple of years ago.  (I won't link all of this, look it up if you're really interested, but be forewarned!)

We gathered up Max's bags and headed out the door to the hospital.  I called all of his doctors, and nurse for last night to let them know we were on our way.

Max is usually seen pretty quickly through the ER, but when certain doctors call ahead, he's seen even more quickly.  We walked in the door to the ER and the triage nurse met us and said, is this Max?  We said yes and she took us straight back to a room.

Another nurse met us in there to do vitals on Max, along with a registration person who helped us with getting him checked in.  Vitals were almost done, and the attending came in to check Max.  He checked the area and said he was going to get the ultra-sound ordered and get Urology in to see him.  As the attending was leaving, the nurses were coming in to start an IV.

A seasoned nurse was training two other nurses, and one was ready to jump in start an IV.  He was not getting it, and fishing around while Max was very uncomfortable.  One of the nurses said, why don't we give him a rest and try again in a minute.  By this time the Urology resident was there to check him. The nurse trying to get the IV said, I can get it...let me just try one more time.  I looked at him square on and said "One more is all you get, then you stop!"  He pulled out and put a bandaid on.  Grrrr...  The head nurse came in and got it first stick with no issue.  We are always for nurses and doctors learning on Max, but there is a time for that.  And starting an IV in an emergency setting was not it yesterday.

As soon as Urology saw him, they canceled the ultrasound order and got a consent for surgery form out.  Steve signed it, lab levels were drawn, and we were rolling out to the OR.  It was such a flash!!

Max was in surgery for about an hour and a half.  The doctor came out to tell us he did some extra work to try to save his remaining testicle, but time will tell if blood flow will return.  If it does not, we will be engaged much more with Endocrinology.

His doctors were all fine with him coming home last night, because we had his nurse here.  And we did not want him to catch anything in the hospital!  So, he was sent home with pain medicine and some braces to keep his legs straight so he can't kick the incision.  He is quite swollen, and has been in some pain today.  It is going to take a while for all the swelling to come down.  And we will have a follow-up in a month with Urology to see if it worked.

Things get so exciting so quickly around here.  This was one of the busiest weeks on the calendar this year, and in a matter of four hours everything changed.  I canceled everything extra for the rest of the week.  And we'll see how he's feeling each day about school and therapy.

For now, we'll let Max rest and his body heal.  And hope for no more excitement any time soon! 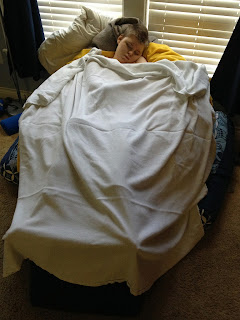 Never a dull moment for you guys! I am sending all my well wishes to Max and continued strength and courage to the rest of you. Love, too.