I am the main writer on Max's blog.  Occasionally, Steve will update when Max is sick, or when my emotions are too strong to get any coherent thoughts out on a subject, like the most recent Cease and Desist post.

Having a person who has taken it upon themselves to reach out to contact our children without contacting us first, without reason, and without any level of appropriateness has really been very unsettling, to say the least.

Since December, I have not posted anything online without thinking, oh no - should I put that?  Will this mean another letter will come and terrorize us?  Should I let them know this about our lives?

Last night, it all came to an ugly head when I posted this photo on my facebook page. 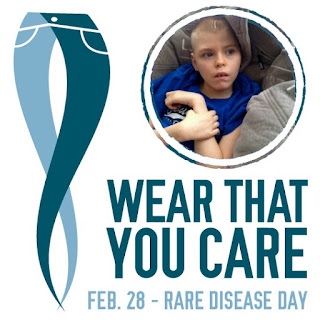 The point was to share that next week is Rare Disease Day, and promote the Global Jeans Project...wear jeans to spread awareness for those with rare genes, like Max.  Then, the photo started being shared among my friends.  That's the point...share, spread awareness for rare diseases.  But it freaked me out because I was afraid of the creep who has been mailing my children letters, could see it.  So, I deleted it.  No explanation, I just deleted it, and it went away.

I was angry because this person who has targeted our family has taken something very special away from us.  And I refuse to allow them take it away another day.

I started writing about Max when he was first diagnosed.  It was a way to let friends and family know what was happening when we had long hospital stays.  I started on emails, then moved to some of the first blogging formats and then on to more public formats like Facebook.  The whole point was to share our son's story with the world.  He does have exceptionally rare genes, and rare diseases.  It was a way to connect to other families who also have children with rare diseases.  It was a way for doctors to learn more about Max outside of the times they see him very sick.  It was a way for his family to know what he's doing, see him grow up in pictures and videos, since he can't travel to see them.  It was means of getting outside of this very isolating life...the internet opened the world again to us.

We met friends around the world who have become some of our strongest supporters.  We reconnected with family who we've lost contact with along the years.  Our community is strong, and we know that you all would move mountains for our boy, all we have to do is ask.

Then some person mistakingly thought they needed to impose themselves into that community, but not by befriending us.  Not by asking us about Max.  Not by trying to understand what is comfortable to us.  No, they sent letter after letter to my children, acting as if they've known us all for years.  This is where they're so terribly, horribly mistaken.

You see, if this person truly knew anything about us, they would have shuddered to think that we were the right family to mess with.  They would have run at the thought of what my husband would do to the person who decides to target his children.  Or at his globally recognized skills in tracking down what people do on computers. They wouldn't have sent a single letter if they actually knew the contacts we have the world over who would do anything for us.  No, they could not have known us at all, because if they did, they'd know it is absolutely insane to think that they would get away with this.

We started 9 years ago introducing our boy to the world, and we started 9 years ago introducing the world to Max.  We may come across people who overstep the social boundaries, and become inappropriate in their correspondences with Max and Abbey.  That's the unfortunate nature of opening our lives up to the world wide web.  But, it will not stop us anymore.  We are careful, and we are watchful, and I will say it again - you have absolutely no idea who you're messing with if you think you would get away with terrorizing my family.  I am not hiding back, scared of what some troll might read and use in a letter.  You have no power here.

On to sharing our boy with the world.  He's been given to all of us.  We're just the lucky ones who get to keep him with us all his days.  Thank you to our community of supporters who are along for the ride.
Posted by Deana at 11:33 AM

Go Momma Bear!! And you're right, you have a huge community of love & support for Max and your family. There seems to always be someone who's purpose is evil. But here, in this family of love, evil is sincerely outnumbered!

Go Momma Bear!! And you're right! You have a huge community of support for Max and your family. There always seems to be someone evil. However, in this family of love and support, evil is sincerely outnumbered!

Good for you! And let me say one more time how deeply angered I am on your behalf. You are right to move on and not to allow this ill person to change things. Max has a message that needs to be shared!

Sending you love from our house to yours! I do appreciate so much that you write and share. It helps me understand your life and the lives of others who live closer to us... it helps me to want more compassion in me, more joy in me to share with others who may need a spark of hope that day. We live in a very depressed community and it encourages me all the time, that no matter the adversity thrown at you, that you keep shining in the darkness and bringing light and love. Peace to you and yours. Your gems are treasured by those who recognize your worth. As for the other, we will pray he/she is silenced- because your voice must be heard.