Max has been under the weather for the past few days.  He had fever, sneezes, coughing....the usual "justavirus" hit him pretty hard.  Although he missed some therapy and school, we were thankfully able to keep him at home through it all.

He started to feel much better yesterday, but we still hung close to home for the Daddy to get work done and the Sister to get ready for prom.  He got in on a few pictures with her all dressed up and even gave us some smiles! 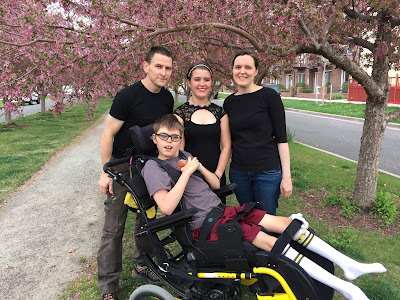 Today, we knew we wanted to try and get him outside since he's been cooped up for days feeling punky.  We came up with the idea to take a ride out to the airport...pretty fun, huh? Actually a ride to the airport usually means someone is leaving so it's not always Max's favorite thing to do.  We were able to convince him it would be fun today by taking the newly opened DIA A-Line train from downtown Denver to Denver International Airport.

Or first speed bump in our plan was it was also a Rockies baseball game, so parking downtown was impossible in Max's huge van.  There are about three handicap designated street spots near the train station and they're always taken on Sundays.  After driving around for about 20 minutes trying to score a spot, I remembered there were several stops along the route and we could probably find one much less crowded.   We found the next stop and got going on our little adventure! 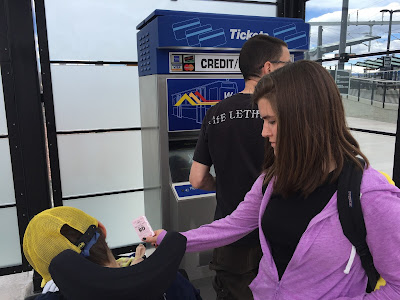 We got our tickets.  The kids were a discount, and our ticket was $9.00 for an all day pass. 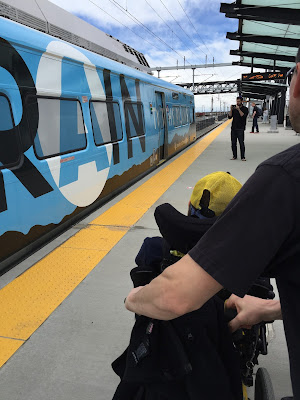 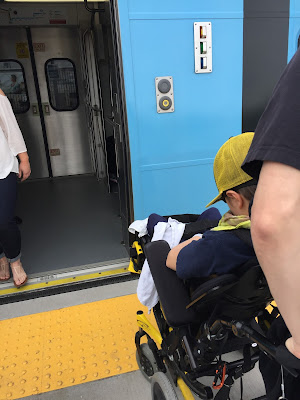 The train arrived and we were able to roll right on.  On the other light-rail trains throughout the metro area you have to get on at the right door and have assistance to board.  The whole experience was very accessible! 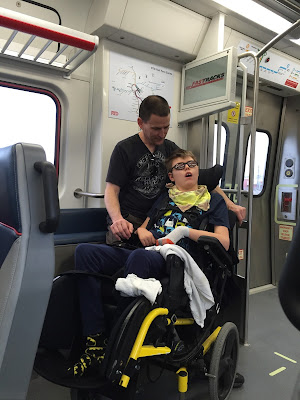 Max made pals with the train officer and away we went to the airport! 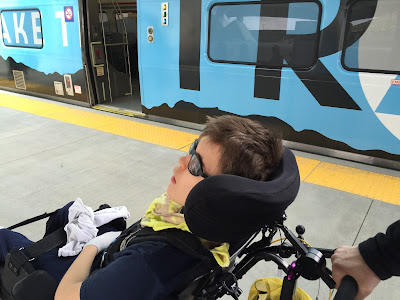 There are 6 stops between downtown and the airport, and faster than driving. 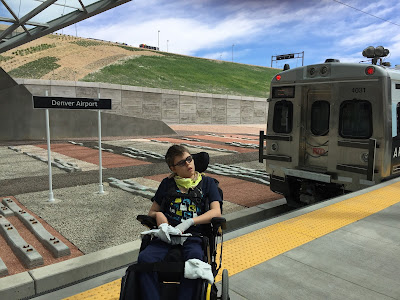 We stopped for a quick picture before the train took off again and another one came in.  It seems they were coming and going every 10 minutes.


Next it was time to take Max into the airport.  This is the part I may get a little teary eyed typing and seeing these pictures.  Max hasn't been in the airport with us in about eight years.  In all my years of flying,  I've never seen a kid in a wheelchair like Max at the airport.  Parking isn't all that accessible -- and certainly pretty impossible in his big van.  And if we were able to get him inside, there was nowhere to go -- because he can't fly, again, inaccessible.

But today, we were able to take Max on a field trip of the airport.  With as much travel as Steve has been doing lately, it was so fun for Max to get to see where Daddy goes to get on a plane.  There weren't any planes he could see because we couldn't take him through security, but he got to see everything else at the big airport!

We started with security.  We told him this was where the officers were to help check everyone's ticket before they go to their planes. 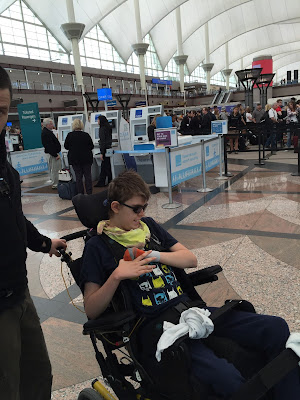 A big statue of Jeppesen, a famous aviation pioneer, who the terminal is named after. 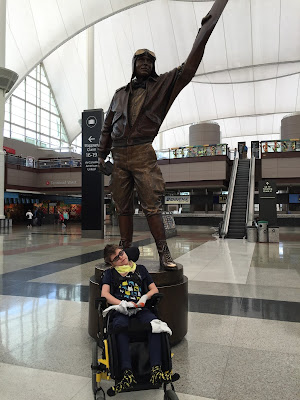 We stopped outside Customs, we told him anyone who flies to Colorado from another country has to stop here first to see more officers. 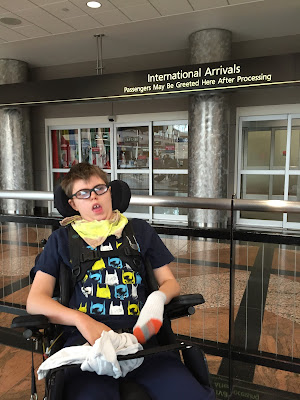 We walked across the bridge to find a moving walkway.  Abbey walked alongside him, and Steve pushed him on. 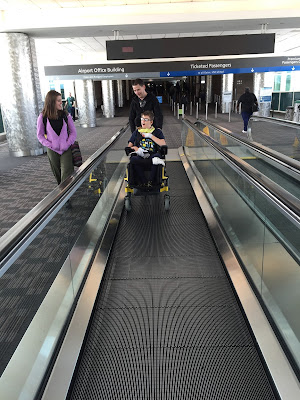 But then, wait!  Max got to move along all by himself!! 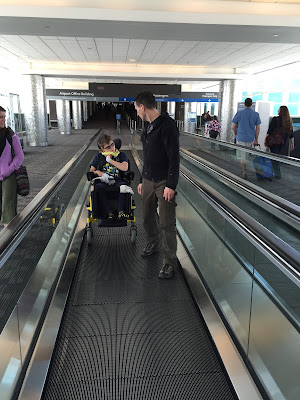 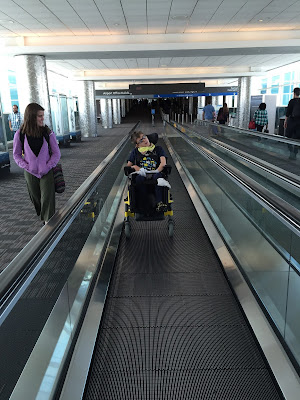 Just a big guy at the airport. 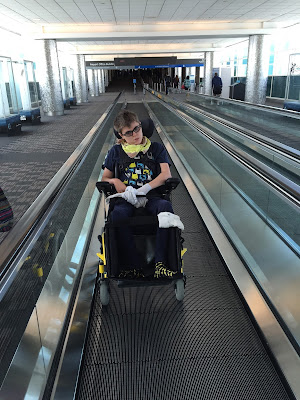 After walking around all the areas we could access in the main terminal, we took a walk to baggage claim.  There were a few stranded bags making the lonely loop around, but he thought the machines were cool and noisy. 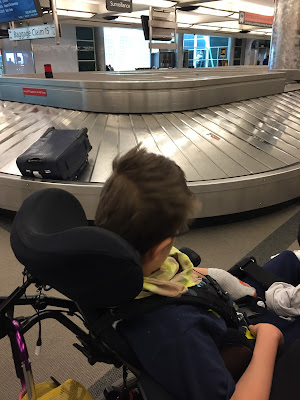 Abbey and Max caught a ride on a ski lift in the airport. 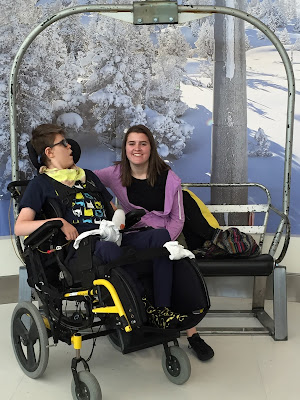 Before we headed back to the train, we took Max into the family restroom to try a pants change.  It is incredible to me the lack of facilities for people with disabilities in public restrooms.  Infuriating, unbelievable, incomprehensible.  It is something I would very much like to find a solution to for Max. So many of our outings are planned around how long until we can get Max back to his van to change his pants if he needs?  How close can we park to get him back in time before he has a melt-down?   We were able to make due with the space we had, but it shouldn't have to be such a chore. This is one of the biggest hurdles of not being able to fly with Max -- the lack of toilet options.  Such a very basic human need that we all take for granted.

We said goodbye to the airport and headed back to the trains.  We got on and as we were about to leave Max started crying.  And he cried and cried the whole way back to the park and ride.  And cried once we got to his van.  And cried all the way home.  We thought he was just over-stimulated.  Too much activity for the day.  So when we got home I put him in his dark bedroom for a rest.  I was in bed by him and asking what was wrong, why was he so upset.  We finally figured out he was so sad to leave the airport.  He was ready to go somewhere.  I told him we would have to plan another adventure to the airport soon and he eventually calmed down.

He was eager to tell his nurse tonight all about his adventure.  We will have to try another ride out to the airport again.   And this summer the train will come out our direction so it will be even easier to catch the ride to the airport!  And one day...mark my words...we will get that boy on a plane again! We will take the train to get there!

Great story! Thanks for sharing Max's adventure! I miss you guys...

Next time daddy flies call ahead and get a gate pass. You can wait at the boarding gate with him. Max could go through security and see all the planes up close!