I read this article in Nature about the CRISPR gene editing technology from a link shared on a friend's Facebook page. I started to comment, and it turned into a blog post. (It's a very good article by the way, you should read it.)

The emergence of a powerful gene-editing technology, known as CRISPR–Cas9, has elicited furious debate about whether and how it might be used to modify the genomes of human embryos. The changes to their genomes would almost certainly be passed down to subsequent generations, breaching an ethical line that has typically been considered uncrossable.

Yes, there are ethical questions surrounding it, but there are ethical questions every day in the world of human genetics. If gene editing would have been around when I was pregnant with Max...AND if I had known I was a carrier for the mutated gene that would be prominent in him...AND if the gene had even been discovered yet, would I have wanted to change the outcome of his life? I don't know.

I do know that because he was born, the world of science and medicine has changed. A new diseases was discovered, a new gene mutation that touches over 4,000 other genes. It was discovered that he only got the bad gene from me, something that had never been found before in this type of metabolic disease. And then in the other boys that they didn't get it from either parent.

When the neurologist found a small part of his brain was affected by the metabolic disease, rather than his entire brain being affected, medicine changed. Up to that point they had always thought this type of metabolic disease affected the entire brain rather than a specific area. They were able to remove that affected part instead of allowing him to continue to have 250 seizures a day for the rest of his life.  This was something that had not been done before Max.

Max has taught every medical professional and scientist who has been a part of his life new things, and for the rest of his life, he will continue to do so. What would we be taking away from the world, to make him well without this gene mutation? And what of all the other rare diseases and not so rare diseases that continue to teach doctors and scientists each day new things?

Yes, he would have had a different life. He would have been healthy - at least healthy from this disease. Our lives would be completely different than they are today. But, there would be no Max as the world knows him. And this world is better because Max is who he is. 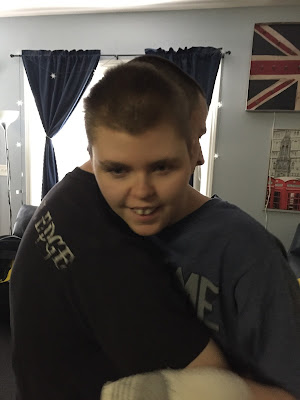 So interesting -- and mind boggling. But Max -- his smile is just radiant.