No, I want to live

In my last installment, I alluded to a story with this statement...

"my son expressed again his warrior will to live and escaped a tracheotomy by a few hours because he said 'No, I want to live.' (another good story for another day)"

In November of 2004, just after Max's first birthday, we experienced our second long hospital day. My notes from that time tell me it was 31 days in the ICU. This followed the 42 days in the ICU at four months old where he earned two brain surgeries and an exceptionally rare medical condition.

This same November he came down with bilateral pneumonia (pneumonia in both lungs). Shortly after arriving at the hospital Max required assistance breathing so he was placed on a breathing machine (ventilator, hereafter referred to as a vent). The vent is used when people can't breathe on their own. It does the work of breathing fresh oxygen in and carbon dioxide out.

Four times the doctors tried to extubate (remove the breathing tube) and four times he was unable to breathe on his own. His oxygen levels would stay at acceptable levels for a while but then the carbon dioxide would increase suggesting he wasn't pushing it out of his lungs successfully. 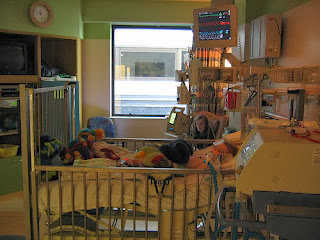 In the ICU, the doctors are on rotation for a month so you get to know the team very well. They would hope with us each time then feel the weight of the failure when we would realize that the breathing tube would need to be replaced.

I've never felt anything like the weight of this hospitalization. Words fail me today to accurately capture the gravity of that time. Fortunately, I captured words then to recall.

-
2004-11-30 01:58AM
As the snow fell outside, the tears fell inside this ICU room as I wondered where we are and how we got here. We've been through a tremendous amount this year. We have been strong in the face of tremendous odds. I have often thought "we're not the kind of people to sit in the corner of our ICU room and cry".
- 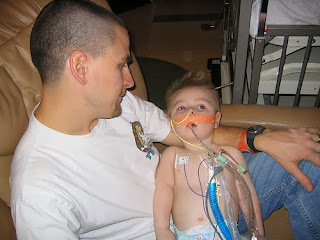 Overwhelming weight. Tremendous anxiety whether he would pull through and survive that hospitalization.

Each time they pulled the breathing tube on the four failed extubations, I would watch what felt like torture as Max displayed the force of nature he was.

Max was intubated four times total in that stay. Doctors have to weigh out if a patient is at a place to breathe on their own.  Too early and you'll have to re-intubate. Too late and the lungs forget how to breathe on their own. The doctors used a machine and technique called BiPAP (bilevel positive airway pressure) to  keep his lungs open when he was off the vent.

It was described to me as trying to catch your breath with a 60 mile per hour wind come at you constantly. To an adult or older child patient, they would explain what the machine was doing and try to calm them down. To a one year old, it's just torture.

I've never seen torture before.  But this comes as close as I ever want to be.

They would pull the tube out of Max then put this BiPAP on him. He would try so hard to breathe. He was fighting as hard as he could. He would start to make bubbles and foam from blowing so hard to exhale against the wind.

His little chest would rise and fall as he fought to try to breathe on his own. I could just imagine him thinking 'just let me try this on my own'.

His eyes would look wide and red and mad for hours until he started to grow tired.

His resolve would not relent. Not once did he quit. 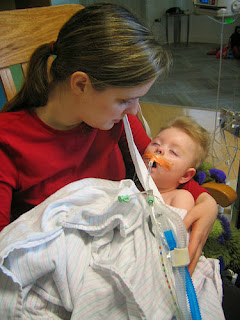 After the care conference I wrote about in my previous entry, we  agreed to the surgery to place the tracheostomy. While the weight of living in the hospital seemed overwhelming, the only choice we could make for Max was to fight.

And fight he did. Every day with every breath. And I would be damned if I was going to be the one to take away the will of this one year old warrior who wanted so desperately to live.

At one year old, he had faced death more than anyone I had ever known in my life. Every time he stood near it's icy grasp, you could feel the weight of the ocean or a mountain gale emanating from him. A force of nature seemed to ebb inside of him.

I didn't have the strength or will to stand against this force of nature who said 'I WILL LIVE'.

The first of December 2004 is a day that will permanently be etched in our memory. This is the day Max was scheduled to have the tracheostomy surgery to permanently place a breathing tube in his throat. With heavy hearts and clear minds, we made the decision to proceed with the trach if our little warrior needed this to survive.

Our minds changed over the days of considering the surgery. What initially felt like a death sentence when we first understood the implications eventually became the clear path.

I vividly recall challenging then chastising myself...

"Who am I to say a life lived connected to a machine that will breathe for them is worth any less than my life? If this simple procedure and technology will allow him to live a full and complete life, how can I possibly second guess this decision?"

Hindsight and life experience have a way of drowning out the fury of the emotions and pain at that time. It was the right decision for him at that time.

However Max had other plans. 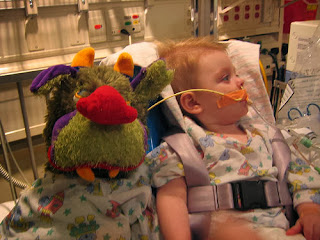 On the day of surgery, just hours before he was supposed to roll back to surgery, he coughed the intubation tube out of his lungs. He extubated himself without any assistance.

Patients aren't supposed to extubate themselves. It's never something the doctors like. The docs and nurses tape tubes in place, sometimes tie hands down. For most patients on a vent, they are in such a dire place that they don't have the ability to pull a vent tube out.

None of us thought Max had the ability to pull, let alone cough, his tube out either.

If you touch your lips then follow your throat down below your adams apple to the little notch in your throat above your collar bone, that's how far the breathing tube goes into your body.

This one year old boy who had not been able to breathe on his COUGHED THE TUBE OUT OF HIS THROAT, OUT OF HIS BODY.

He simply said "No, this is not my path."

Remember the doctors I wrote about earlier that had been on rotation in the ICU for a month - they all rotated out of the ICU on this morning I am describing.

The doctors who had seen him fail to breathe on his own for a month were gone. A brand new team of doctors rotated on with a fresh set of eyes on the situation.

When he coughed the tube up, the team of doctors rushed in after the nurse pressed the button for help. They stood around his bed and watched him breathe on his own.

They decided to let him breathe on his own until surgery (unless he started failing to breathe).

For the first time in a month of failed breathing, his oxygen and carbon dioxide levels were okay.

The surgeon walked into the ICU room to get Max before surgery. She looked at Max then Deana and said franticly "why isn't he on the vent?"

"Because he coughed the tube out of his lungs."

"Why didn't they put it back?"

"Because he's been breathing ok on his own so far."

"There is no way I'm putting a trach in a kid who can coughed a tube out of his lungs. Those kinds of patients don't need trachs."

You were right Doctor. Those kinds of kids don't need trachs.

Mighty Max had spoken and said...

We have celebrated and recognized December 1 as 'Extubation Day'  ever since.

It was the day a one year old Max took his destiny and our destiny into his hands and altered the course of all of our lives.

Maximilian Martin Watson is the first known patient with Cobalamin X, a disorder with only 15 known patients in the world. The condition was found in Max because he survived every attempt of his body to try and shutdown.

He is profoundly disabled from birth, reliant on his family for  full care including transfers, feeding, medicines, and all his needs.

He displays relentless thirst for knowledge in school, a clever humor, compassion for those he comes in contact with, and a defiant warrior spirit that insists on living and thriving when others may have already quit.

He is so healthy that doctors now refuse to guess how long he will live. He is the oldest known patient with a brand new genetic disease (announced in October 2013) so it's anyones guess how long this mighty warrior will live.

Would you consider supporting this fundraiser for modifications in his home?

I love how you tell it. I intend to donate but have to wait a few weeks to "catch up."

Thank you Elizabeth. My other half wrote this one, we each have very vivid memories of this day, and we reminisced about it before he "put it to paper."

I hope you are feeling better!