I've mentioned before that this is the third major inpatient abdominal surgery for Max since December 2010.  He has had two other not as major surgeries in the same area in that same time.  So in less than two years, his insides have been jostled and cut on five times.

There are moments when sitting in his hospital room, crouched up in his bed trying to comfort him, that I wonder how the outside world must think of these revolving hospital stays.

Of course we know that Max, and we have so many people the world over thinking of us, and keeping him in your thoughts and prayers.  But, sometimes, I wonder do you ever think this has become "routine" for us.

But, it's never routine.  Yes, we get into a routine once we're here.  We trade off who gets to sleep, we eat at the same three restaurants, we run back and forth to the house for Abbey and the dogs too.  But, it is never routine, or maybe better phrased, easy for us to see Max this sick.

Last night, Max had a really awful night.  The epidural that was placed in the operation on Saturday morning, needed to come out yesterday, and as that medicine block wore off, Max got increasingly uncomfortable.  It got to the point that he was just inconsolable.  His nurse was spread quite thin with another very sick child, and it left me in the room doing all of Max's nursing care with the occasional help of a nurse.  We have addressed this with the "powers that be", and have had a great response, to make sure it doesn't happen tonight as well.  That's the part of knowing who to escalate to, what to demand, and what to let go from previous hospital stays gets us.

The part where there's just simply nothing left to do, nothing but to try to hold him the best I can and tell him I'm so sorry he hurts, and I'm so sorry he feels sick, and I wish I could make it better.  That part isn't ever something you get used to.  Never ever.

He's a sick boy.  With what, we don't know.  He keeps getting fevers, and is far enough out from surgery that now he is going to have to have another picc line placed as a semi-permanent i.v. site to continue i.v. antibiotics.  He continues to be nauseated and retching.  And yes, we all do it...but Max...he still has not pooped, and that's just not good. 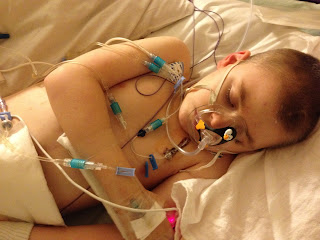 It's easy to get into these modes of feeling alone, or like we must be the only people in the world feeling so helpless right now.  Especially when I'm going on 2 hours of sleep.

But then, I step out of Max's room and go for a walk around the hospital, and am greeted by a cheerful little girl around Max's age with feather wisps of hair left on her little head in the elevator; "Floor seven please! Do you like my headband?".  Of course, it was beautiful on her balding head.  She was beautiful.  But I saw the sadness in her mother's face, and the pride.

No, we're definitely not the only ones...there's a hospital full of us, each one crouched up in our child's beds, telling our babies we're so sorry they're sick.  And we would do anything to make them feel better.   And we know we have all of you thinking of us too, and we're so very thankful.

dearest, i have no words to say. just want to be with you and hug you and the silence do the talking. May God be with you., always!

oh Deana! Just catching up after some time away, and I'm so sorry to read this news about your latest hospital visit. It's amazing to me how it gets me now - to hear another mom talk about their child struggling with anything, now that I have my own. You just want to fix them and make it better. I'm so sorry you can't just snap your fingers and make it instantly better for him. I hope the doctors can soon. Until then, we'll be thinking of you and sending good thoughts your way...