Max is still in the cocoon of the PICU this Sunday afternoon.  He is resting now, after a sleepless night for both of us.

We've been able to talk with his neurologist, who has been out of town, and we think we're on the right track with weaning him off of the slurry of seizure meds he's been on this week.

It's a strange thing being in the PICU when you're not really sick.  I don't especially like being in the PICU with Max at any time.  But, what a luxury we live where we do, and have great insurance to afford a week long stay in the PICU, just to make him comfortable as he is weaning off of too much seizure medicine.

Max is on a sedation medicine called precedex.  It's unlike any other we've used with him before, in that he can wake and interact with us in between resting.  Unlike other sedation medicines where he's knocked out and we see his eyes a week or more later.  It's been nice because he's been able to wake up and we're able to tell from his facial expressions, and voice that he's feeling much better, just really being affected by the seizure medicine overload.  (Not overdose...he was never in danger of overdose, just a bit too extreme for what was happening.)

I'm hoping we're out, and back home soon this week.  It is still enough time to pull off a Christmas.  And one outside of the hospital is what is on all of our Christmas lists this year! 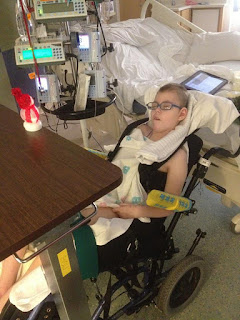 Max sitting up in his chair, listening to opera Christmas music, and peeking at this flashy snowman from his buddy Calvin. 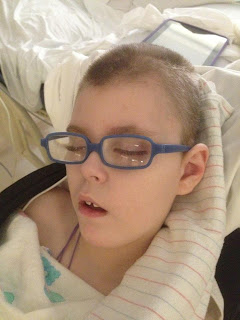 Having a peaceful rest.

Rooting for a peaceful and fun Christmas at home for the Watsons! Love, hugz, and prayers!