The birds are chirping.

The trees are blooming.

The early vegetables have poked their leaves out of the cold dirt.

The sun is out later, and we're going to the park every weekend.

It's that time of year, SPRING is here!

Spring also means we get to start going in for follow-ups with Max's doctors. They usually see us as late as possible in the Fall, and then say they don't want to see Max until respiratory season has passed. Last year was a bit mixed up with Max getting so sick in December. But, we've been able to stay away from the hospital for a few months.

We had two appointments for Max this week. We started with an EEG and Neurology appointment. The EEG tech was a little different...as they all seem to be! But, this time was a first, we had one that kept nodding off during the test. It really made me laugh. We were sitting there with Max, so I wasn't concerned at all, but man oh man...who falls asleep on the job?

After the EEG, we went to see his neurologist. He got a kick out of Max's book report. He's so impressed with his progress in school. He's surely proud of this little guy! And we are too. It was a great follow-up, and we'll see him again in a few months.

He didn't have any changes for Max right now, and his EEG looked good. It's been 7 months since we got control of his seizures. That's the longest he's ever gone. I do a lot of knocking on wood when I say that out loud!

Today he had an appointment at the dental clinic. I was amazed at how well he did this time. We got to see his x-rays from September, and he's got all of his teeth behind the baby teeth. One replacement for each baby tooth. No cavities, not a lot of cleaning needing to be done. He even let the dentist put on the floride rinse and the sealant, after he scraped and brushed his teeth.

Next week we'll go in for a weight check and to see his pediatrician. He's lost some weight, according to the scale in the Neurology office, which was enough to make them question if he's getting enough calories as he is growing. But, I don't imagine it will be much more than adding some more calories.

And we'll hopefully get his glasses, next week too. Of course, I think he's got something going with his current ones. 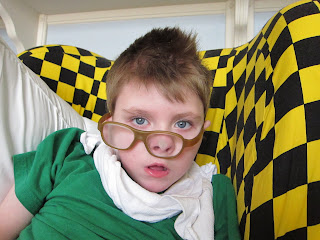 It's always nice to impress your neurologist Mr!